Dmitriy Salita: Vladimir Shishkin has the ingredients to be champion 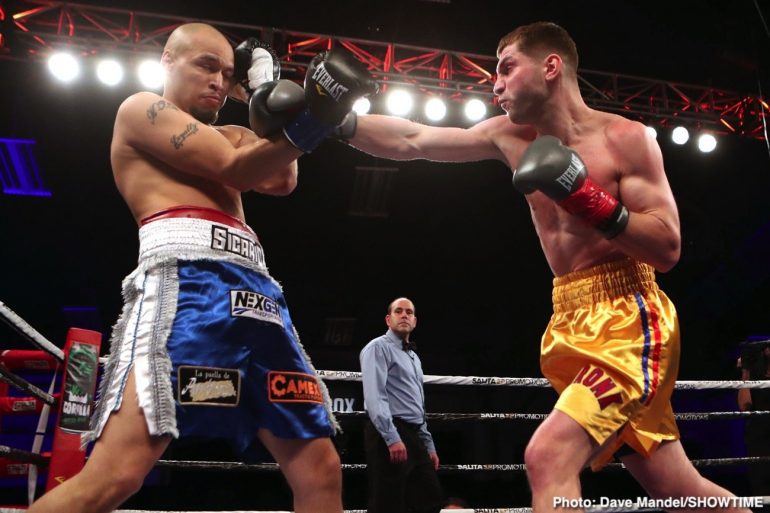 After accumulating victories on a handful of “ShoBox” telecasts, Salita is eager for Shishkin to showcase his talent in meaningful opportunities on larger platforms later this year.

Shishkin will face Jeyson Minda Saturday night at the Ford Community Center, in Dearborn, Michigan, not far from his adopted hometown of Detroit. The eight-round bout will be a part of the “Detroit Brawl” card that will air two days later on Salita Promotions’ Detroit Brawl YouTube page.

Saturday will mark Shishkin’s first fight since February 17 of last year, defeating once-beaten Sena Agbeko by unanimous decision. Shishkin (12-0, 7 knockouts), who is originally from Stepnoe, Russia, has stopped five of his last seven opponents, including TKO wins over Oscar Riojas and DeAndre Ware. His most notable win was a knockout over former light heavyweight title challenger Nadjib Mohammedi in October 2018.

Shishkin had a fight lined up last year but had to withdraw after testing positive for COVID-19. Salita is hopeful the unbeaten fighter can fight often in 2022 with a significant bout taking place later this year.

“Last year was a challenging year for Vladimir,” Salita told The Ring Wednesday morning. “He was supposed to fight in an IBF eliminator against [unbeaten] Evgeny Shvedenko but contracted COVID during training camp. Now recovered and healthy, we wanted to get back in the ring. He is training with SugarHill Steward.”

With Alvarez moving up in weight to challenge WBA light heavyweight titleholder Dmitry Bivol on May 7, some wonder whether Alvarez will indeed return to 168 pounds. Part of a two-fight deal he recently signed with DAZN has Alvarez facing IBF middleweight titleholder Gennadiy Golovkin in a rubber match in September. Golovkin will have to defeat WBA titlist Ryoto Murata on April 9 for that fight to take place.

Salita believes the likelihood of Alvarez fighting again at 168 pounds is slim to none, which would create opportunities for vacant world title fights. Alvarez currently owns all the super middleweight title belts but Salita hopes Shishkin can fight for a vacant title if another eliminator is not secured and Alvarez decides to remain at 175 pounds.

“The goal for Vladimir is to fight for a world title,” said Salita. “[It] seems that Canelo will vacate and there will be opportunities for [Shishkin] to showcase his world-class abilities.

“He is rated across the board and, on a given night, beats the top super middleweights. [Editor’s note: Shishkin is currently ranked No. 9 by the IBF and No. 15 by the WBO at 168 pounds.] Our goal would be to get him a significant fight in the near future.”

Salita remains high on Shishkin, despite his fighter having only 12 pro bouts, and is confident he can make a name for himself against any of the world titleholders and contenders in the division. Salita believes Shishkin is eager to make a statement against Minda Saturday night.

“We feel he has all the ingredients to be a world champion,” said Salita. “He is one of the top five super middleweights in the world.”

Minda (14-6-1, 8 KOs), who is originally from Ecuador and now resides in Salem, Massachusetts, lost by unanimous decision to unbeaten Sean Hempnill in his most recent bout on January 7. Minda has lost his last five bouts.

In the main event, heavyweight prospect Moses Johnson (8-0, 7 KOs), of Huntington, New York, will square off against Saginaw’s Robert Simms (11-3, 3 KOs) in an eight-round bout.