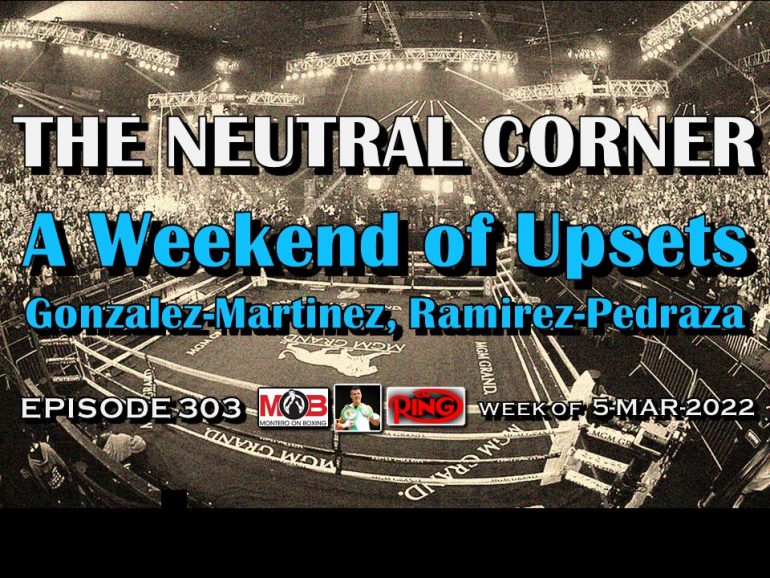 On episode 303 of The Neutral Corner boxing podcast, host Michael Montero commented on Ukrainian boxers taking up arms to defend their country from the current Russian invasion. Vitali and Wladimir Klitschko, Oleksandr Usyk, Vasiliy Lomachenko and others have recently travelled to their homeland to join the fight.

On Saturday, February 26, there were several notable upsets around the world. In Dubai, Vincent Astrolabio of the Philippines dropped Guillermo Rigondeaux in the final round of their bout, securing a UD10 victory. In Scotland, mandatory challenger Jack Catterall dropped undisputed junior welterweight champion Josh Taylor but lost a highly-controversial split decision. Many fans and members of the media alike felt Catterall deserved the win.

In Las Vegas, Fernando Martinez scored an upset UD 12 win over Jerwin Ancajas, taking his IBF junior bantamweight title back home with him to Argentina. The fight, which shattered CompuBox records with 1,862 total punches thrown, kicked off a tripleheader on Showtime. In the co-main, undefeated junior welterweight prospect Gary Antuanne Russell scored a TKO 10 win over veteran Viktor Postol (who flew home to his native Ukraine the following day). And in the main event, Hector Luis Garcia scored an upset UD 12 win over the previously undefeated Chris Colbert in a junior lightweight bout. Garcia, a native of the Dominican Republic and 2016 Olympian, earned a mandatory position with the win.

On Sunday, February 27, Lawrence Okolie successfully defended his WBO cruiserweight title with a UD 12 win over Michal Cieslak in London. The bout headlined a Matchroom card that was broadcast on DAZN.

“Taylor looked like a skinny little kid against Catterall,” said Brian. “I thought he was sick or something. He just looked different to me than when he fought Ramirez.”

“Taylor got some home cooking, even though he doesn’t want to admit it,” said Nacho. “But honestly I feel that Catterall left that fight on the table for Taylor to take.”

“I don’t think Taylor versus Catterall was a close fight,” said Hamed. “I just don’t see how anybody could say that fight could have gone either way. I thought this was a worse decision than the first Ward versus Kovalev fight.”

“Jerwin Ancajas had nine title defenses against a who’s who of nobody,” said Marquis Johns, a writer for nyfights.com. “Fernando Martinez looks like he’s going to be a problem. It’s fun watching these guys at 115 pounds because they throw punches.”

“It’s kind of crazy that the PBC gave us a really good card on Saturday,” joked Jimi DeMarino. “They actually matched their guys tough and it blew up in their face.”