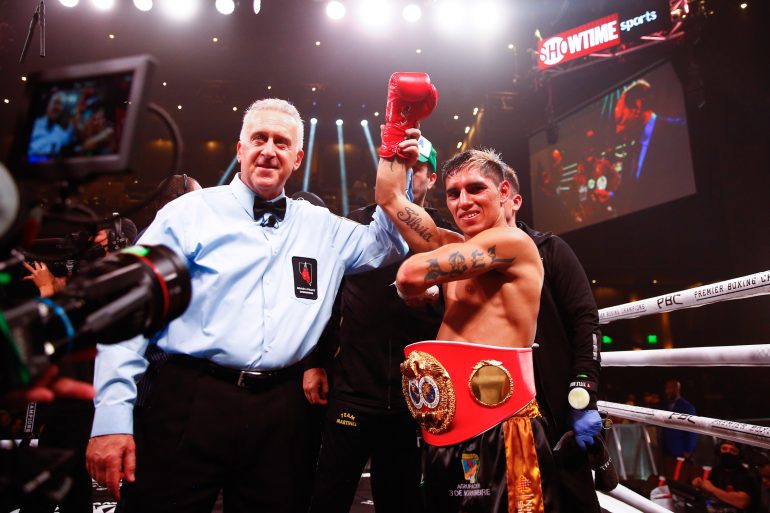 Fernando Martinez pulled off a shocker in the first fight on Showtime Championship Boxing on Saturday night from The Chelsea at The Cosmopolitan of Las Vegas, in Las Vegas, Nevada, wresting the IBF junior bantamweight title from long-standing beltholder Jerwin Ancajas by easy unanimous decision.

“It’s very emotional for me,” Martinez said. “My mother, my kids, my father. There is so much I’m emotional about right now. I’m at a loss for words. This is a dream come true. I made my dad’s dream come true. He’s not here tonight but he always said I’d be standing here one day. And now I’ll be able to buy my mom a house.

“I haven’t even fallen to earth yet. This was my dream since I was 11 years old! Before the fight, I would ask myself what it would be like to bring the belt home to my mom in Argentina. I made that dream come true.

“The pose I do after the fight is because I have my mom and my dad tattooed on each arm and I want the world to see them. Everything I do, I do for them.”

In the second, it seemed Ancajas, fighting southpaw though he’s naturally right-handed, found his range. Still yet, Martinez appeared to be more active and it showed by winning the round.

Sensing the fight was getting away from him early, Ancajas, making his 10th title defense, stepped up his work rate, pulling even after four. As the rounds wore on, however, Martinez seemed to be gaining strength and Ancajas was withering.

Something highly unusual took place between the seventh and eighth rounds. When Ancajas returned to his corner, he was greeted with the unsettling news by his trainer, Joven Jimenez, that he was losing the fight. Through seven, Jimenez may have been right. Punch stats bore out that Martinez had out landed Ancajas 201-96 in power punches.

In fact, Martinez had outlanded Ancajas in power punches in every round, doubling Ancajas’ output in the fifth, sixth and seventh rounds. Martinez unloaded on Ancajas inside the pocket, and Ancajas would rarely answer.

“I want to unify titles and fight the best,” Martinez said. “I fought a warrior tonight, and I made the seemingly impossible, possible.”

“I am so thankful for Team Martinez for making this fight,” Ancajas said. “Yes, I’ll do a rematch and do everything next time to achieve my goals. I learned a lot in the fight and he was a great challenger.

“It was not my best night, but I’ll be back. Martinez was a very tough opponent and I give him credit for performing well tonight. I’m glad that we could give the fans a great fight with a lot of action.”