Keith Thurman vows to regain ‘One Time’ killer instinct, aims for the top at 147 pounds 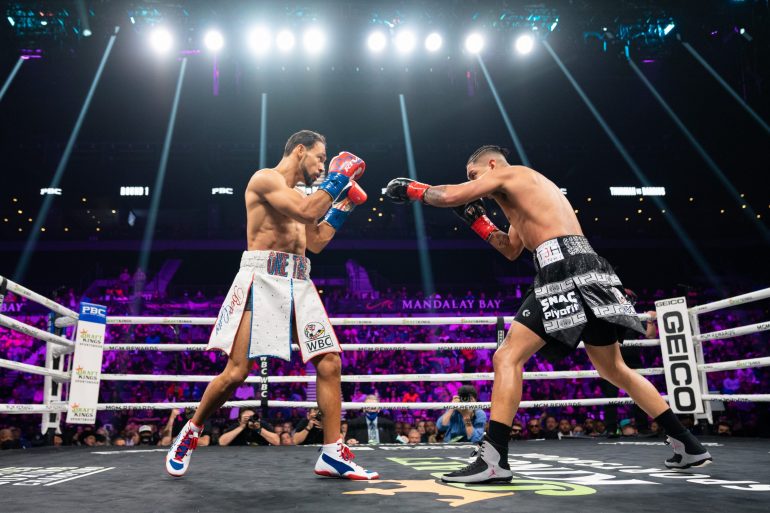 LAS VEGAS – Has Keith Thurman lost some of his killer instinct?

Thurman (30-1, 22 KOs), who returned to the ring following a two-and-a-half-year layoff Saturday night, battered Mario Barrios (26-2-2, 17 KOs) for much of the first half of their WBC elimination matchup but wound up settling for a 12-round unanimous decision win.

“You know, 12 rounds [of] championship boxing is just that different level. The last thing you want to do is try to get somebody out of there, fall short, and not have the gas for the later rounds.”

The former unified welterweight titleholder explained the adjustments he would need to make in training to regain the explosive power that led to his nickname “One Time.”

“Once when I land a nice shot, I need to be able to rush, rush, get back on that Mike Tyson, right? But you know Mike Tyson, some people say, was only a four-round [to] six-round fighter because he put so much energy in those early rounds trying to get those knockouts, so it’s a double-edged sword.”

Thurman, who hails from Clearwater, Florida, admitted he has disregarded high-interval training for the entirety of his career, but that would no longer be the case.

“I know the sport science and how to be crafty enough in boxing,” said the ex-champ before embellishing. “It takes a different high-interval training. Here is one modality from my sports nutritionist of a form of training that I’ve never used up to this day, and I’m gonna stop neglecting that because I think that’s the one thing that I’m missing when it comes to finishing off these opponents. And I do believe that once I have that missing piece, that I can once again be at the top of this welterweight division.”

Thurman has not scored a knockout since July 2015, when he stopped Luis Collazo inside seven rounds. He followed that performance with a title-winning effort against Shawn Porter to win the WBA strap in June 2016. Thurman unified the WBA and WBC titles in March 2017 with a split decision victory over Danny Garcia, but post-fight surgery on his elbow kept him out of the ring for the next 22 months.