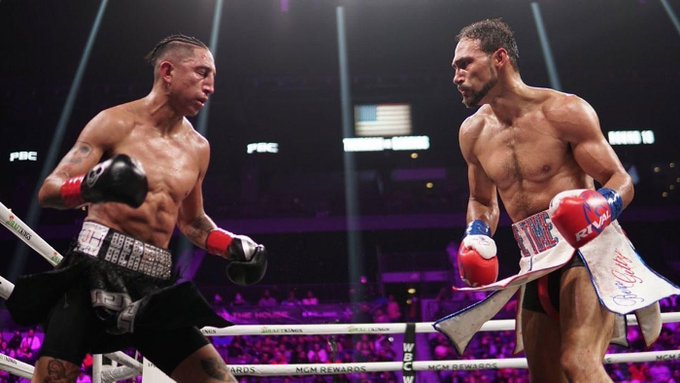 LAS VEGAS — After another significant layoff caused by injury, Keith Thurman returned to the ring with a new haircut but was ultimately triumphant in a vintage performance Saturday night at Michelob Ultra Arena.

Thurman looked sharp and imposed his will and skill in an entertaining unanimous decision win over a game but very outclassed Mario Barrios. Barrios took an all-time beatdown but exemplified his grit and toughness in a brutal fight.

Thurman won on scores of 117-111 and 118-110 twice in the main event of a FOX Sports pay-per-view broadcast to claim his first win in over three years.

The 33-year-old Thurman (30-1, 22 KOs), of Clearwater, Florida, won the WBA 147-pound title with a competitive unanimous decision win over former titlist Shawn Porter in June 2016. Thurman followed that performance the following March with a one-sided victory over Danny Garcia to unify the WBA and WBC welterweight titles. However, due to post-fight surgery on his elbow, Thurman would not fight again for the next 22 months.

After relinquishing the WBC title in April 2018, Thurman returned in January 2019 with the WBA title still in his possession. He retained the belt in an entertaining majority decision win over a game Josesito Lopez. Thurman then suffered his first loss the following July when he was floored in the opening round by all-time great Manny Pacquiao, who eked out a split decision win to become the oldest 147-pound titleholder in history at the age of 40.

However the injury bug gripped Thurman again, who underwent surgery to address prolonged pain in his left hand. That was 931 days ago.

“This was a comeback fight after two-and-a-half years away. I wish I had my best performance but I did the best I could under the circumstances,” Thurman said.

Although Thurman, who is currently unranked by The Ring, had not boxed in over 30 months, his timing and rhythm were on point from the onset. Most importantly, he came out of the fight with no reported injuries. 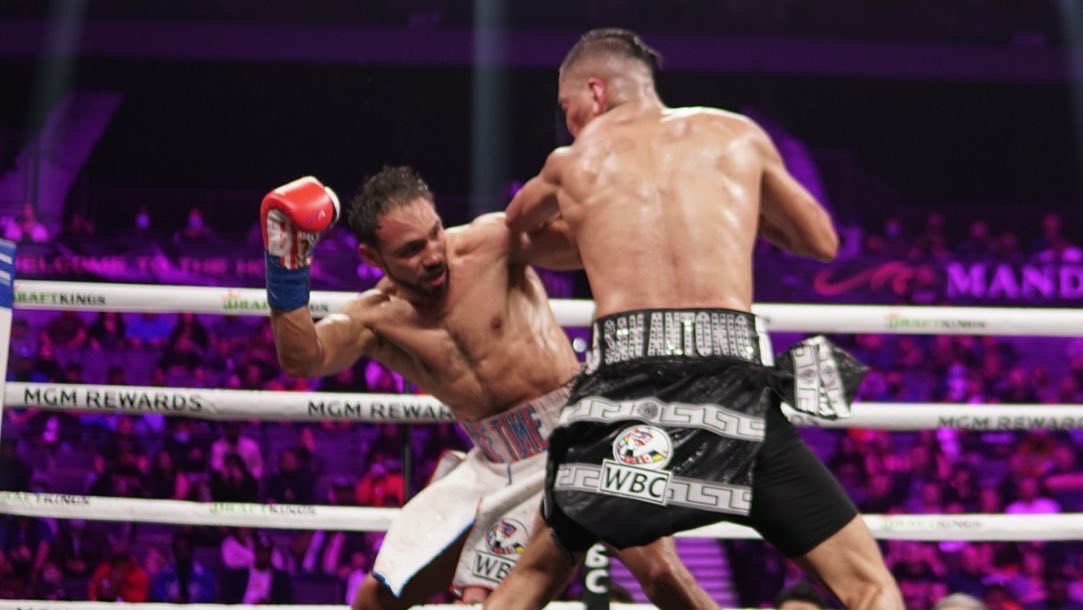 Both fighters came out of the gate firing like cannons. However they didn’t manage to land a telling blow but Thurman got off to the better start, connecting with several left hands.

Barrios, who moved up to 147 pounds following an 11th-round stoppage loss to Gervonta “Tank” Davis for a secondary junior welterweight title, last June, came out swinging to start the second round. However Thurman successfully connected. “One Time” found a home for the left hook, which knocked Barrios back toward the ropes.

Thurman looked for the home run shot with less than 10 seconds remaining in Round 2 but Barrios evaded the right-hand bomb.

Thurman clipped Barrios with a series of left hands, an uppercut and a left hook that clearly affected Barrios to kick off the third frame. Thurman doubled down on the onslaught and connected with another slew of lefts and rights that buckled Barrios’ legs.

“I had good timing. I rocked him a few times. I wish I was able to commit a little bit more,” Thurman added. “I learn from every outing and I know what I need to do when I get back in the gym so I can dominate the welterweight division once again.” 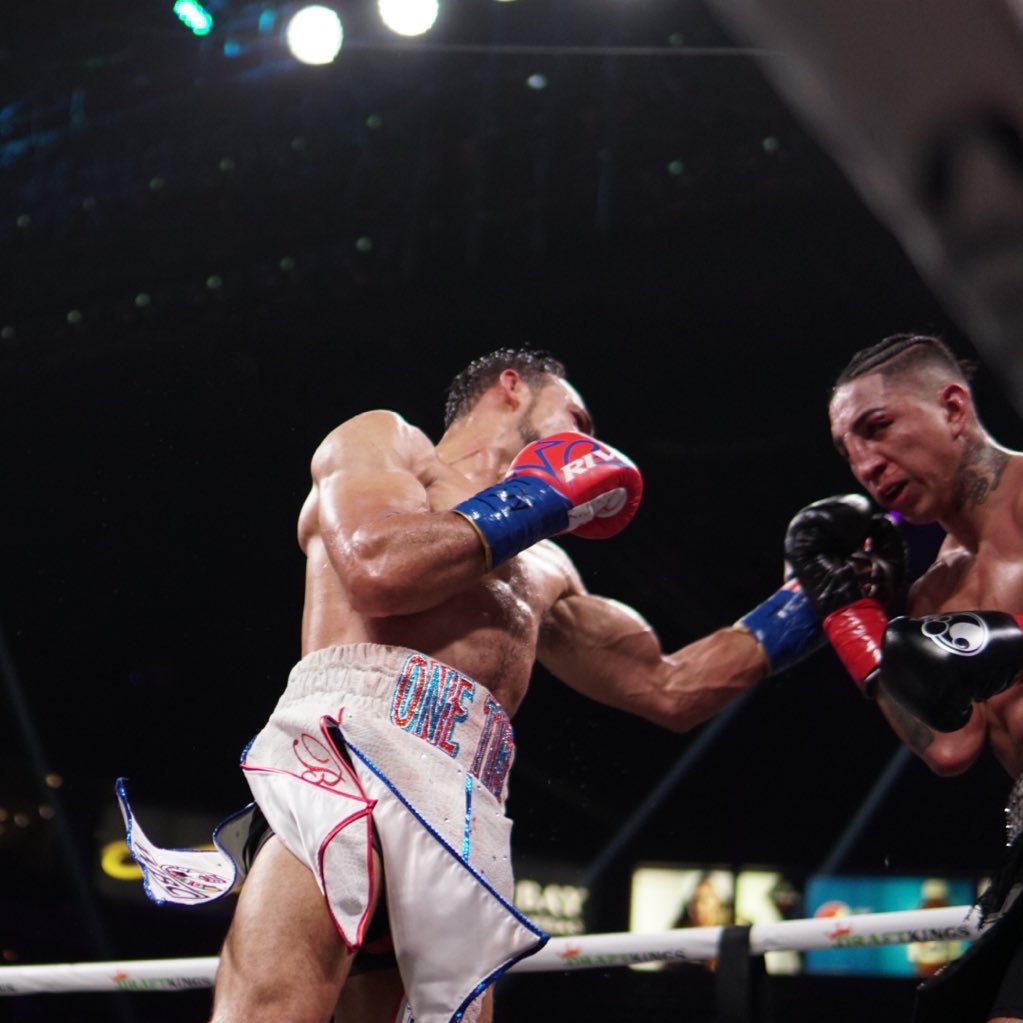 By the fifth, Barrios was bleeding from his nose and the right side of his mouth looked like a poster for a balloon company.

Barrios (26-2, 17 KOs) flickered the pedal in the sixth round, landing with a few body shots, which had little effect. Moments later, Thurman clobbered him with a lead left hook that nearly separated Barrios from the rest of his body, yet somehow he managed to stay upright.

A hellacious right hand from Thurman opened up a grisly cut around Barrios’ left eye in the eighth but Barrios countered Thurman with his best shot of the night, one to the body that had him briefly gasping for breath.

.@keithfthurmanjr connects with a punch that opens a deep cut over Barrios’ eye. @Boxer_Barrios responds with a body shot that sends Thurman reeling. Round 8 was mean 😤! #ThurmanBarrios pic.twitter.com/QNMHIKAldB

Thurman froze Barrios in his tracks in the 10th round with a left-right combination. Both fighters exchanged flush shots near Barrios’ corner, although they didn’t seem to be fazed by either effort.

In the 11th round, Thurman went down after losing his balance. After referee Kenny Bayless ruled the clear slip, Barrios, whose nose was mangled to the point of possible disconfiguration, connected with a right hand.

Thurman and Barrios traded leather to begin the 12th frame. Barrios attempted to mount an offensive attack but Thurman seemed comfortable keeping his distance and cruising to his first win since 2019.

“Tonight I showed the Mexican warrior in me. I take my hat off to Keith Thurman; he’s a warrior as well,” Barrios said. “We gave the fans a great fight.

“I thought I made a great introduction into the welterweight division and I’m ready to fight all the big names. I’m always going to give the fans an explosive night of boxing and I can’t wait to get back in there.”

Barrios has now dropped two in a row, while Thurman moves on to greener pastures.

“This was a great start to a long comeback in 2022. I hope the fans enjoyed it. I’m happy to be back and I’m looking forward to the rest of the year,” said Thurman.