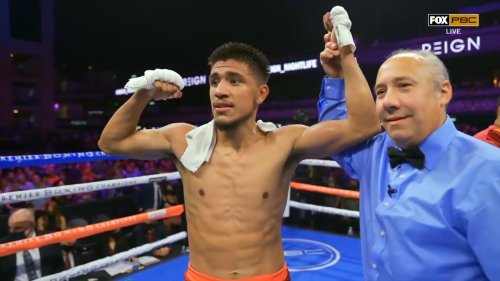 Coming off a dominant performance over Devon Alexander last August, the welterweight up-and-comer agreed to face hard-hitting Abel Ramos as a late replacement with just over a week’s notice.

But it wasn’t an easy night. In the opening round, Santamaria got buzzed and hurt but recovered to defeat the powerful Ramos in a 10-round unanimous decision Saturday evening at Mandalay Bay Resort and Casino’s Michelob Ultra Arena in Las Vegas.

Judges Dave Moretti and Patricia Morse Jarman scored the bout 96-94 for Santamaria, while Lisa Giampa had an oddly wide score of 98-92.

Ramos (27-5-2, 21 KOs), of Casa Grande, Arizona, was initially tabbed to face Josesito Lopez as part of the PPV telecast, but those plans were abandoned after Lopez was injured during training camp and was forced to withdraw.

Instead, the 30-year-old had to face Garden Grove, California’s Santamaria (13-2-1, 7 KOs), who has been more or less a spoiler in his last four fights. In August 2020, he scored an upset win over Mykal Fox, was a victim of controversial scoring against Paul Kroll, and followed that up with a one-sided win over a former two-division titlist in Alexander.

But this fight had all the makings of a serious risk for Santamaria. He accepted a fight on short notice against a fighter known for fight-changing power. Ramos nearly beat undefeated WBA welterweight titleholder Yordenis Ugas in August 2020. Cuba’s Ugas, of course, sent all-time great Manny Pacquiao into retirement last August.

It seemed that perhaps Santamaria had bitten off more than he could chew after getting caught with a crisp right hand in the first round. However, he regained composure and countered Ramos with his jab and lateral movement.

Ramos clipped Santamaria again at the end of the third round, but Santamaria was able to make it out of the round.

Ramos, who lost for the second time in three fights, tired out in the last couple of frames, allowing the 24-year-old Santamaria to dictate the pace and back him up toward the ropes.

For Santamaria, it was the most notable victory of his seven-year pro career.