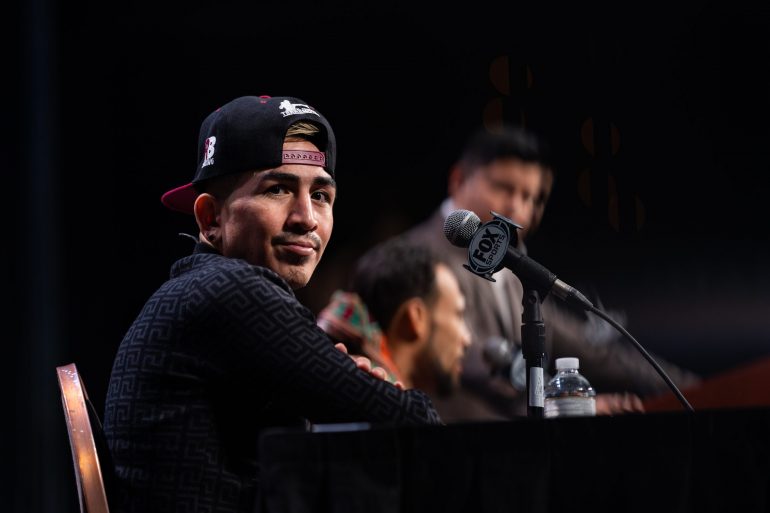 Leo Santa Cruz may be making his third straight start at 130 pounds, but the reigning WBA featherweight titleholder says he still has plenty of business to handle at 126 pounds.

Santa Cruz (37-2-1, 19 knockouts) faces Keenan Carbajal (23-2-1, 15 KOs) this Saturday in a ten-round non-title bout on the Keith Thurman-Mario Barrios pay-per-view card at the Michelob Ultra Arena in Las Vegas, Nev. He says the plan next would be to move back down to 126 pounds, where he feels he is at his most effective.

“I think I can unify at 126, I can try to win more belts at 126, beat other champions and if the opportunity comes, move up to 135 and go for the fifth world title.”

One fighter on his radar is the new WBC featherweight titleholder Mark Magsayo (24-0, 16 KOs). The undefeated Filipino sprung a massive upset last month with his majority decision win over long-time titleholder Gary Russell Jr., and presents a similarly aggressive style to the Mexico-born, Los Angeles based Santa Cruz.

Santa Cruz says he had only seen parts of the Russell-Magsayo fight, but is well acquainted with Magsayo’s style.

“He’s a strong fighter, comes forward like a true warrior comes forward, throwing punches. I think a fight against him would be really good. It would be tough, entertaining and it’d be a war, back and forth,” said Santa Cruz.

“Hopefully it happens, it is going to be a classic war. Let’s revive the Filipino-Mexican boxing rivalry. It is good for the fans and for boxing,” said Magsayo. 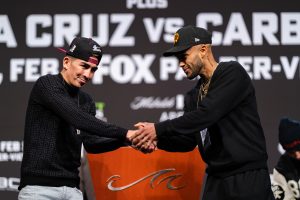 The fight could be easier to make than most other unification fights at 126 pounds, given that both are aligned with Premier Boxing Champions, though their biggest hurdle in the meantime appears to be with the sanctioning bodies. Santa Cruz, who won the title back after avenging his previous defeat to Carl Frampton in 2017, hasn’t defended his 126-pound title since defeating late replacement Rafael Rivera by decision in 2019.

He is likely to be mandated to face the winner between WBA “regular” titleholder Leigh Wood and Mick Conlan, who will face off in the United Kingdom on March 12.

Magsayo also has a mandatory on the horizon against former WBC junior featherweight titleholder Rey Vargas.

Aside from Magsayo, Santa Cruz says a fight with WBO titleholder Emanuel Navarrete (35-1, 29 KOs) would make for the most exciting at 126.

Santa Cruz, who has won world titles at 118, 122, 126 and 130 pounds, will be fighting for the first time since October of 2020, when he was knocked out cold by a single uppercut from Gervonta Davis in the sixth round. Rather than making him reluctant to return to the ring, Santa Cruz insists that hanging in there so long against such a big puncher, who then stopped the much larger Mario Barrios in his subsequent fight, gives him more confidence.

“People think I’m not gonna be the same, that maybe I got fear from that knockout. The truth is, instead of getting more fear, I got more confidence because I was able to stay there for five rounds, I was banging with him. I tangled with a heavy hitter. For me to be able to compete with him, that gives me the confidence,” said Santa Cruz.

First he must get past Carbajal, a 30-year-old from Phoenix who has won 18 straight fights, but hasn’t fought anywhere near the level of talent that Santa Cruz has. Carbajal, the nephew of boxing great Michael Carbajal, has only fought up to the ten-round level, and has fought mostly in his hometown or in Mexico.

Still, Santa Cruz insists these kinds of fights tend to be most dangerous.

“He’s taller than me, and then yesterday at the face-off I saw that he’s longer. But I like those fighters because I can go in, break them down little by little to the body and that’s what I’m gonna do.”