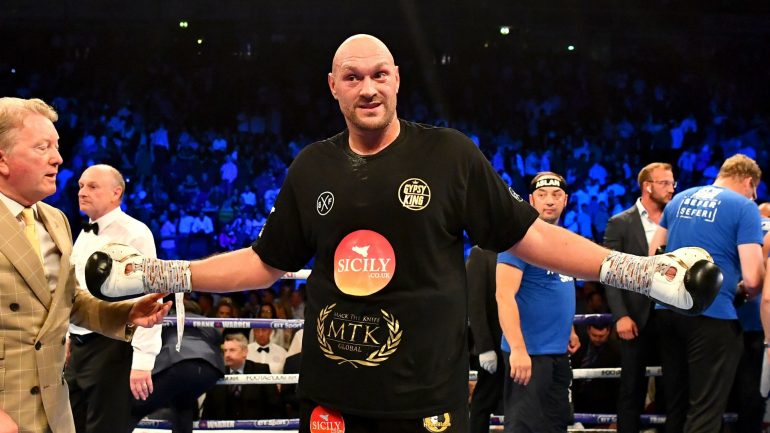 Tyson Fury and Dillian Whyte have more time to secure a deal.

A purse bid for the ordered clash between Tyson Fury, The Ring Magazine/WBC heavyweight champion, and Whyte, has been postponed for the fourth time.

The initial purse bid was set for January 11 before a plethora of delays. However, longtime WBC president Mauricio Sulaiman assured Wednesday this would be the last extension.

“The World Boxing Council has received once again requests from the teams of Tyson Fury and Dillian Whyte, to extend the period of free negotiations,” he stated. “The WBC has granted this final extension, and If there is no agreement, a purse bid will be held this coming Friday, January 28.”

BoxingScene was the first to report the news.

As previously reported, Fury (31-0-1, 22 KOs) will receive 80 percent of the pot, with Whyte, an interim titlist, earning the remaining 20 percent. An 80/20 purse split is typically the norm for a fight between a full beltholder and an interim champion. But The Ring’s No.4 heavyweight contender seeks as much as 45 percent of the stack, which could prevent the fight from happening altogether unless both sides can come to an agreement within the next 48 hours.

As previously reported by The Ring, Fury hopes to fight again as early as March 26, but that appears to be tracking towards the unlikely category. The 33-year-old is also actively campaigning for an undisputed matchup between himself and three-belt unified titleholder Oleksandr Usyk (19-0, 13 KOs). However, Usyk must fight former champion Anthony Joshua, whom he defeated last September, a second time after the 2012 Olympic gold medalist exercised his contractual right to an immediate rematch. The only way Usyk can get around the blockade is if Joshua accepts step-aside money to allow Fury-Usyk the fight to take place. ‘AJ’ is currently contemplating an undisclosed —and previously misreported— offer. But if a deal is not reached, Whyte, who was also provided a step-aside agreement, could get his lucky break depending if Fury’s team is willing to compromise with his demands.

Fury won the WBC title via seventh-round knockout in a February 2020 rematch against Deontay Wilder in Las Vegas. The victory officially began his second and present reign as heavyweight champion. Fury outpointed Wladimir Klitschko in a November 2015 upset to become a unified titleholder before a backdated two-year drug testing suspension coupled with a much-public battle to combat alcohol and drug abuse kept him out of the ring until 2018.

Whyte (28-2, 19 KOs) is a perennial contender who has often been a victim of boxing politics. The Brixton-based heavyweight was brutally knocked out by Alexander Povetkin in September 2020, a loss which was avenged by ‘The Body Snatcher’ last March when he stopped the now-retired slugger inside four rounds.