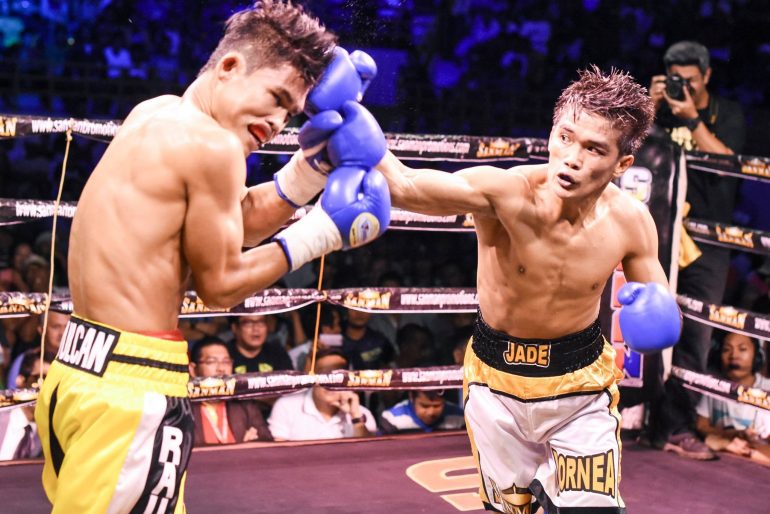 Jade Bornea may not be a widely known name in boxing, but he’s no stranger to fighting world class fighters.

At the 2013 ASBC Asian Confederation Junior Boxing Championships in the Philippines, Bornea opened the tournament by scoring a third round stoppage of current IBF/WBA junior featherweight titleholder Murodjon Akhmadaliev, before narrowly outpointing future three-division champion Kosei Tanaka in the finals. Bornea says he knew that he was in the ring with fighters who’d be holding belts one day.

“They were both very strong and talented,” Bornea, now 16-0 (10 knockouts) as a professional, tells The Ring.

Now, the 26-year-old from Arakan, Cotabato del Norte, Philippines is looking to show he can hang with the top boxers in the pros as well, beginning with his fight this Saturday against Mohammed Obbadi at the Auditorio Jacales in Monterrey, Mexico. The bout will be an elimination bout for the IBF junior bantamweight title, currently held by Jerwin Ancajas, also of the Philippines.

Bornea, who began boxing at age 10 under his grandfather, is one half of a twin combo that also includes Jake Bornea, a 14-3-1 (7 KOs) boxer best known for his 2016 loss to Andrew Selby at Wembley Arena in the United Kingdom. While Jake is a strictly pressure fighter, Jade has shown more versatility, switching it up to box when he needs to.

Jade Bornea showed he could win on the road, handing the previously unbeaten Ernesto Delgadillo his first defeat by split decision in January of 2020 in Washington state. Bornea has fought just once since then, shutting out the overmatched Rolan Biendima last April in a closed venue show promoted by his promoter, Sanman Promotions, in General Santos City.

Obbadi (22-1, 13 KOs), a Morocco native who is now based in Italy, will be fighting outside of Europe for the first time, having fought all but one of his bouts in Italy. Obbadi has fought mostly light competition, outside of a single step-up bout, when he was stopped in seven rounds by Cristofer Rosales, who ended up winning the WBC flyweight title the following year.

Bornea, a switch-hitting right-handed fighter, describes the 28-year-old Obbadi as more of a boxer, and promoter Jim Claude Manangquil says he’s confident that his guy will hand Obbadi his second defeat.

“It will not be easy for Jade. Jade needs to be on his A-game. But I’m confident Jade wins. He trained so hard in Los Angeles,” said Manangquil.

Bornea has been in Los Angeles with the Filipino coaches since September, getting world class sparring and guidance in LA.

The winner will be the logical next fighter in line for Ancajas, who has made nine defenses of the IBF junior bantamweight title since winning it in 2016. Ancajas had been scheduled to unify the belt with WBO titleholder Kazuto Ioka on New Year’s Eve, but that fight was nixed after Japan closed the borders due to the Omicron coronavirus variant. Instead, Ancajas is expected to make his second consecutive voluntary title defense in February, which would make him overdue for a mandatory defense.

Manangquil says they’d prefer to face someone other than Ancajas for the belt. He says they’d be willing to wait for Ancajas to move up to 118 pounds in the near future instead of facing another Filipino boxer.

For Bornea, his focus is solely on the task at hand.

“I’m thinking about this fight first now. When I win, my manager will take care of it,” said Bornea.

Ryan Songalia has written for ESPN, the New York Daily News, Rappler and The Guardian, and earned his Master’s degree from the Craig Newmark Graduate School of Journalism Class in 2020. He can be reached at [email protected]