Steve Geffrard: Short notice or not, Joe Smith is a tough opponent for anybody 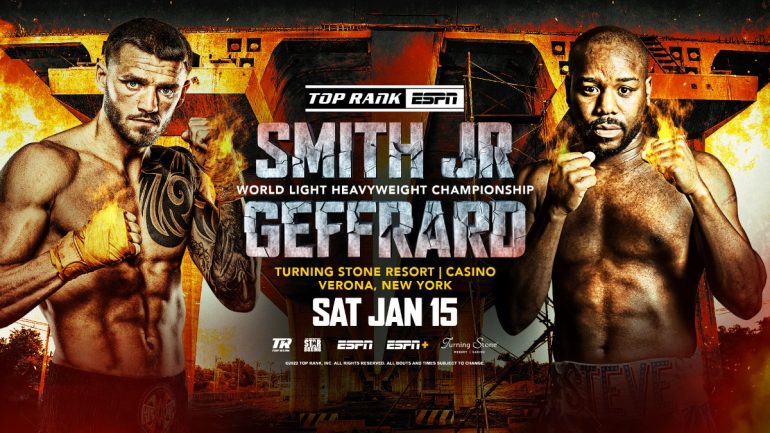 He has sparred with the best. Now Steve Geffrard is ready to fight against one of the best.

On Friday, Geffrard agreed to step in as a replacement opponent for Callum Johnson, who tested positive for COVID-19, versus WBO light heavyweight titlist Joe Smith Jr. with just over a week’s notice. Smith will make the first defense of his title January 15 in an ESPN-televised main event from Turning Stone Resort Casino in Verona, New York.

Geffrard (18-2, 12 knockouts), 31, told The Ring Saturday morning that he didn’t hesitate to accept the daunting task as he was already preparing to fight Argentina’s Gonzalo Andreasen (7-8, 6 KOs), in an eight-rounder, in Delray Beach, Florida.

“I was actually looking forward to watch Callum Johnson and Joe Smith fight. Their style matchups would have made for a great fight; you know?” he stated. “I was sitting in the sauna and my coach Kevin Cunningham called me and said, ‘Man, you’re never going to believe this. They just called for you to fight Joe Smith Jr. for the title.’ I was like, ‘Wow. This is insane.’

“It’s crazy that’s how boxing works. One call like that [can change your life]. This was an opportunity I couldn’t pass up.”

However there is an irrefragable difference between a legitimate world titleholder and a journeyman. Geffrard is aware of this but he asserted that his previous experience working with unbeaten unified 175-pound beltholder Artur Beterbiev, long-reigning former titlist Sergey Kovalev and Eleider Alvarez have prepared him for this moment.

“Sparring Artur was a great learning experience. That guy…he’s a beast. He has devastating power. I worked with Eleider Alvarez, the Colombian who was stopped by Joe Smith. I also helped Kovalev with several camps. I thought he hit hard.

“But Beterbiev…that guy he has a whole different type of power. And he keeps this poker face on the whole time. He cuts the ring off — he’s a beast.”

The 32-year-old Smith (27-3, 21 KOs), ranked No. 3 at 175 pounds by The Ring, who won the vacant title last April with a majority decision win over Maxim Vlasov, was praised by his upset-minded opponent.

“Smith is just a really tough guy. Short notice or not, he’s a tough opponent for anybody. He just keeps coming forward. He is well-conditioned and has good power. I’m mentally prepared and focused for a tough guy.”

The Smith fight will serve as just his second bout in nearly four years. Following a fourth-round stoppage of Zoltan Sera in April 2018, Geffrard was nowhere to be found in 2019 or 2020, other than the gym.

“I suffered an injury right after [the Sera fight]. Then it was just hard for me to get fights,” Geffrard revealed. “I had no promoter; my manager passed away, just typical boxing business stuff. When I started training with Kevin Cunningham, we got good things rolling again.”

Geffrard told The Ring he was unable to reveal how much he will earn to face Smith but also stated that money was not his main motivation for accepting the fight.

“Finances are great but what’s more important to me is being able to fight for a world title,” he continued. “I know many fighters that have trained their whole lives for an opportunity like this and they never were able to fulfill it.

“For me to even get that call is just insane. I won’t let this opportunity go to waste.”