From the archive: The artistry of Pernell Whitaker 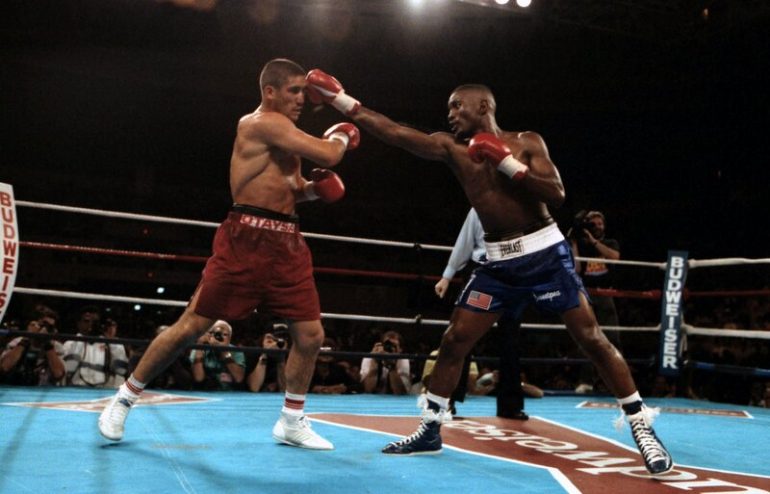 Editor’s Note: This feature originally appeared in the December 1991 issue of The Ring. It is being presented verbatim.

It mattered not that Pernell Whitaker had just retained the world lightweight title by earning a unanimous decision over Poli Diaz. No one seemed to have noticed that that Whitaker had adjusted against a difficult, ridiculously awkward opponent and won with ease. Did anyone care that by retaining the title for a fifth time, he had remained one of only two undisputed champions in boxing?

The Diaz fight had ended less than an hour before, and already it had been forgotten. All the media wanted to know was if “Sweet Pea” was going to step up to 140 pounds and fight unbeaten WBC champion Julio Cesar Chavez, or remain at 135 and take on three-division champion Jeff Fenech.

Whitaker smiled and shook his head. He had heard the questions all week long, and it seemed to him as if the reporters were implying that unless he eventually faced the mighty Mexican or the aggressive Australian, he wouldn’t be regarded as a fighter who had accomplished all that he could.

“I’m proud of what I’ve done in boxing,” Whitaker said. “I’ve beaten whoever has been put in front of me, so it’s not like I feel I have to fight Chavez or Fenech to justify my position.”

But maybe he does have to.

Clearly the master of his division, Whitaker has established himself as the best lightweight since Roberto Duran. With fast hands, quick feet, a straight left, a first rate jab, and a good body attack, the 28-year-old southpaw has unified the title and compiled a record of 26-1 (13). 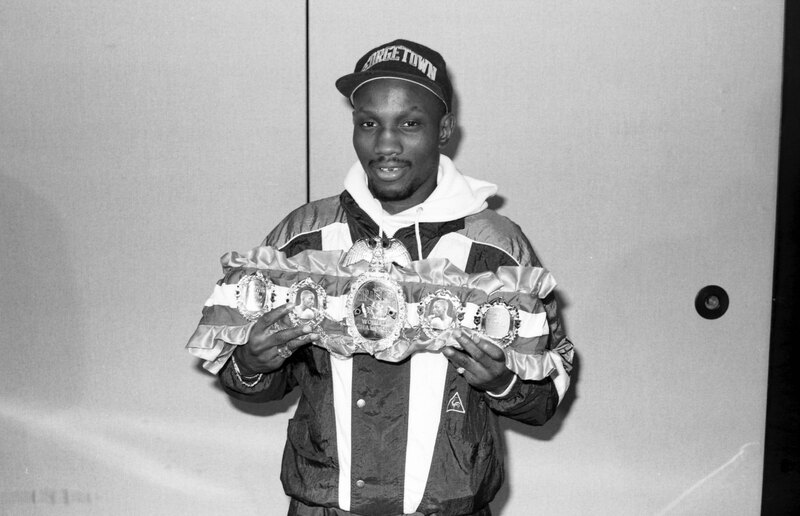 Whitaker is rated second in The Ring’s pound for pound ratings, but a question still looms: Can a highly stylized wizard achieve greatness without engaging in at least one classic and bruising confrontation?

Greatness, of course, means different things to different people. Some see devastating knockout power as a potential sign. Others look for a champion who demonstrates skillful defense. Yet others ask that a fighter, whatever his methods, dominate his era. Boxing history, however, reminds us that without at least one telling – and demanding – fight, a champion will likely find greatness elusive.

In each case, the greatness of these champions wasn’t acknowledged until they proved themselves against tough opponents in classic battles. Though Taylor lost to Chavez, he’s proud that their give-and-take bout was considered one for the ages. And he, like many others, wonders if his stablemate has the need – or desire – to engage in such a fight.

“It would be great if he would beat big-name fighters because it would give him a bigger name,” he said. “But he won’t take more punishment than he has to just to make the fight more intriguing. His style is to score, and not get hurt.”

Whitaker sees no need to wage all-out war just to prove how good he is. He believes that when fight historians review his career, his accomplishments will adequately serve him.

“Look, I’m a 12-round fighter,” he told The Ring. “I get a kick out of going the distance. I like to dodge my opponents. And while I’m no banger, I’m good at what I do. I like to throw a combination or two, then get out. Now you see me, now you don’t. That’s my style. And it’s how I try to take an opponent’s strength from him before he can use it against me. That’s why I consider myself a ring general.”

In that regard, Whitaker shares a philosophy with another great general, Douglas MacArthur.

In American Caesar, author William Manchester writes that MacArthur’s “strategic grasp, tactical skill, and operative mobility were responsible for him losing fewer lives in four years of fighting in the Pacific theatre during World War II that Gen. Dwight Eisenhower lost in the Battle of the Bulge. MacArthur, who knew how to effectively drain an enemy’s strength, did so at little cost to his troops. Like Whitaker, you can’t link MacArthur’s military genius to any one great battle because he didn’t believe in knockdown, drag-out fights.

To many, however, such ring battles reveal a man’s mettle. Though Ali lost to Frazier in March 1971, he won admirers by fighting through semiconscious in round 11, and scrambling to his feet after a 15th-round knockdown. Until then, Ali had been regarded as a slick, quick heavyweight with unique style. That night he added guts to his reputation. Fight fans are still waiting to see how Whitaker will react if one of his fights becomes a war.

“I think there’s something to be said for outstanding defense, though,” said Whitaker. “After all, boxing is supposed to be the art of hitting and not being hit. That’s something which people have forgotten. But I haven’t. I’m not at all interested in getting slugged by the other guy.” 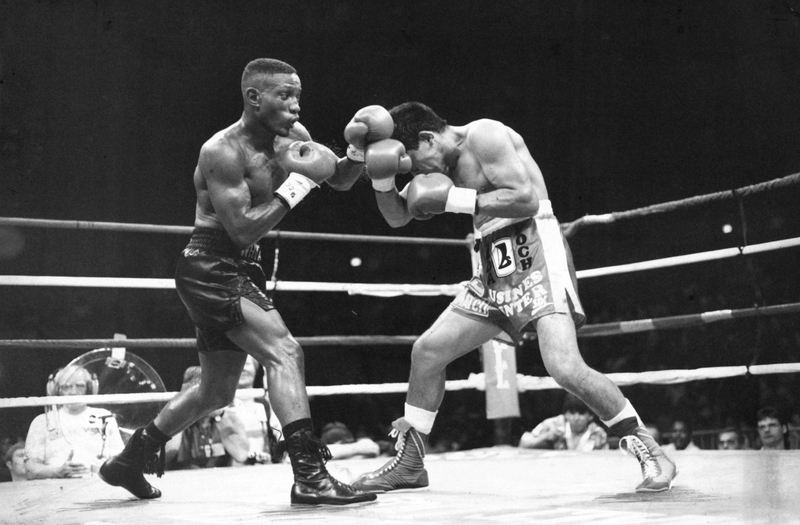 Whitaker was brilliant against Jose Luis Ramirez in their rematch. Photo by The Ring Magazine/ Getty Images

That Whitaker is one of the best artists on canvas today, there is no doubt. Just ask Azumah Nelson, Louie Lomeli or Jose Luis Ramirez. Each pursued Whitaker, but failed to get close enough to land effectively.

And yet, as good as Whitaker is, he’s often viewed as boring. There’s no sense of mystery or intrigue to his fights. Ringsiders not only know that he’s going to win, but how he’s going to win. Should that be held against him? Of course not. But it might be, because in order to attain greatness, a fighter must move millions. And the masses are seldom stirred unless given a moment to savor.

Such a moment can occur when a master boxer turns slugger, as Leonard proved in his first fight with Hearns.

According to Whitaker, though, the boxing public will never see him take such an approach.

“I’m just not ferocious,” he said. “And I don’t equate ferocity with greatness. I’m slick and classy and graceful, and I think in time people with recognize my artistry in the ring and give me my due.”

But for Whitaker to be considered an all-time great, and not just the best lightweight of his day, he must at least upgrade his level of opposition. Today’s 135-pound top 10 is woefully thin. As a result, it hasn’t been enough for Whitaker to compile an outstanding record and unify the title. Think about it: Ali had Liston, Frazier and Foreman. Leonard had Hearns, Duran and Hagler. Duran had DeJesus, Buchanan and Leonard. Hagler had Hearns. And Chavez had Taylor. Such opposition brought out the best in these champions, and revealed not only their skill, but their courage as well.

But who has tested Whitaker? No one. He’s breezed past all of his challengers. Which is why he needs someone to give him trouble, as least for a round or two, and force him to dig down and perhaps discover an aspect of his game that even he never knew existed.

That someone could be Fenech. There’s talk that if the Australian beats Nelson in their 130-pound rematch, he may rise and challenge Whitaker in an effort to win his fifth world title. No doubt that such a matchup would be intriguing, with the forward-marching Fenech pursuing the ever-evasive Whitaker.

“I think it would be very interesting,” Whitaker said. “But don’t expect me to give Fenech the kind of fight Nelson gave him. No way I’m standing there and trading punches with him. I don’t like fights like that. Sure his fight with Azumah was a classic, but that kind of brawling I want no part of. I think a great fighter is someone who makes fights look easy. If I can outslick a guy, isn’t that just as good as withstanding his punches and winning? You shouldn’t have to fight these all-out wars. That take too much out of you. That’s why I think artistry ought to count for something.”

Certainly Whitaker’s artistry counts for something today. But what will it count for 50 years from now? Whitaker will surely by recalled as having been a skillful fighter during his time, but without big-name victims on his record, the description “all-time great” may not apply.

Names like Anthony Jones, Juan Nazario and Poli Diaz hardly create excitement. Perhaps if Whitaker had come along a few years earlier, when the division was stronger and included marquee names like Edwin Rosario, Hector Camacho, Livingstone Bramble and Ray Mancini, Sweat Pea would already be considered an all-time great. Perhaps fans would be revering him for his grace, style, speed and defense.

Whitaker still has a chance to join the legends. Ideally, he’ll stay at 135 pounds at least until the winter. He’s scheduled to defend against former featherweight champion Jorge Paez in October. After the Paez fight, he should push his promoter, Dan Duva, into getting him a defense against Fenech. Should he beat him, and then move up and dethrone Chavez, no one will question his tactics.

And for the first time, boxing fans everywhere will have to accept the ring artist on his terms, not theirs.