From the Archive: Floyd Patterson gets off the floor to halt Pete Rademacher 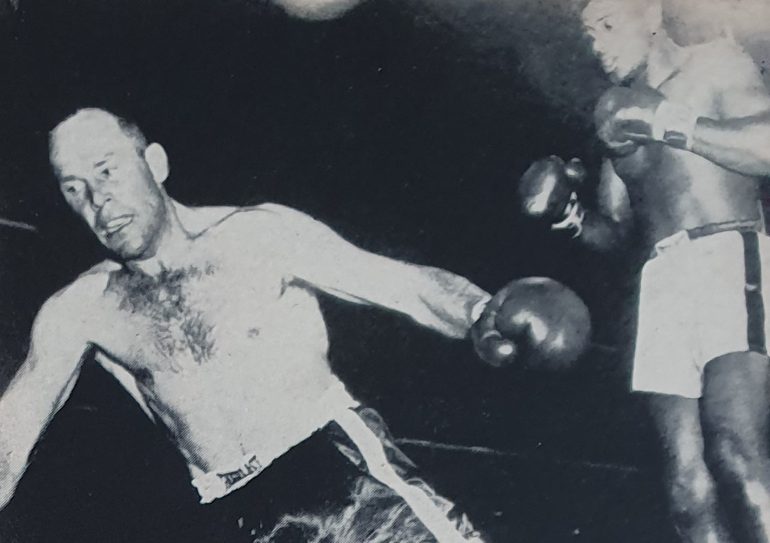 Photo from The Ring
04
Jan
by The Ring

Editor’s Note: The following feature originally appeared in the November 1957 issue of The Ring. It is being presented verbatim.

Peter Rademacher, from the Yakima Valley in the State of Washington, Olympic heavyweight champion, had a dream. He became obsessed with the strange notion that he, an amateur, could win the world title from Floyd Patterson.

Rademacher no longer has that dream. He became disillusioned in a fight in which he somehow lasted through 2 minutes 57 seconds of the sixth round. He was trounced, whipped, beaten, belted, and knocked out. But let it be said with emphasis, he wasn’t outgamed.

After the fight, Rademacher got an offer of $20,000 from the IBC (International Boxing Club) to come to New York for a fight.

Despite his having gone 17 minutes 57 seconds with Patterson, despite his having floored the champion of the world for a count of two, Rademacher has utterly no future as a professional boxer. He knows it. It is my firm conviction that he should hold tight to his laurels and forget about answering the bell again.

Rademacher is vice president of “Youth Unlimited,” a Columbus, Ga., organization fighting juvenile delinquency. There lies his destiny and his future.

Pete’s Georgia backers dropped about $120,000 on their fantastic project, which was doomed to failure from the outset. Let’s not have another such extravaganza.

As for Patterson, in his second defense of the title, he had best forget that he ever faced the Olympian. Floyd was a big disappointment. Analysis of the degree of disappointment is unnecessary. It is too deadly obvious.

Before Rademacher lies a career out of the ring. Before Patterson lies a June fight with Zora Folley, and according to his manager, Cus D’Amato, a possible fight in February in Texas with Roy Harris, both under the promotion of Emil Lence. 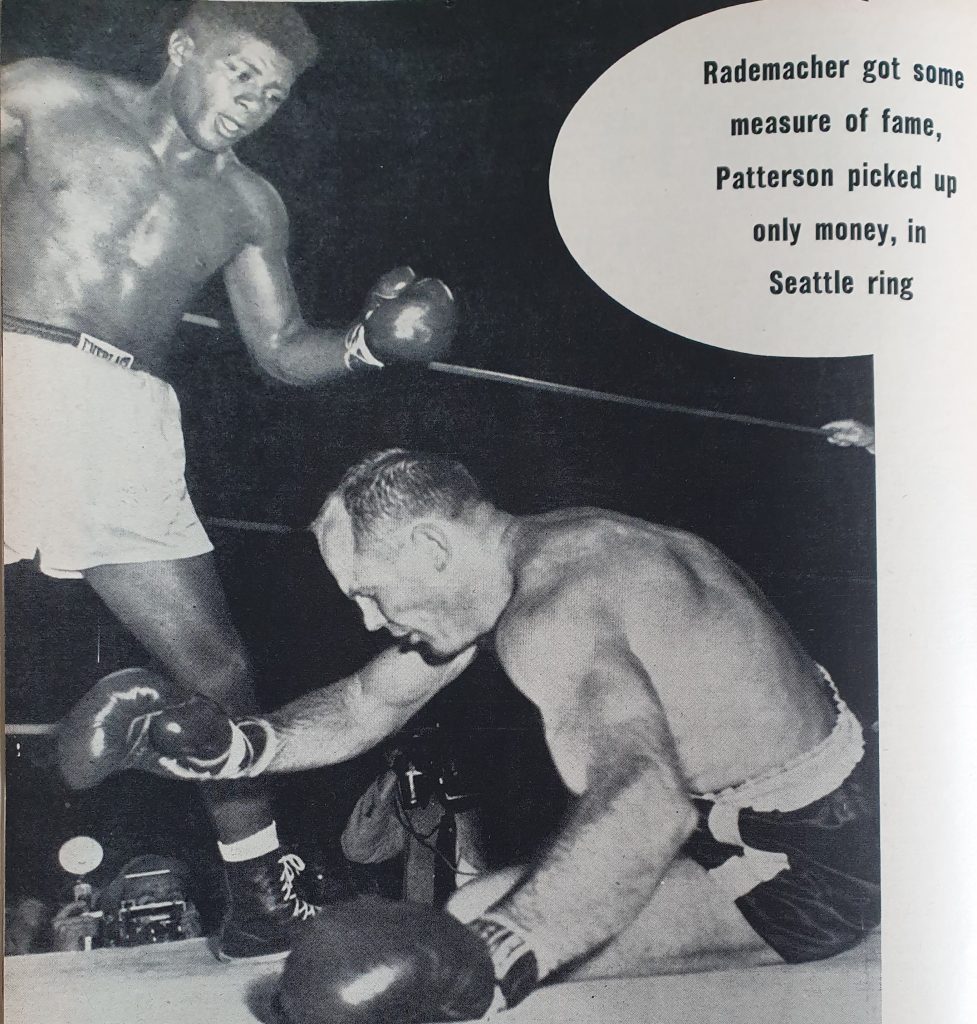 Photo from The Ring

Self-confidence and courage are wonderful assets in boxing but are insufficient when one faces an opponent who, in addition to these qualities, possesses cleverness, punching power and ring savvy.

Rademacher learned that the hard way when the audacious amateur attempted to wrest the crown from Patterson. The former U.S. Army lieutenant now knows that courage, conviction and self-confidence can carry one just so far and no farther. His knockout defeat in the sixth round taught him respect for the difference between an inspired amateur and a professional who had reached the heights.

Five rounds and two minutes and fifty-seven seconds were consumed in Peter’s futile and fantastic bid for world heavyweight honors.

“I want to get the feel of it just once,” said Peter in The Ring offices a few days before Youth Unlimited, a Columbus, Georgia boys organization, arranged the Seattle affair, “and it must be in a championship fight.”

Peter couldn’t be persuaded that it isn’t done that way. He got his wish, but more that he had bargained for.

He didn’t cave in from fright nor succumb to the first solid clout he received, as had been expected. In fact, he took the play away from the champion in the opening rounds, during which it appeared a grave error had been made and an injustice done to him by calling him an audacious, brazen amateur, unfit to oppose the King of the division.

Before a gathering of 19,961, far short of the 25,000 expected, but big enough to set a record gate for the Pacific Coast of $243,030, the amateur electrified all when, after winning the opening round by a slight margin, he crashed a club-like right to the side of Floyd’s temple to drop the champion for a two-count.

But his hopes, his dream of becoming the first amateur to win the world crown in his professional debut, soon were shattered. They went up in smoke as the defending champion with thudding blows, piled up seven knockdowns to end the fantastic.

The impetuous, audacious challenger got the feel he longed for – and what a feel it was! An unforgettable one!

That the bout lasted as long as it did, was due to referee Tommy Loughran’s insistence that it must end in a knockout. His wish, like that of the amateur king, was granted when he told off hesitatingly, as in all of his knockdown counts, the doleful ten following a powerful right to the jaw.

Tommy saw Peter helpless on the canvas, on his knees, one hand on the floor, the other at his side and head hanging low, as the fight ended with Rademacher’s chief second yelling from his corner to Loughran: “That’s enough! That’s enough!”

ONE BIG THRILL OF FIGHT CAME IN SECOND ROUND

In the thrilling second round, the fans, mostly Peter’s supporters, let loose frenzied shouts as the 50 to 1 shot, the longest in ring heavyweight history, decked Patterson. But at no time thereafter did anyone but Rademacher’s staunch supporters think that the rippling muscled champion would lose his throne. Big Pete, with height, weight and reach well in his favor, was hence forth destined to become the sitting duck for his more experienced foe. Pete’s audacious assault in the second round won for him the high accolade in every story sent from the ballpark.

Despite the unmerciful shellacking he took in the three rounds following the knockdown, Rademacher kept rising unsteadily on his quivering legs six times to assimilate more punishment. Then came the final fall and his Cinderella dream, his flight to the moon, ended with the kayo.

But for all our pre-fight scoffing, our pleas to prevent what at all times appeared a fantastic, ill-advised promotion that might end in a fatality, the challenger could hold his head up high, firm in the knowledge that as a bold, courageous amateur, he dominated for two rounds and almost finished the sixth frame. Pete accomplished the unbelievable in the first and second rounds.

As I sat with him and his charming wife at the breakfast table the following morning, Pete remarked:

“Well, Nat, you had your say and perhaps you were right. But as the one who conceived the idea and speaking as my own manager, I can say that I enjoyed the idea from its infancy, through its complete promotion and even to its termination. I have no regrets. There’s nothing like starting from the top and working one’s way down, should I continue to box,” he laughed. 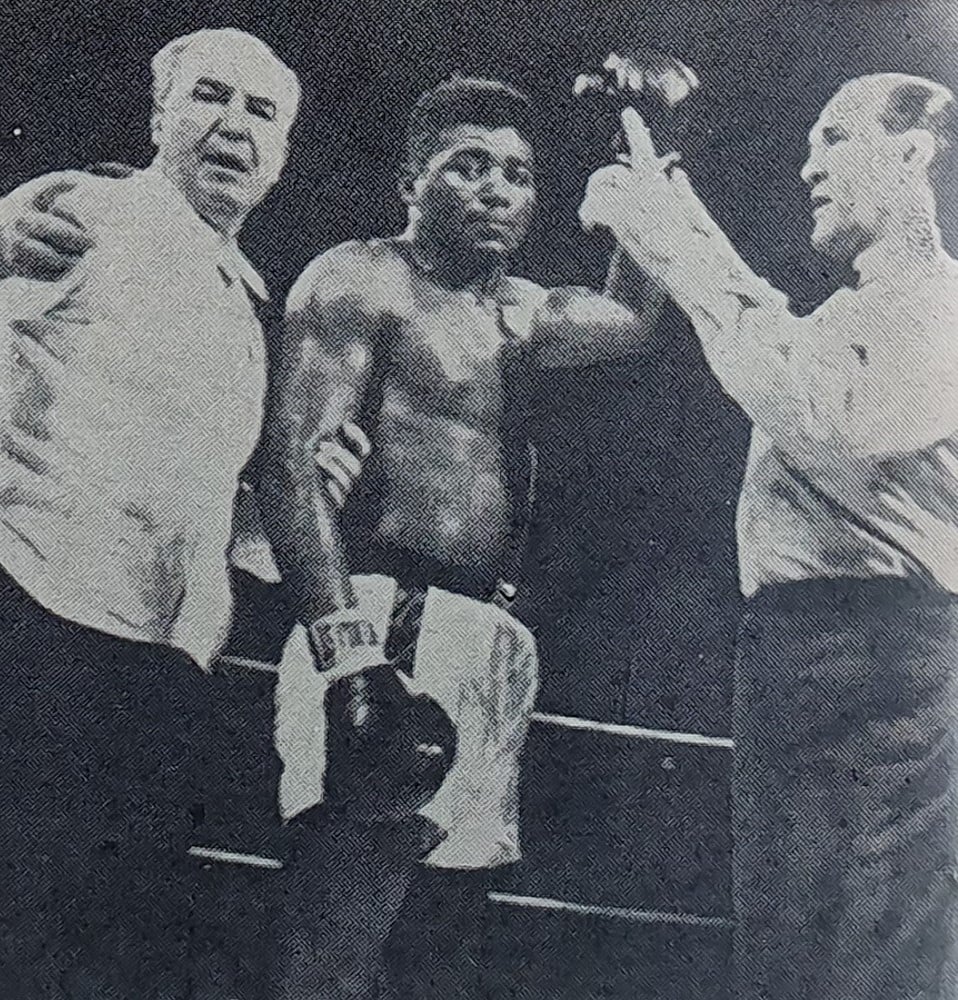 Photo from The Ring

LOUGHRAN’S LACK OF EXPERIENCE WAS NO HELP

Three times before the knockout, Loughran’s hesitancy in continuing to count from ‘9’ was reached, saved Rademacher from an earlier kayo. Tommy also was uncertain about Rademacher’s knockdown of Floyd, which he called a slip until corrected by ringside reporters and Patterson, who told the referee he definitely had been knocked down.

It wasn’t a great fight.

But the affair had its exciting moments and it served its purpose. It proved beyond doubt what had been preached so often, that an amateur, though prince of his class, is not a suitable opponent for the king of the professional division. It taught Peter that there is a vast expanse between the amateur and the professional.

The tide turned for him in the middle of the third round when Peter was dropped for the first time with a straight right to the jaw.

From that round to the end, it was a pitiful attempt of the big, brawny, audacious challenger to make good his boast that not only was he fit for such a contest, but that he was Patterson’s master. In the end, exhaustion as much as the walloping he took, put the finish to his wild dream.

Two right hooks made his knees buckle as the third round got under way. As Patterson walked away nonchalantly, one could here ringside comments, “he’s carrying Pete for the pictures.”

But that wasn’t so. Floyd swung about when Rademacher came in close and crashed a right – his favorite punch in the fight – to Pete’s head for his first down.

The rash, impetuous challenger who walked off a Yakima Valley farm owned by his dad, to face adventure rivalling the story book tales of Frank Merriwell, undaunted by the unanimity of expert opinion that he was unsuitable opponent for Floyd, didn’t know what struck him as he landed on the floor.

Peter rallied for a few seconds in the fourth. He landed one good right to the side of Floyd’s head, but Patterson quickly recovered from the shock and was in full command again. Patterson took the round but not by as big a margin as the others.

Next came his greatest performance – the knockdown of Rademacher four times in the fifth round. Whatever doubts Peter’s friends had about Floyd’s superiority, were now definitely shattered.  Patterson was lashing out like a cobra against the fast fading amateur. He belted him for counts of 5, 7 and, twice, for 9.

Three times Rademacher rose unsteadily but Tommy waved both men into action and the fourth knockdown followed. The bell saved Pete from further punishment, but only until the next session got under way.

That started slowly with Patterson giving Loughran an appealing look as he walked out to finish the job. He seemed to show pity for the man who thought he’d relieve the champ of his crown.

They sparred, then out flashed Floyd’s right and the weary Rademacher hit the boards with a thud. He was so exhausted one couldn’t conceive how he could take any more but he got up and was downed again and this time was counted out.