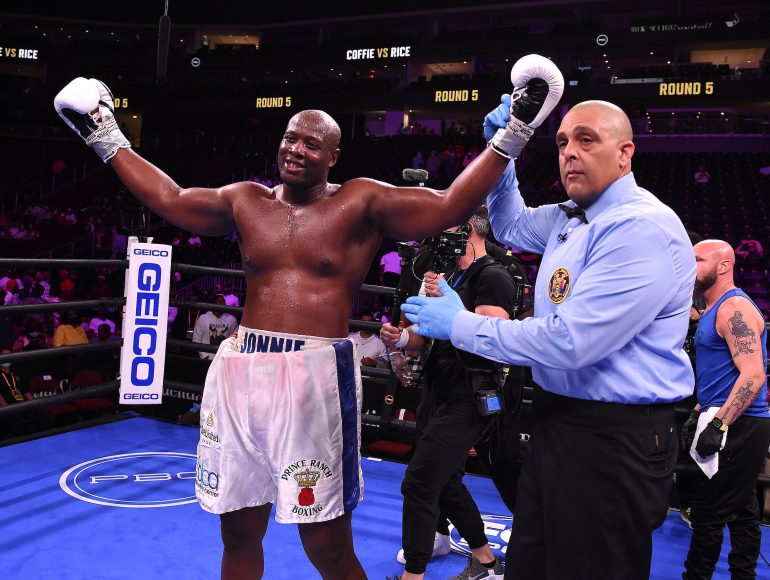 Jonathan Rice proved to once again have Michael Coffie’s number, dominating the New York based upstart on Saturday to a unanimous decision win at the Seminole Hard Rock Hotel and Casino in Hollywood, Fla.

Prior to the bout, Rice said that if it wasn’t broken, there wasn’t any need to fix anything. That statement proved true as Rice once again exploited Coffie’s inability to avoid straight right hands. Coffie was wobbled in round 4 by one of those punches, but Rice’s inability to sustain his offense prevented him from finishing his opponent like he did in their first fight, when Coffie was stopped in five rounds.

.@4everjonnierice finds an opening and lands a 1-2 that rocks Michael Coffie in RD4. #RiceCoffie2

Rice finds himself with back to back notable victories after he was a late replacement for Gerald Washington, who had been the original opponent for Coffie for a fight in July of 2021 before withdrawing due to testing positive for COVID-19.

Demirezen, a 2016 Olympian, was behind on the scorecards when his onslaught compelled Washington’s trainer James “Buddy” McGirt to halt the bout at the :27 mark.

Demirezen has now won four straight since his lone pro defeat, a unanimous decision loss to Efe Ajagba in July of 2019. Washington, 39, the California native who had previously challenged Deontay Wilder for the WBC heavyweight title in 2017, has now been stopped in three of his last four fights.

Opening up the pay-per-view portion of the card, Viktor Vykhryst (9-0, 7 KOs) and Iago Kiladze (27-6-1, 19 KOs) combined for 5 knockdowns, with Kiladze going down twice in the first and once in the second, and Vykhryst going down once in each round. In the end, it was Vykhryst who emerged victorious, with the fight being stopped at the 1:44 point.