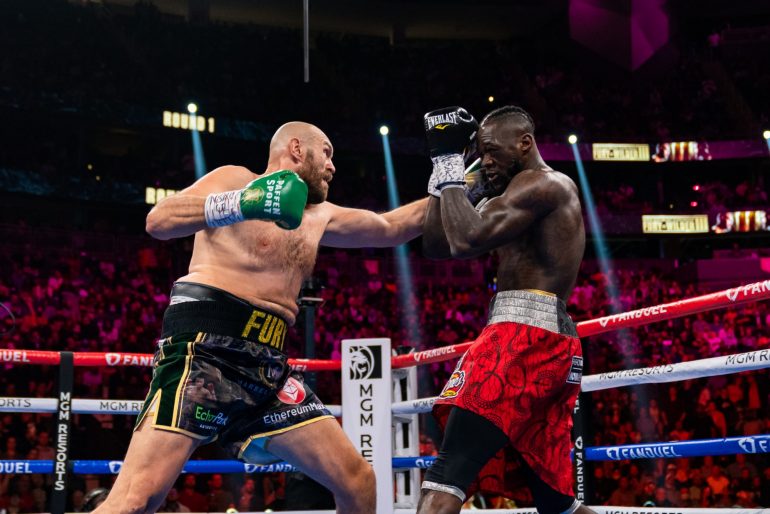 “I’m running out of things to win,” laughed a jubilant Tyson Fury when informed that he’d picked up two awards for 2021: Fight of the Year and Round of the Year.

“I’m absolutely ecstatic and overwhelmed to be recognized by Ring Magazine yet again. That’s more awards to add to the collection and more plaques to put on the wall. I’m absolutely delighted, and I’d like to give a big shout out to Deontay Wilder, because I needed a dance partner in order to win this award.”

Fury-Wilder 3 is Fight of the Year? Who would have thought it?

The bout was almost two years in the making, but by the time the fighters entered the ring at the T-Mobile Arena in Las Vegas on October 9, many fans and experts felt that this trilogy match was just getting in the way.

The vast majority of the boxing world had their collective fingers and toes crossed for the long-awaited all-British collision between Fury and Anthony Joshua, which would finally consolidate all the pieces of the heavyweight puzzle. It was just a matter of time. Saudi Arabia would be the locale. August 14 would be the date. Boxing would have its first undisputed heavyweight champion since Lennox Lewis claimed that distinction by defeating Evander Holyfield in November 1999.

But nothing is ever guaranteed in this sport.

One very large banana peel, delivered with the speed and suddenness of a Wilder right-hand knockout shot, floored all concerned. A court arbitrator ruled that “The Bronze Bomber” was legally entitled to a third fight with “The Gypsy King” and Team Fury had no option but to get it made. Yes, in the strike of a judge’s gavel, the multimillion dollar Fury-Joshua matchup that appeared destined for the Middle East was transformed into a pile of tumbleweeds in the Arabian Desert.

And the drama didn’t stop there.

Fury tested positive for COVID-19 – which sank the original July 24 date for Fury-Wilder 3 – and the bout was pushed back two-and-a-half months. All this waiting around so that Fury could prove (again) that he was a better fighter than Wilder. The Englishman had come out on the wrong end of a split decision draw in December 2018 and smashed Wilder to pieces en route to a seventh-round stoppage in February 2020. Wasn’t that enough? The heavyweight division was in a state of disarray, and there was yet another direct hit for those who remained hopeful of a Fury-Joshua clash when Oleksandr Usyk wrenched the IBF, WBA and WBO titles from “AJ” in September. However, the unbeaten Usyk had performed brilliantly to claim a 12-round unanimous decision and his arrival among the heavyweight elite was a welcome one. Could Fury and Wilder give the glamour division another shot in the arm in their third encounter? 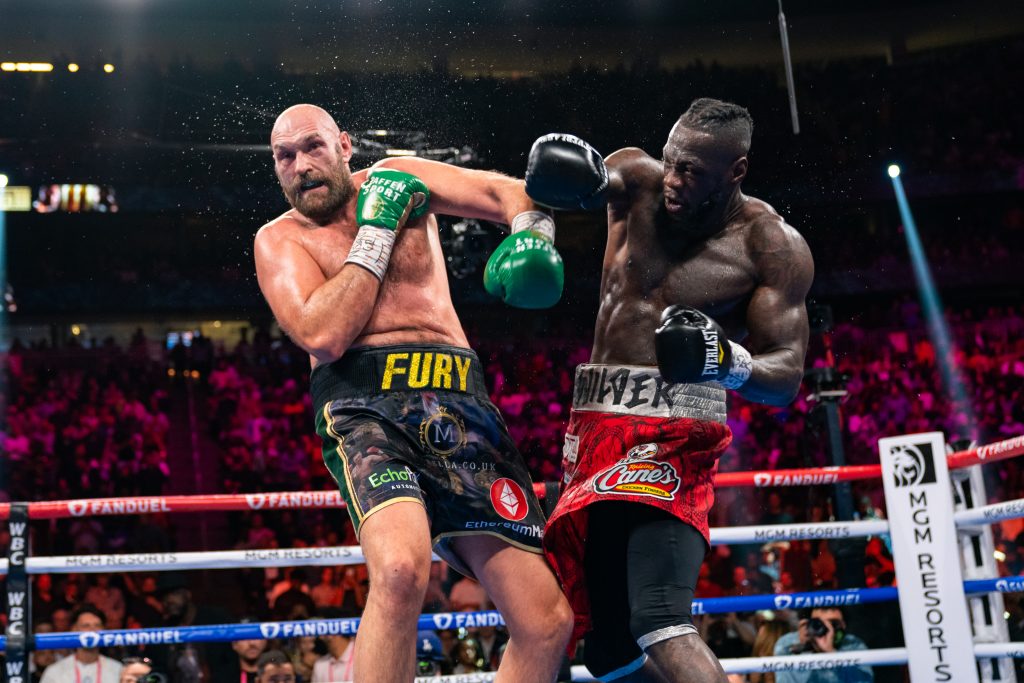 Classic heavyweight championship trilogies are sacred among fight fans and historians. Jersey Joe Walcott and Ezzard Charles duked it out four times, but their third encounter (won by Walcott KO 7) includes one of the most devastating knockouts in the division’s rich history, and the bout was also voted Fight of the Year for 1951. The criminally overlooked Floyd Patterson and right-hand power puncher Ingemar Johannson shared three short and explosive meetings in as many years, and part two (won by Patterson KO 5) took the Fight of the Year award in 1960. Muhammad Ali and Joe Frazier reign supreme with regard to heavyweight trilogies, having produced arguably the greatest rivalry in all of sports. “The Fight of the Century” and “The Thrilla in Manila,” parts one and three, scooped Fight of the Year honors for 1971 and 1975 respectively. And while Evander Holyfield and Riddick Bowe were on far friendlier terms than Ali and Frazier, that didn’t stop them from pulverizing each other in their epic three-fight series, with the first encounter (won by Bowe UD 12) being named Fight of the Year for 1992.

Fury-Wilder 3 borrowed heavily from all of the above. As with Patterson-Johannson 3, both men were on the floor. Just like Holyfield-Bowe 1, Wilder, the smaller man, struggled to overcome the size and skill of a much larger opponent but covered himself in glory trying. As with Frazier in his hellacious war with Ali in Manila, Wilder was willing to put his life on the line even when victory appeared to be impossible. And like Charles-Walcott 3, we had a clean and decisive knockout finish.

“It was a great fight, but not so great for me and Deontay, because fights like that knock years off your life,” said Fury, who retained the Ring and WBC titles. “But it was an epic battle and a great trilogy. It was definitely all worth it. There was a lot of talk that it was one of the best heavyweight fights in recent years, and it was a great thing to be a part of.”

After a slow start, Fury took command in Round 3 when he hurt Wilder badly with a right to the ear before flooring him with a sharp right uppercut and a left hook. The stricken ex-champ rose and shook his head dismissively, but the writing was on the wall – or so we thought.

As Fury found out in their first encounter, when Wilder lands flush with a right hand, the damage can be measured on a Richter scale. Well, it was history revisited in the third chapter when Wilder walked Fury into a sonic-boom right hand in the fourth round. The punch sent a visible shockwave through Fury’s torso and deposited him on the canvas. He got up – of course he did – but this time Wilder put him down again in a dramatic session that’s been awarded Round of the Year honors for 2021.

“It was a tough old three minutes,” admitted Fury with more than a touch of understatement. “When you’re sparring in the gym, you’re not getting dropped like that, then – bang – all of a sudden you’re in a fight where there’s three knockdowns in two rounds. It was crazy! That’s the first time I’ve been dropped twice in one round. Everybody thought it was over, but not me. I always knew I was going to get up and win the fight.”

Fury-Wilder 3 needed that round in order to become a classic. It was as vital as the shower scene in Psycho and every bit as terrifying if you were a Fury fan. Even though Wilder only enjoyed sporadic success from the fifth round until the devastating conclusion, it was the omnipresent threat of his brutal right-hand punching that kept fans on the edge of their seats. 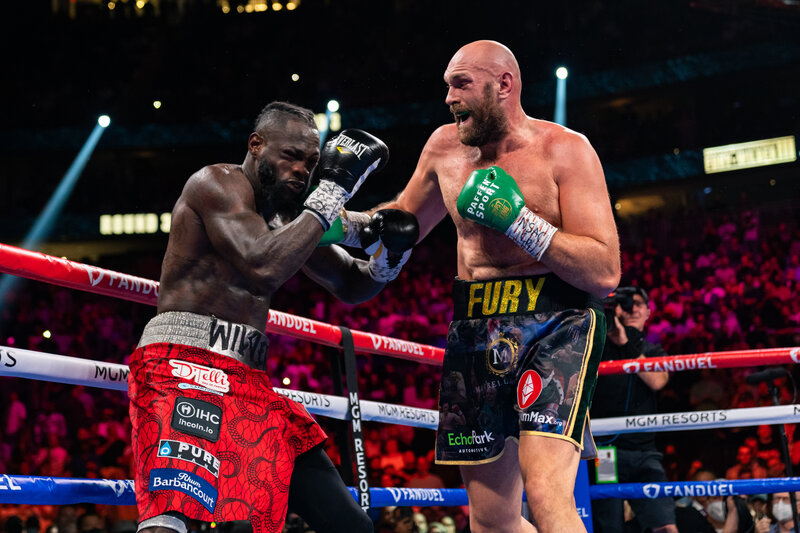 Despite the danger, Fury began to close the book in Round 10. After ducking under a left hook, he thumped Wilder with a heavy right to the head that dropped the Alabama star on all fours. Wilder rose gamely, but he was hurt – badly hurt – and absolutely exhausted. But even then, when he had next to no fuel left in the tank, Wilder let his hands go at the end of the round and still looked lethal. It was an incredible effort under fire.

However, it all ended in the penultimate round. Fury landed power shot after power shot and punched the life out of his opponent. A right hand landed with sickening force when Wilder was against the ropes, and a right uppercut raised the American’s chin. Fury missed a follow-up left hook, but a massive right hand was the finishing blow.

Even then, Wilder, less than half conscious, still tried to get up.

Given this latest defeat and with the success he’s already enjoyed (10 defenses of the WBC title over five years), Wilder has suggested that we may have seen the last of him in a boxing ring. After all, he’s 36 years old and a multimillionaire with a beautiful family. However, there’s no doubt that Wilder could still be a major force, and his former rival would like to see him make a return.

“I’d like to see him fight on, because he has a lot to give to the sport,” said Fury graciously. “I still think he’s the second-best heavyweight out there, and I still think he knocks everybody out except me – 100 percent.”

The Fury-Wilder trilogy has concluded, and both men saved the best for last.