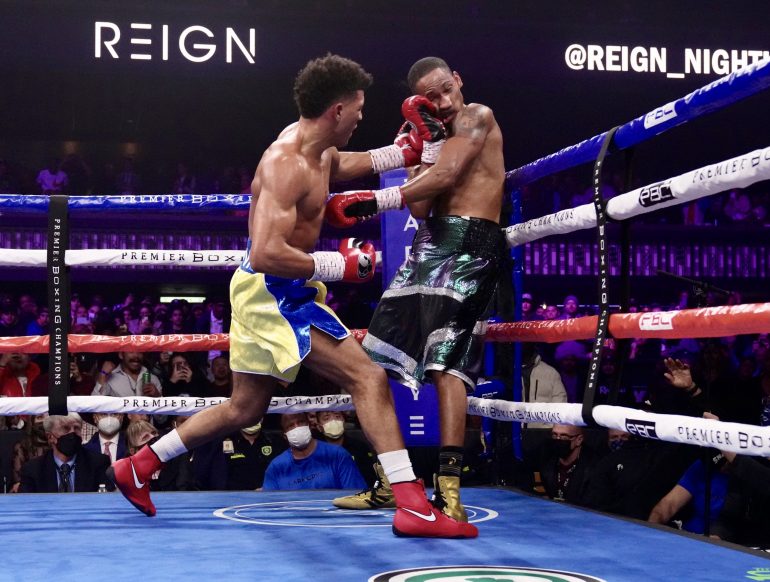 The only thing separating David Morrell Jr. and boxing stardom is time. The 23-year-old southpaw super middleweight has a personality. The Cuban has devastating power, and he has a home base at The Armory, in Minneapolis, Minnesota.

On Saturday at The Armory, Morrell headlined a PBC on FOX telecast against Alantez Fox and won handily, stopping the more experienced pro at 2:06 of the fourth round. [Editor’s note: Morrell, who is not yet rated by The Ring, made the second defense of the WBA’s secondary super middleweight title, which is not recognized by the publication.]

Morrell (6-0, 5 KOs), working with new trainer, the esteemed Ronnie Shields, dominated every facet of the fight.

“I was just listening to my team and following their instructions,” Morrell said. “We were just working in there, just like we do in the gym. They told me to let my hands go, so I did. Fox didn’t have the power to keep me off of him. So, I knew that I had to take advantage of it. I felt comfortable in there and that made it easy for me.

“I love fighting here in Minnesota. This is a great opportunity to fight in front of my fans here. It really motivates me.”

Though Fox (28-3-1, 13 KOs) was saved by the corner, which corner was in question. The FOX broadcast team said the towel came from Morrell’s side, not his.

“I thought I won the first round, and in the second round I knew he was going to come out aggressively,” Fox said. “So, I was trying to move and make it tough for him. We were holding each other on the inside and he came in with a good shot that dazed me. I was upset about the fight being stopped, but I know that my team has my best interests at heart.”

In the fourth round, Morrell busted Fox across the face with a short left to the jaw with around 2:00 left in the round. Fox fell forward as referee Mark Nelson reached a count of nine. 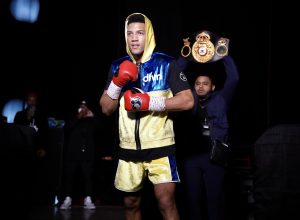 Fox got up on shaky feet, and within seconds, Morrell was all over him, when the towel was thrown in.

On the undercard, lightweight southpaw Jose Valenzuela (11-0, 7 KOs) was very impressive in dropping Austin Dulay (14-3, 10 KOs) three times in the first round, and once in the second, before referee Charlie Fitch brought Dulay over to the ringside doctor to end the scheduled 10-rounder at :02 of the fourth.

“The game plan was to use my jab, touch him to the body and then finish him up top,” Valenzuela said. “I just stayed patient, took the shots he gave me and landed a good one. I was surprised he fell right away, but he showed a lot of heart.

“I wasn’t surprised by the stoppage. I was going to stop him eventually and seriously hurt him. It was only a matter of time. I showed everyone that I’m a solid fighter and that I’m here to stay. I believe I’m the future of this game.”

Dulay, to his credit, wanted to keep going.

“I was surprised by the stoppage,” he said. “I was starting to pick it back up and tag him with some shots. I rocked him with an overhand left at the end of the last round. Then they didn’t even give me an opportunity to fight.”

The two began before the bell rang during their Friday weigh-in.

“My strategy was to box him and make it easy. I knew he was strong, but I hurt him in the fight,” Hitchins said. “I just wanted to make it an easy fight because I knew he was too slow to outbox me. I knew his new coaches were going to train him to walk me down.

“When we had the altercation yesterday, I did it on purpose. I knew that by making him mad, he was just going to try to come forward and take me out.

“I’m definitely coming for the strap. I had a lot of ring rust after my longest layoff in boxing ever. I just want to get back in the ring and stay active.”

“The strategy was always just to stay smart.” Puello said. “I knew that I just had to keep moving and execute my plan. As the fight went on, I could see that he wanted to fight toe-to-toe, so I adjusted and stood up to him.

“I’m ready for all the top 140 pounders. I’m just going to take it fight by fight, but they all know now that I’m ready for any of them.”

Owens couldn’t do anything.

“He was sharper than I expected, but he wasn’t too fast or too powerful. I just couldn’t get my timing going. He was the sharper fighter and he knew what he was doing. He was game and I take my hat off to him. It was all me. No excuses, he was the better man.”