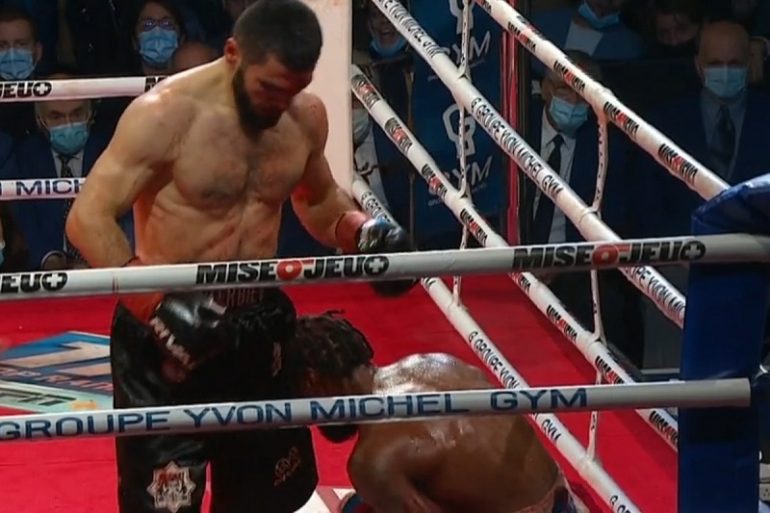 Artur Beterbiev broke down talented contender Marcus Browne, who remained in the light heavyweight rankings due to his game performance.
17
Dec
by Michael Montero

Artur Beterbiev fought through a nasty cut to stop game challenger Marcus Browne in Montreal on Friday night. It was the fifth defense of Beterbiev’s IBF light heavyweight title and the second defense of his unified IBF and WBC straps.

“I’m happy; it’s another experience in my career,” said Beterbiev after the fight. “You don’t know what can happen in boxing. I’m happy to win. Thank you to everyone who supports me.

“We’re ready for any fight next; we’re looking for the best. To be the best, you have to beat the best.”

Browne, a 2012 Olympian with plenty of experience and a tricky southpaw style, started well in the early rounds. He gave Beterbiev (17-0, 17 knockouts) plenty to think about but stayed on the back foot and mostly threw one punch at a time. Beterbiev, however, stalked forward and threw combinations from the opening bell.

He remains the only world champion with a 100% KO rate 🤯 pic.twitter.com/6mGHtrBAxg

A nasty clash of heads caused a cut for both fighters in the fourth round. For Beterbiev, it was right in the center of the forehead and for Browne (24-2, 16 KOs), it was above the right eye. The Russian seemed to get the worst of it, as blood streamed down his face for the remainder of the bout.

In the end, the cut wouldn’t stop the champion.

Browne was dropped from a flush right hand about halfway through the seventh round. It was a flash knockdown and he recovered well but Beterbiev was clearly in control of the fight by that point. The American tried to smash his head in his opponent’s cut every chance he could, a slick veteran tactic, but it was of little consequence.

It was target practice for the defending titleholder from the middle rounds on.

The ringside angle of @ABeterbiev’s destruction of Marcus Browne 😱 pic.twitter.com/XVZy6su4Bk

A right-left to the body dropped Browne again toward the beginning of the ninth round. This time, he took his time getting up and referee Michael Griffin reached the count of 10, giving Beterbiev the ninth-round KO win.

Beterbiev, currently ranked No. 1 by The Ring at 175 pounds, is a monster in the ring. Although his career has been plagued by inactivity, only fighting 17 times since turning professional in 2013, he’s stopped every opponent he’s faced. He currently holds two of the titles at light heavyweight, with fellow Russian Dmitry Bivol holding the WBA strap and American Joe Smith Jr holding the WBO belt.

Hopefully, in 2022, these men consolidate the titles to crown a lineal and Ring champion in one of boxing’s most storied divisions.

If and when those unification matches happen, Beterbiev will surely be the betting favorite. As for Browne, currently rated No. 5 by The Ring, he still poses a viable threat to any light heavyweight in the world.