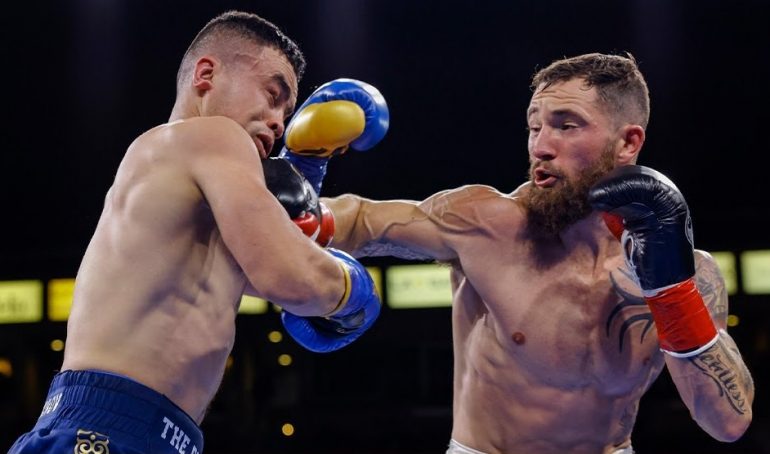 CARSON, CALIFORNIA – In a clash of unbeaten welterweights, Cody Crowley overcame a knockdown to win by unanimous decision over Kudratillo Abdukakhorov, of Uzbekistan, at Dignity Health Sports Park.

It was an impressive victory for Crowley, originally from Peterborough, Canada, and now residing in Las Vegas. He is a former sparring partner of Floyd Mayweather Jr.

Crowley came to fight in this clash of southpaw fighters. Both had their moments in the opening round but Crowley momentarily stunned Abdukakhorov midway during Round 2 with a barrage of punches. Toward the end of the round, a counter left hand from Abdukakhorov dropped Crowley to the canvas. Crowley was able to beat the count and make it out of the round.

The fight was mostly fought on the inside during its first half, in which both connected with combinations to the head and body. As the bout progressed, Crowley connected with more frequency, landing left hands behind a steady jab.

A cut opened along Abdukakhorov’s ear in Round 5, likely from a clash of heads. Blood streamed from the cut but it did not appear to affect him.

Seizing the moment, Crowley became the aggressor throughout most of the second half of the fight. Crowley walked Abdukakhorov down in an attempt to wear him down. Abdukakhorov side-stepped some of Crowley’s attack but took a hard left hand upstairs in Round 8.

Crowley gained more confidence during the last two rounds of the fight. An overhand left hand to Abdukakhorov’s head with about 30 seconds left in Round 9 connected, along with a handful of two-punch combinations during the final round.

Tonight was a solid performance for Crowley, who will likely earn more opportunities in 2022.

With the loss to Crowley, Abdukakhorov suffered a huge blow to his immediate future. Entering tonight’s bout, Abdukakhorov was ranked No. 7 at welterweight by The Ring and is the IBF mandatory challenger to face Errol Spence Jr., who also holds the WBC title.

Abdukakhorov, who is promoted by Sampson Lewkowicz, drops to 18-1, 10 KOs.