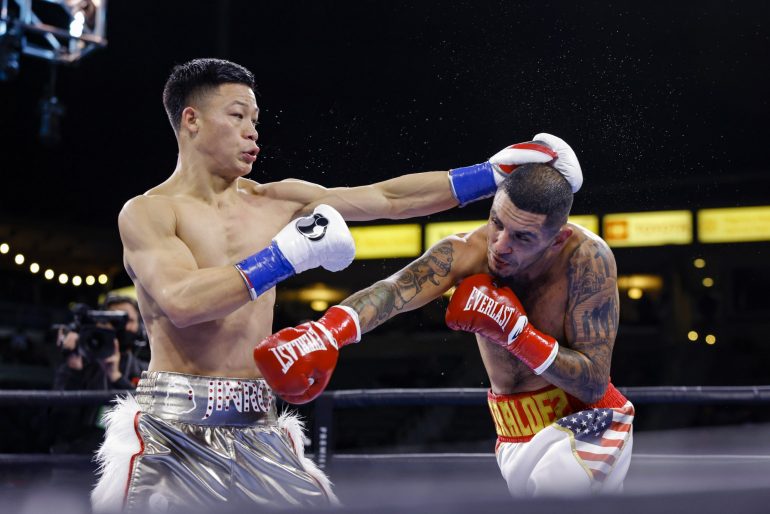 Tonight marked Lee’s first fight on a “Showtime Championship Boxing” telecast after appearing on a handful of “ShoBox” telecasts over the last several months.

Lee, a business administration major at California State University, San Bernardino, was the aggressor from the opening bell. The 22-year-old was able to momentarily stun Heraldez midway through the opening round with a two-punch combination to the head.

Heraldez, who had not fought since losing by stoppage to Regis Prograis on October 31 of last year, was able to stay in the pocket with Lee, at times connecting with a counter right hand upstairs.

The action slowed as the bout progressed, which seemed to favor Heraldez. Although he was only able to land one punch for every two Lee landed, Heraldez found success in spots during the middle rounds.

Lee continued to vary his offense, landing left-right combinations to the head. He began breaking Heraldez down in Round 6 but a thudding lead left hook found its mark to Heraldez’s head in Round 7. Moments later, Lee landed a left-right combination that dropped Heraldez to the canvas off the ropes. Heraldez remained on the canvas as referee Gerard White waved the fight off at 2:11.

It was a solid outing for Lee, who is promoted by Cameron Dunkin. Afterward Lee acknowledged not being able to land anything flush until the later rounds.

“I kept seeing that Juan was moving to his right and my right hand was coming up short,” said Lee, who has now stopped his last 15 opponents. “So I knew I had to jab and box him and make him forget about that right hand. Then I made the adjustment in the seventh round and got him out of there.

“I’m ready for anyone. It’s ultimately up to my team but I say bring them on.”