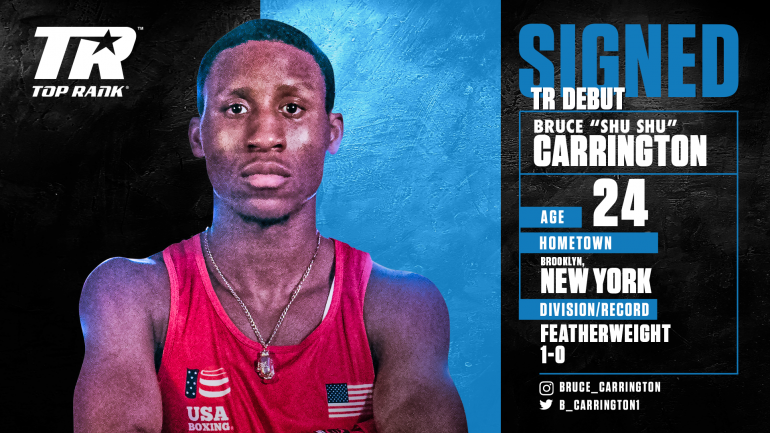 Carrington hails from Brownsville, Brooklyn, the same neighborhood that produced Mike Tyson, Zab Judah and Shannon Briggs. He will train with the noted Kay Koroma, who is known for working with the likes of Shakur Stevenson and Mikaela Mayer.

“I’ve always admired how Top Rank develops young fighters into champions,” said Carrington. “I see myself having a long career, and I am excited to perform on ESPN’s platforms. I’ve always had a pro style, and after the Olympic Trials, I knew I was ready to take the next step.”

Carrington missed out on an opportunity to qualify for Tokyo after the American qualifiers were canceled in 2020 and 2021. It was an unfortunate break for the 24-year-old, who began boxing in the Brooklyn gyms at the age of 7. He watched up close as fellow New York City fighters like Danny Jacobs, Luis Collazo, and Curtis Stevens turned into top professionals.

Carrington, whose nickname “Shu Shu” means “the one who rises above all” in Egyptian, finally rose to the top of the amateur heap. As the eighth seed at the Olympic Trials, he defeated the likes of Duke Ragan, the Top Rank signee who earned a silver medal in Tokyo.

“Bruce Carrington is one of the great American amateurs of his generation, and he has the makeup and skills to be a future world champion,” said Top Rank chairman Bob Arum. “He stood out on the Fury-Wilder III card as someone whose amateur success will translate to the pro ranks.”

A press release by Top Rank was used in this article