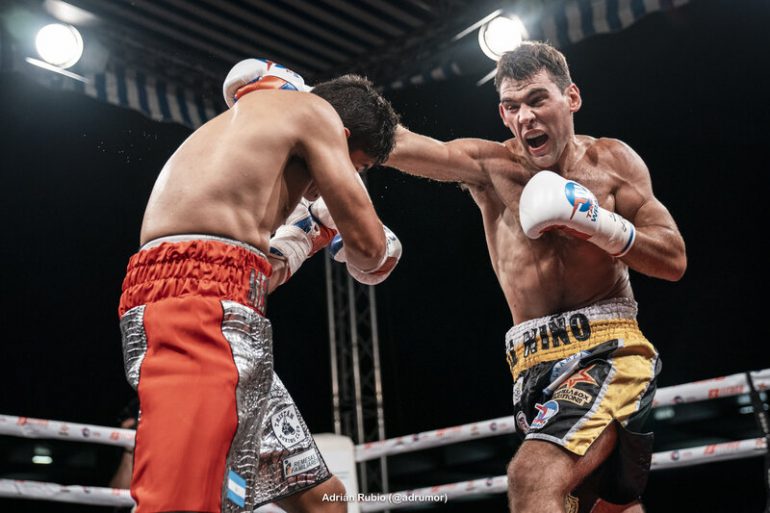 For the past year Sergio Garcia has had to wait patiently for his opportunity to face Sebastian Fundora in a WBC junior middleweight title eliminator.

That big chance finally arrives this Sunday when the pair collide on the undercard of the Gervonta Davis-Isaac Cruz showdown at the Staples Center in Los Angeles. The Showtime pay-per-view broadcast will begin at 8 p.m. ET/ 5 p.m. PT.

“I am very excited and I want to thank Sampson Boxing and PBC for this opportunity,” Garcia (33-0, 14 knockouts) told The Ring through Oscar Zardain. “After a long wait U.S. fans will be able to see me in a very important fight.”

The 29-year-old Spanish contender appreciates that this will be a difficult assignment.

“He has everything to be a tough opponent: tall, southpaw, hard punches,” said the former European titleholder. “But my trainer Victor Iglesias has a very well-designed fight plan and I am very confident of my victory.”

Garcia is well aware that he’s at a physical disadvantage against Fundora who stands 6-foot-5 and possesses an 80-inch reach.

“It was a difficult job for my team to find the right sparring partners,” he said. “I did a lot of sparring sessions with bigger fighters than me and also with a lot of southpaws. It was not easy but I feel ready for this challenge.”

The fight has been delayed since the summer due to COVID restrictions which have also hindered Garcia’s training.

“Our original idea was to do the training camp in Mexico, but we know that the COVID situation there is not good and we have done the whole camp here in my hometown of Torrelavega,” he said. “We knew the definitive date of the fight in October and I have been training since June-July.”

In recent months Spain has enjoyed two big successes on the world stage and Garcia is hoping for a third.

“This is the most important fight of my career,” he said. “I will do my best to make a great performance and bring back to Spain another big victory as my partners Sandor [Martin] and Kiko [Martinez] did.”

Garcia is promoted by Maravilla Promotions, which is headed up by former two-weight world champion Sergio Martinez.

“Maravilla” believes his fighter has the requisite skillset to make an impression in America.

“Garcia is very talented and his fighting style is perfect for America,” said the former champ, who goes up against his old promoter-manager Sampson Lewkowicz who just happens to represent Fundora. “We know it is a very difficult fight for Sergio but also for Fundora. I hope [Sergio] wins, but in case he loses, we are sure that Sergio will do an excellent performance and return to the U.S. in the future.”

Fundora turned professional in 2016 and built a portion of his early record on the road in Mexico, Argentina and Uruguay. As he moved through the ranks he began to impress stateside and over the past couple of years he has beaten the likes of Daniel Lewis (UD 10), Nathaniel Gallimore (KO 6), Habib Ahmed (TKO 2) and Jorge Cota (TKO 4). The 23-year-old sports a record of 17-0-1 (12 KOs).