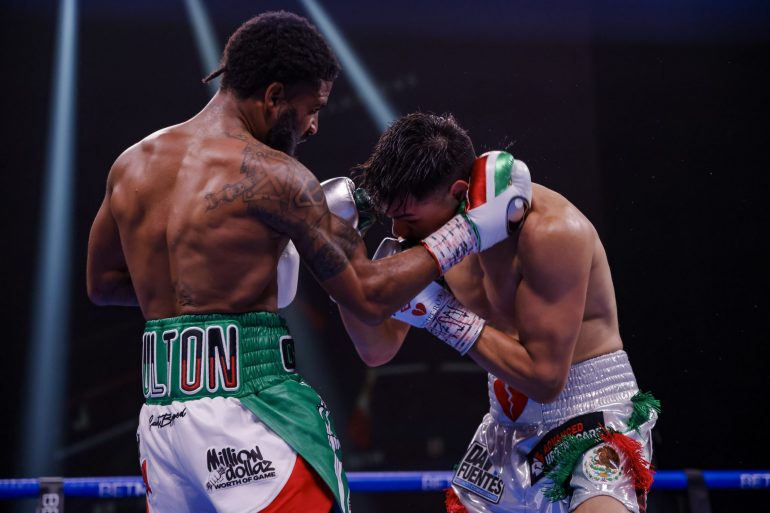 Stephen Fulton unified the WBO and WBA 122-pound titles by holding his own against the relentless aggression, pressure and volume punching of Brandon Figueroa for 12 hotly contested rounds on Saturday at the MGM Park Theater in Las Vegas.

Fulton (20-0, 8 KOs), who by scores of 114-114 and 116-112 (twice), was the sharper technician and landed flush power shots at a higher connect rate than Figueroa even though he fought most of the Showtime-televised PBC main event in the trenches. However, Figueroa (22-1-1, 17 KOs) outworked his highly touted rival in every round and showed underrated craft with his ability to close distance and force Fulton to the ropes where he exacted a concentrated body attack. 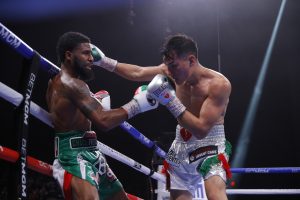 Figueroa was non-stop aggression and pressure but Fulton stood his ground. Photo by Esther Lin/SHOWTIME

Hall of Fame journalist/commentator Steve Farhood, who scores bouts for Showtime Championship Boxing, had the bout even after six and eight rounds and ultimately scored it a draw (114-114), as did one of the official judges (David Sutherland). It was that kind of fight. Those who appreciate clean punching gave Fulton the edge in close rounds. Those who appreciate effective aggression and body punching gave Figueroa the edge in close rounds.

Regardless of how the official judges and the opinionated denizens of Boxing Twitter had it scored, all can agree that it was a damn good championship scrap, a Fight of the Year contender, and 12 rounds that lives up to the proud tradition of great 122-pound showdowns — Wilfredo Gomez vs. Lupe Pintor, Erik Morales vs. Marco Antonio Barrera I, Somsak Sithchatchawal-Mayhar Monshipour, and Israel Vazquez vs. Rafael Marquez I, II and III.

And the way the post-fight interviews went we might get a rematch, although maybe not at junior featherweight.

“You really think you won that fight?” an upset Figueroa, the WBC beltholder and The Ring’s No. 4-rated junior featherweight coming into the fight, asked Fulton. “Everybody here knows I won.

“I put the pressure on for 12 rounds, I hurt him like five times. I came to fight. I didn’t come to hold.”

Fulton, holder of the WBO strap and The Ring’s No. 3-rated junior featherweight coming into the fight, wasn’t hearing it (even though the crowd inside the Park Theater agreed with Figueroa).

“Let’s run it back,” Fulton challenged. “It was a good fight, a close fight. You were more active, but who landed the cleaner shots? I was catching him between shots.”

Figueroa said he wants the return bout but he also announced that he would move up to featherweight (the 126-pound division), so maybe fans will have to wait a bit for what would be an anticipated rematch.

In the meantime, expect Fulton to target The Ring’s No. 1-rated junior featherweight, Murodjon Akhmadaliev, the holder of the IBF and WBA titles.

Aleem, The Ring’s No. 7-rated junior featherweight, called out the winner of the main event after declaring himself a “f__king dog” who delivered “all f__king action.”