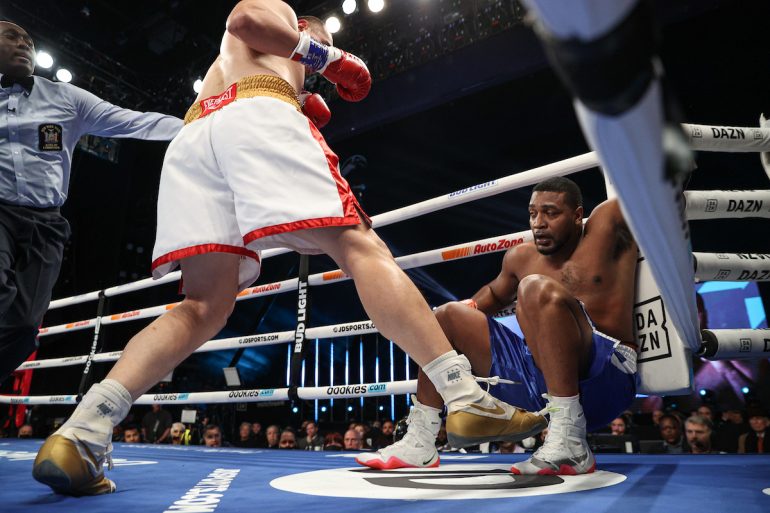 NEW YORK — Chinese heavyweight Zhilei Zhang helped to remove the bad taste from his last outing with a second round knockout of journeyman Craig Lewis at The Theater at Madison Square Garden in New York City.

The eight-round heavyweight bout was on the undercard of the lightweight championship bout between Teofimo Lopez and George Kambosos Jr., which was broadcast in the United States by DAZN.

Zhilei, a 6-foot-6 heavyweight from China, scored two knockdowns in the second, both on straight left hands, to finish Lewis at the 2:10 mark. Lewis appeared out on his feet after the first knockdown, but was allowed to continue. The ringside doctor stepped in to stop the fight after a second knockdown was scored on the next solid punch landed.

It was a much needed injection of excitement into the career of Zhang (23-0-1, 18 KOs), who also had early success in his previous bout against Jerry Forrest in February, scoring knockdowns in each of the first three rounds before fading and settling for a draw.

Two left-handed bombs from Zhilei Zhang and he gets the TKO victory 🇨🇳#LópezKambososJr pic.twitter.com/TQ90fFpqWN

Zhilei, the 2008 super heavyweight Olympic silver medalist, wouldn’t have any similar letdown against Lewis (14-5-1, 8 KOs), who has lost five of his last six, but had never previously been stopped.

Though Zhilei is not rated by The Ring at heavyweight, he is rated no. 13 by the IBF and no. 8 by the WBO.

Cruz, a ten-time New York Golden Gloves champ from Manhattan’s Hell’s Kitchen neighborhood, appeared to settle into the pro style after more than a decade as one of the world’s top amateurs, walking down and landing solid right hands in a fashion unlike her more mobile style.

Two of the judges scored the bout 60-54 while the third found a round to give to the Utah native, scoring it 59-55.

British junior featherweight prospect Ramla Ali 4-0 (0 KOs) had a successful U.S. debut, shutting out Isela Vera (1-1) over four rounds to win by the score of 40-36 on all three cards.