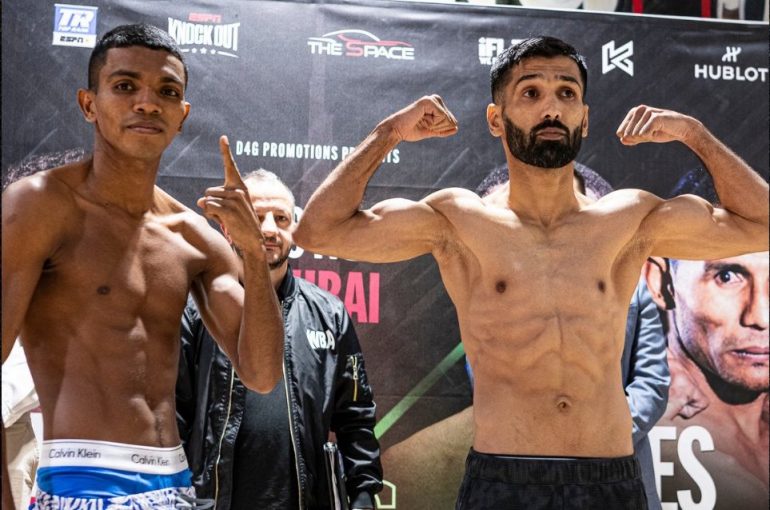 Muhammad Waseem overcame a serious cut over his left eye to win a unanimous decision against Rober Barrera Friday at the Motospace Dubai Investment Park in Dubai, United Arab Emirates.

Waseem (12-1, 8 knockouts) of Quetta, Pakistan took another step closer to securing another shot at a world title with the victory, which came by the scores of 115-113, 115-114 and 117-111. The win was his fourth straight since losing a decision to Moruti Mthalane for the IBF flyweight title in 2018.

With Barrera (23-4, 13 KOs) switching stances from moment to moment, it seemed like only a matter of time before a head clash caused a cut. That happened in round one, when an aggressive Waseem was cut over the left eye. The cut became progressively worse, but didn’t slow down the 34-year-old Waseem, who opened up with a right hand, followed by two left uppercuts and another right with Barrera on the ropes. Waseem’s investment early in the body would pay dividends later on .

Waseem suffered a second cut in the third, this time on his right cheekbone. Barrera, 29, of Monteria, Colombia utilized his movement to keep Waseem off balance, utilizing his own uppercuts to make Waseem pay.

The tide turned in round 9 as Waseem’s aggressive start seemed to drain him. Barrera became more aggressive, landing hard rights and hooks when Waseem was fading. Waseem appeared finished in round ten as he was exhausted and unable to keep his hands up to defend himself. Barrera took advantage, walking Waseem down and banging him to the body and head.

With the fight in the balance, Waseem came back in round 11, reestablishing his jab and backing Barrera up to take control back.

“These two could have done it in a phonebox. One of the best fights that I’ve seen in a long time. And that best man won,” said Danny Vaughan, trainer of Waseem.

Waseem wasn’t the only crowd favorite to score a victory on the card.

Former super middleweight and light heavyweight titleholder Badou Jack (25-3-3, 15 KOs), a Sweden native who splits time in Dubai, finished off the overmatched Samuel Crossed (11-2-1, 7 KOs) with three knockdowns in round two to bring the fight to a halt at the 2:20 mark.

The first knockdown came a minute into the round, courtesy of a right hand to the chin. The second was shortly afterwards with a right hand high on the head, before a third knockdown was initiated by a left uppercut to compel the referee to stop the bout.

“It was easy work,” admits Jack, who says he’s ready to fight again before the year ends. “We had five opponents who pulled out. This was the guy who came so credit to him.”

Jack, 38, was fighting just below the cruiserweight limit of 200 pounds after coming in just over the light heavyweight limit in his previous bout in June. He has now won two straight since suffering back to back defeats to Marcus Browne and Jean Pascal.

Earlier in the night, Ohara Davies (23-2, 16 KOs) of London ended 14 months of inactivity to score his fifth straight victory, outboxing Nicholas Mwangi (10-4-1, 7 KOs) of Kenya to win a unanimous decision in a ten round junior welterweight bout by scores of 99-91 on all three cards. Mwangi, who is based in Dubai, was a late replacement for Ismael Barroso, who was unable to make the trip to Dubai.

Davies controlled the bout with the jab but rated his performance as just a 4 out of 10, saying he should have gotten rid of the late replacement Mwangi in the early rounds. He says he hopes to see the bout with Barroso rescheduled by March.

DANSO DOWN IN THE SECOND!

Earlier in the night, former Canelo Alvarez foe Rocky Fielding (29-2, 16 KOs) won his second straight since that defeat, dropping Emmanuel Danso (32-7, 26 KOs) three times in the second round, convincing him to remain on his stool afterwards.