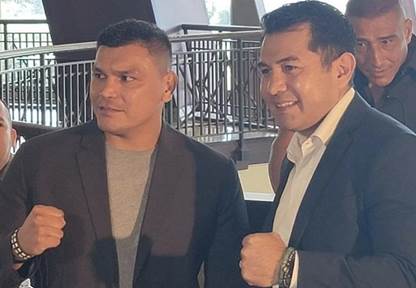 It was billed as the last great battle of two Mexican warriors getting in the ring for one final chance to claim a few extra measures of national bragging rights.

But Marco Antonio Barrera is more interested in processing his long and illustrious career and leaving behind a good set of memories for everyone involved, from his former bitter enemies to his own son. And is with that interest in mind that he accepted to participate in the exhibition bout against fellow former champ Daniel Ponce de Leon, which will take place on Saturday, Nov. 20 at the Inn of the Mountain Gods Resort & Casino in Mescalero, New Mexico.

“It was an offer from Teresa Tapia, for her charity,” said Barrera, 47, in a phone conversation during a halt in his training in Guadalajara, referring to one of the event’s promoter, who is also a manager and widow of the late great Johnny Tapia, one of his former foes with whom he became close later in life. “I accepted because I was a good friend of Johnny. It is a great charity and they are great people. This is the only way I would do it. I am not in a position to do competitive fights anymore.”

The offer was enticing enough to convince Barrera to climb into the ring for only the second time in more than a decade, in a card named as “La Ultima Batalla – The Last Stand.” Barrera (67-7, 44 KOs) will make only his second exhibition appearance since the International Boxing Hall of Fame inducted him in 2017. The “Baby Faced Assassin” last fought fellow retired boxer Jesus Soto Karass in a six-round contest featuring two-minute rounds, 16-ounce gloves, and no judges on June 11, 2021, Pico Rivera, Calif. This event will feature the same rules.

But lately, Barrera has worried more about rekindling old friendships than reviving old rivalries. It is in that interest that he started a podcast with an unlikely co-host.

Not that it has been easy or anything like that.

“It is difficult because I still don’t like him (laughs) but we love doing it and keep sharing our passion with people is great,” said Barrera when discussing his “Un Round Más” (One More Round) podcast that he co-hosts with former bitter archrival Erik Morales. The duo has a unique chemistry on screen that contrasts heavily with the mutual spite they displayed for each other in the ring during their memorable trilogy back in the early 2000’s, in which they cemented their mutual legacies in three brutal slugfests that galvanized Mexico.

Now, after so many bruising wars in a career that spanned so many memorable fights against the likes of Manny Pacquiao, Naseem Hamed, Junior Jones and so many others while winning the hearts of millions of fans, Barrera appears more interested in creating a more intimate setting in which he can develop more lasting memories for less people.

One in particular seems to be the focus of his renewed interest.

“This time is different because I enjoy it more,” said Barrera, about the one pre-fight ritual that he looks forward to recreate now that his chaperon during that walk will be old enough to remember it in the future. “I will be walking into the ring with my son (Marco), who is 15 now, enjoying the walk. I couldn’t do it before because he was a baby, but now it’s great to have him with me.”

In De Leon (45-7, 35 KOs), of Chihuahua, Mexico, he will be facing a fellow retiree who has already left his mark in the world of boxing, a 2000 Mexican Olympic team member who started his pro career with 24 consecutive victories, including 23 by knockout.

Will we see any flashes of the best, vintage Marco Antonio in this bout?

“Well, Ponce de Leon is a southpaw, and I would love to pull some of the moves that I made against Naseem Hamed,” said Barrera, who still remembers that war against the British-Yemeni “Prince” as one of the finest in his career. “I won that one when everything was against me, the betting odds, the predictions of the experts that didn’t give me any chance of ending on my feet. I hope they remember me for that one.”

The way in which Mexican fans will remember their boxing heroes has been a subject of great debate lately, and Barrera surely has thoughts on it. Engaging in exhibition bouts will not add much to his resume, but it does a lot to keep his name in the hearts and minds of fans, young and old alike. Being a commentator on Mexican TV for 12 years did its part to keep his name fresh, too. But when asked to delve into the legacy debate, Barrera acknowledged that, as an ongoing and still developing situation, it is not advisable to make predictions.

“I think Canelo is still fighting and still building his legacy,” said Barrera, in a short comment on the ongoing Canelo vs Chavez all-time greatness debate. “Having exhibitions bring new people to boxing, it is good. But only time will tell who stays in the hearts of the people and who doesn’t”.

Donating one’s time and effort to a charitable endeavor will certainly go a long way in securing an extra few memories in his fan’s minds. And maybe, one more cherished memory in his son’s mind as well.