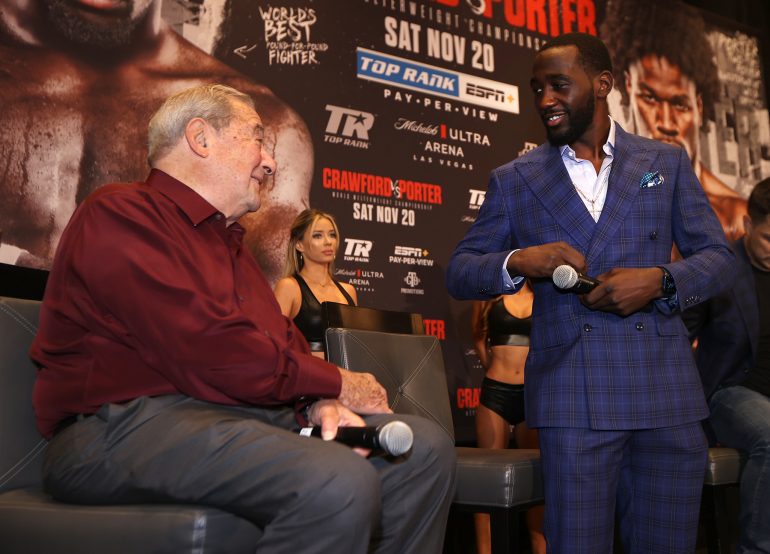 As Terence Crawford heads into the highest-profile fight of his career, one of the subplots is his impending free agency.

The outcome, of course, will have a major impact on the business side of his career as the fight represents the last one on his promotional contract with Top Rank.

Will he remain with the company? Will the company want to retain his services? Will he have other suitors?

Crawford acknowledged the imminent expiration of the deal but did not want to talk about what’s next in terms of his business.

“My main focus is Shawn Porter,” Crawford told The Ring on Wednesday. “All that (contract stuff) we can talk about after the fight.”

While he said he was happy with the efforts of Top Rank and ESPN promoting the fight, he did not give Top Rank much credit for making it happen.

“I put more into the WBO than anybody else because they mandated the fight,” Crawford said.

Crawford (37-0, 28 KOs), 34, of Omaha, Nebraska, who has been with Top Rank since 2011, had about two years left on his deal when he signed an extension with the company in September 2018. It coincided with the announcement of his first welterweight title defense against Jose Benavidez Jr. a month later and bumped his minimum purses to at least $3 million per fight, though he will make about double that for fighting Porter (31-3-1, 17 KOs).

At the time he signed the extension, Crawford cited the partnership between Top Rank and ESPN as a key reason for doing the deal. But it was not until landing the fight with Porter that Crawford was able to secure a marquee fight in the talent-rich division because all of his natural rivals – Porter, Errol Spence Jr., Yordenis Ugas, Keith Thurman and Danny Garcia chief among them – are all with rival Premier Boxing Champions, which has had a rocky relationship with Top Rank, although it has improved recently due to their collaboration on the second and third Tyson Fury-Deontay Wilder heavyweight championship fights.

But neither side had any intention of making Crawford-Porter until the WBO mandated it.

Asked if he or his representatives have had any talks with Top Rank about a new contract, Crawford replied, “Not yet.”

Top Rank chairman Bob Arum has long had massive respect for Crawford’s talent but been disappointed by his lack of his commercial success. Arum has also, at times, been critical of Crawford’s interest in helping to promote his events. 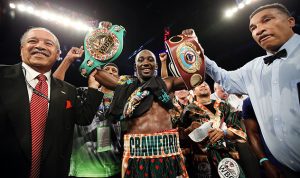 Crawford’s two previous pay-per-view fights, which were against relatively unknown Viktor Postol in a junior welterweight title unification fight in 2016 and a faded Amir Khan in a welterweight title defense in 2019, were commercial bombs.

Crawford-Porter, however, is far more marketable and viewed by most as far more competitive than the Postol or Khan fights. Crawford has also been much more cooperative in the promotional efforts for this bout than he has been for many of his other fights.

He said he is enjoying the promotion and is pleased with Top Rank’s efforts promoting the fight.

“They put more into promoting this fight than they did into promoting any other fight, so I’m happy for that,” Crawford said. “I’m enjoying every bit of it.”

So while the relationship between fighter and company remains good, it does remain to be seen how much Top Rank will press to try to keep Crawford, especially if he defeats underdog Porter. 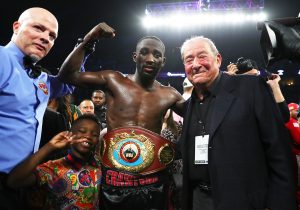 “Look, I remember when we didn’t have these long-term contracts,” Arum said. “As long as we did a good job and we produced for the fighter, and the events made sense for us, we continued to work together. If we produce for Crawford, I believe he’ll stay with us, maybe on a fight-by-fight basis. We believe he will see we are doing the best for him.”

If Crawford defeats Porter and remains with Top Rank, be it on a new deal or fight by fight, the best hope for a major fight would be for undisputed junior welterweight champion Josh Taylor to move up to welterweight to challenge him next year. That is a fight Arum said he would be interested in pursuing if it interests Crawford and Scotland’s Taylor, who would have to win his mandatory defense against Jack Catterall on Feb. 26