Akhmadaliev: “We will be discussing unifications” after taking on Velazquez 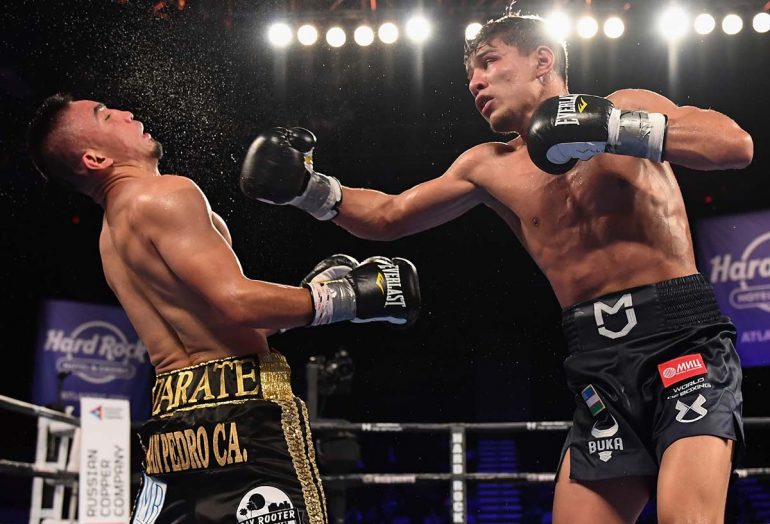 IBF and WBA junior featherweight titleholder Murodjon Akhmadaliev will put his titles on the line against late substitute Jose Velasquez at the SNHU Arena, Manchester, New Hampshire on Friday, Nov. 19.

Akhmadaliev, who is rated No. 1 by The Ring at 122-pounds, welcomes his return to action after fighting in his native Uzbekistan back in April, where he stopped Ryosuke Iwasa (TKO 5).

“I’m happy to be back in the ring at this difficult time,” Akhmadaliev (9-0, 7 knockouts) told The Ring through Alik Frolov. “I’m glad that I’ll have an opportunity to defend my titles in New England on November 19th.”

The 27-year-old southpaw, who won silver at the 2015 World Championships and bronze at the 2016 Olympics in a decorated amateur career, had been scheduled to face Ronny Rios before he fell out after testing positive for Covid-19.

Akhmadaliev isn’t bothered by the late change in opponent.

“I leave that part to my team, all I do is train,” said the Joel Diaz trained fighter. “I hope that [original opponent] Ronny [Rios] is feeling well, it’s a shame that he cannot face me, but it is a great chance for Jose and I am sure he will put everything into this fight. I expect fireworks – expect war.”

It also marks the first time he has fought since his homecoming, though he has now turned attention to new adventures.

“I was really happy to fight in front of my people – it was amazing,” he said proudly. “It was a sold-out arena with 12,000+ people – insane energy. But now it’s time to perform in front of New England people.”

Akhmadaliev’s manager, Vadim Kornilov, who is famed for his work with Dmitry Bivol, Ruslan Provodnikov and Viktor Postol among others, welcomes fights with the other top fighters in the division.

“We are looking forward to more challenges,” he said. “[We] will be discussing possible unifications next.”

Velasquez turned professional in 2013. The Chilean native went 8-6-2 in his first 16 fights. However, he has since won 21 consecutive fights, taking his overall record to 29-6-2, 19 KOs. It should be noted the level of opposition was middling. To his credit, he has won twice in America taking the unbeaten records of Melvin Lopez (TKO 9) and Ariel Lopez (UD 10).

The DAZN triple-header will be headlined by Demetrius Andrade making the fifth defense of his WBO middleweight title against Jason Quigley and also feature Akhmadaliev vs. Velasquez and Julio Cesar Martinez will put his WBC flyweight title on the line against McWilliams Arroyo. The broadcast will begin at 9 p.m. ET/ 6 p.m. PT.