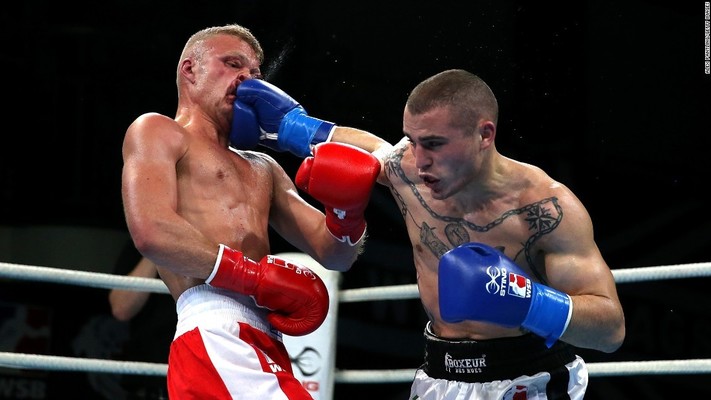 Michael Magnesi is so serious in his bid to make a name for himself in a crowded 130-pound division that he has migrated to the United States.

The 26-year-old, who resides in Cave, Italy, has built an unbeaten record fighting and defeating modest opposition. In his most recent bout on April 23, Magnesi stopped South Africa’s Khanyile Bulana in the opening round in a clash between unbeaten prospects.

Magnesi’s most notable wins as a pro took place in 2019. In June of that year, Magnesi knocked out former fringe contender Emanuel Lopez of Mexico in Round 10. Over four months later, Magnesi (19-0, 11 knockouts) stopped Ghana’s Maxwell Awuku, who challenged former WBC titlist Miguel Berchelt in February 2018, after Round 6.

Two weeks ago, Magnesi signed a co-promotional deal with Lou DiBella and Joe DeGuardia of Star Boxing. DiBella believes Magnesi can contend and is ready for the big stage against the top fighters at junior lightweight in 2022.

Lagos (16-5-3, 11 KOs), who resides in Valencia City in the Philippines, has not fought since April 2019, knocking out overmatched Michael Padayag in the opening round. He is unbeaten in his last five bouts since losing to Ray Ximenez in February 2018.

Ward (4-1, 2 KOs), who resides in Moate, Ireland, was an amateur standout who suffered a freak knee injury during his pro debut in October 2019 against Marco Delgado. He would lose the fight but avenged the loss by defeating Delgado by decision last March.

In his most recent bout on August 3, Ward defeated Tory Williams by decision over six one-sided rounds. DiBella is also high on the 28-year-old Ward.

“With Magnesi and ‘Mighty’ Joe Ward fighting on the card, two of Europe’s finest young fighters are getting the opportunity to put their skills on display,” said DiBella. “Check this show out on Fite.tv. It’s going to be a great night of boxing.”

Also on the card, unbeaten junior welterweight Alex Vargas (11-0, 4 KOs), of nearby Bellport, will square off against Argentina’s Sebastian Chaves (5-2, 2 KOs) in a six-round bout.