Abdullah Mason begins a promising pro career with a bang 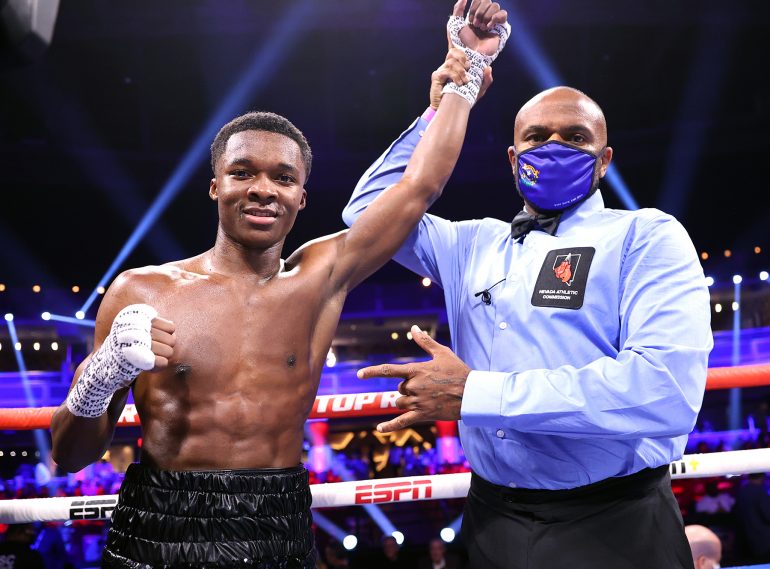 LAS VEGAS – Abdullah Mason didn’t expect the nerves to attack that quickly. The 17-year-old from Cleveland, Ohio, needed a minute or two to find out it was just another fight, like the 80 some-odd amateur fights he previously had.

Once he found that rhythm, Mason was fine.

The rangy 5-foot-9, southpaw lightweight prodigy began a pro career tabbed with great promise with a second-round knockout over Jaylan Phillips on Friday night from the Virgin Hotels Las Vegas in a Top Rank card televised on ESPN.

“My first experience was great, there was a different vibe in there and a different environment and I had to relax more,” Mason said. “I felt like I wasn’t fighting like myself the first minute. It was different working with eight-ounce gloves, opposed to 16-ounce gloves.

At the outset, Mason flicked a good jab at the outset. Phillips, also a southpaw, tried to combat Mason’s aggressive style with a jab of his own. But by the middle of the first round, Mason had Phillips (1-1, 1 knockout) retreating. There was a brief burst by Phillips, forcing Mason into a corner, but the teenager jabbed his way out of it.

In the second, Mason came right out at Phillips, once again working behind the jab. Phillips tried going to the body, though was too slow for Mason. He opened up in the last seconds of the second, throwing one overhand left after another, before referee Allen Huggins stepped in to rescue Phillips of any more punishment at 2:09 of the second.

In a scheduled eight-round junior lightweight bout, Andres Cortes (16-0, 9 KOs) remained undefeated by stopping Mark Bernaldez (23-5, 17 KOs) at 2:12 of the third round.

In the opening bout of the night, super middleweight Rowdy Legend Montgomery (7-3-1, 5 KOs) stopped Martez McGregor (8-6, 6 KOs) at 1:10 of the third round. Middleweight Ian Green (15-2, 11 KOs) pulled off a mild upset by handing Tyler Howard (19-1, 11 KOs) his first professional loss with a unanimous eight-round decision.