Ring Ratings Update: All aboard the Boots Bandwagon! Shakur Stevenson jumps to No. 1 at 130 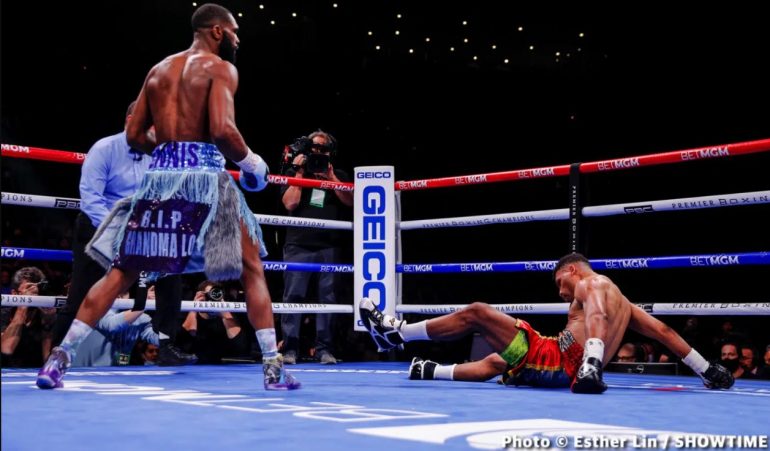 The Ring Ratings Panel had three weeks’ worth of debate on what to do with Oscar Rivas and Sandor Martin following their October victories, but there was no argument among the panelists on what to make of Shakur Stevenson’s 10th-round stoppage of respected beltholder Jamel Herring or Jaron “Boots” Ennis’ first-round blowout of experienced gatekeeper Thomas Dulorme. 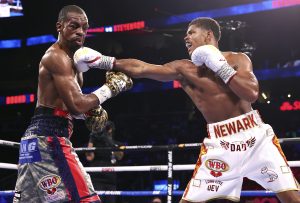 Stevenson was too fast, too sharp and too strong for Herring to handle, but can he hang with the lightweight Young Guns? Photo by Mikey Williams / Top Rank

The near-flawless performance that Stevenson (17-0, 9 KOs), a former WBO featherweight beltholder who was Ring’s No. 5-rated junior lightweight, executed on October 23 in Atlanta vaulted him to the No. 1 spot in the 130-pound rankings.

“It speaks volumes for his talent that his career best performance came in his biggest and toughest test to date,” said panelist Anson Wainwright. “Highly impressive.”

Ennis, who was No. 7 in the welterweight rankings going into the Dulorme fight, was expected to beat the former 140-pound contender/title challenger who had seen better days – and look good doing so. But few believed the 24-year-old Philadelphian would blast the usually durable veteran in one round. Ennis advanced to the No. 5 spot in Ring’s welterweight rankings.

“Special, special talent, I think he’s a generational talent,” gushed Wainwright, clearly on the Boots Bandwagon. “He could well be a pound-for-pound guy in the future. I thought he’d win but didn’t expect it to be in a round.”

Panelist Martin Mulcahey was little more measured in his praise for Ennis, although he envisions a bright future for Ring Magazine’s 2020 Prospect of the Year.

“I am on the Jaron Ennis bandwagon as well,” said Mulchaey, “but I am still a bit amazed by some of the Showtime commentary (one commentator likened him to best prospect since Roy Jones Jr.). I seem him as a future champ for sure but I’m not sure about the ‘generational talent’ thing. Yet. Maybe I am gun-shy because other ‘Ennises’ that did not live up to hype.”

Diego Morilla reminded his fellow panelists that “Dulorme has been damaged goods for a while now. I’m not sure how much of a measuring stick he can be at this point.” 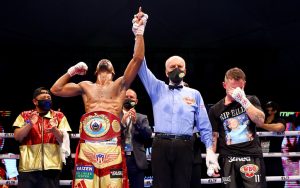 That can’t be said about Herring, who had assumed the No. 1 junior lightweight ranking after the panel voted to drop Oscar Valdez from the ratings following his positive PED test in September. Wainwright suggested dropping Herring to No. 3.

Panelist Michael Montero agreed with Stevenson at No. 1, as did the rest of the panel, but did not think Herring should drop below No. 2-rated Miguel Berchelt.

“Both Herring and Berchelt suffered dominant stoppage losses this year, but Herring also beat (Carl) Frampton back in April, so I’d keep him above Berchelt right now,” Montero said. “Whenever we bring Oscar Valdez back in, he’s No. 2 right behind Stevenson.”

“Yes to Stevenson at No. 1, and Herring to No. 3,” Morilla said. “Regardless of (Herring’s) previous successes, that was a really bad loss.”

Added Mulcahey: “I’m not in love with Shakur Stevenson being rated No. 1, but it is a weak division overall and he dominated our current No. 1, Jamel Herring. I do think Stevenson did a very good self-evaluation in that he shows his best when put in against high-level fighters. So, he may look unmotivated dominating and not taking chances against lesser mandatory challenger type opposition. I agree with Herring to No. 3.”

Earlier in the month of October, Panelist Adam Abramowitz brought up Rivas, then the No. 9 rated heavyweight (ahead of No. 10 Joe Joyce), during the debate on whether to add Tyson Fury to the pound-for-pound rankings following the Ring champ’s dramatic stoppage of Deontay Wilder.

“I’m trying to figure out how we have Oscar Rivas above Joy Joyce at heavyweight, but that’s for another day,” Abramowitz quipped.

Gray, having heard similar opinions among fans on Twitter, put the question to the panel following Rivas’ 12-round decision over unbeaten (13-0) but inexperienced and unheralded Ryan Rozicki for the WBC’s new bridgerweight title.

Wainwright responded with the suggestion to drop Rivas from the heavyweight rankings, advance Joyce to No. 9, and bring in Croatian standout Filip 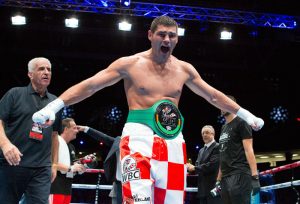 “Rivas outpointed Ryan Rozicki to become the inaugural WBC bridgerweight champion but until we have more fights (in that new division) it’s difficult to come up with any kind of rankings here,” noted Wainwright.

“Question: Isn’t Oscar Rivas still considered a heavyweight by the other sanctioning bodies? Wouldn’t he be free to fight any of the other heavyweights if the opportunity came up? I don’t think we should disqualify him from the heavyweight rankings.

“Also, along the same lines as our drug testing policy, just because the WBC recognizes bridgerweight doesn’t mean we have to, at least for now.

“Whatever we consider Oscar Rivas to be, I don’t think he’s a top-10 heavyweight at the moment. I agree with Anson that we could take Rivas out, move Joyce up, and add Hrgovic at No.10.

“Also, I’m not sure (No. 8-rated Michael) Hunter warrants a top-10 heavyweight rating at the moment either. In the last two years he beat Shawn Laughery and Mike Wilson. Meanwhile, Robert Helenius stopped Adam Kownacki twice.

“For a weight division designed to reduce unfair weight advantages, we ended up with a 20-pound weight disparity. You couldn’t write it. I agree with Anson and Michael on taking Rivas out at heavyweight, moving Joyce up and adding Hrgovic. “Rivas has had nothing significant at heavyweight in almost three years. I’d leave Hunter in for now.” 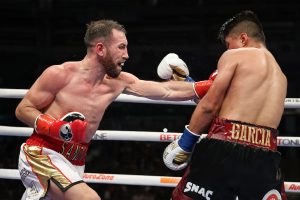 On October 16, four-division titleholder Mikey Garcia lost for only the second time in his 42-bout pro career when he was outpointed by unheralded Sandor Martin, a former European 140-pound champ from Spain. Martin, who scored a 10-round majority decision over the crowd favorite in Fresno, California, fought Garcia at a 144-pound catchweight.

Wainwright suggested that Martin could crack the welterweight rankings, even though he hinted that the Spaniard may have caught a fading version of Garcia.

“Credit to Martin for the upset but Mikey looked ring-rusty, 600 days between a fight will do that,” Wainwright said. “I also think, at 33, (Garcia is) past his prime. Interesting to see what he does from here. Martin was previously the European champion (at 140 pounds) and solid enough. I could see him entering at No. 10.”

Abramowitz and Morilla were not in favor of Martin entering the 147-pound rankings.

“Good win for Martin but Mikey just didn’t have a resume at 147,” noted Abramowitz. “A blowout loss to Spence and a mediocre performance against Jessie Vargas. I didn’t think much of Mikey at 147. I like what the other guys have done better in the division and wouldn’t drop them because Mikey has turned into an indifferent, often part-time fighter.”

“The whole thing sucks for poor Sandor, but I believe he shouldn’t get to make the cut at 147 based on a catchweight win against a fighter who is not ranked in the division. He got the big win and the respect, and that is plenty already, but a spot in a talent-laden welterweight ranking based on a win in a fight in which both fighters agreed to not care enough about making the proper weight for a proper division seems too much of a reward. Pick a division, get a win, we’ll rank you. Leveled playing field, all around.”

Gray seemed ambivalent about Martin’s ranking but did not want to chalk the upset up to Garcia being “rusty,” “indifferent,” or “old.”

“If Garcia-Martin accomplishes anything, I hope it stops so-called experts from diminishing the term ‘European level.’ We just saw what an excellent European fighter can do. Mikey didn’t really make any excuses, and neither should we. We can talk ring rust, inactivity, weight, lack of motivation, I don’t really care. It’s Mikey’s job to stay sharp in the gym. Sandor Martin put on the performance of his life and won convincingly.

“As I review the ratings, I’m a bit uneasy about Stanionis and Abdukakhorov being rated Nos. 8 and 9 respectively. Both are unbeaten and have serious potential, but what were the wins that got these kids rated in a red-hot division? A faded (Luis) Collazo? I’m obviously complicit, but I don’t really get it. Personally, I’d like to see Avanesyan hold a spot at 147 and Martin enter at No. 10. Abdukakhorov to exit.

“At the very least, we should contact Martin’s brain trust and ask if he has any intention of campaigning at 147. He is a junior welterweight.”

Wainwright realized that he meant to suggest that Martin enter the 140-pound rankings at No. 10. However, Gray was against that because the Garcia fight was technically a welterweight bout.

“He’s a career 140-pounder,” said Wainwright. “(The Garcia fight) was the heaviest he’s been and I think that was only because the fight was put together relatively late notice. Mikey was no welterweight, and neither is Martin. I 100 percent wouldn’t rate him at welterweight.”

Cruiserweight – Mairis Briedis remains champion after defending his IBF and Ring titles with a third-round stoppage of unrated Artur Mann. Matesuz Masternak remains at No. 9 following a fourth-round TKO of unrated Armend Xhoxhaj.

Welterweight – Jaron Ennis advances to No. 5.

“Jamal James was stopped by rugged Radzhab Butaev in nine rounds,” mentioned Wainwright. “Excellent win for Butaev, who might be our next guy to enter.”

Added Morilla: “Unlike Dulorme, James was a solid fighter who was utterly destroyed by Butaev in a great performance. Too bad (Butaev) can’t come in right now.”

Junior welterweight – Jose Zepeda remains at No. 3 after a first-round demolition of previously unbeaten (but unrated) 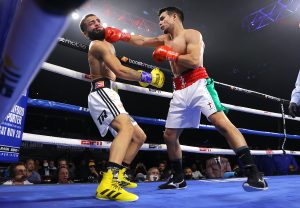 “Turns out the Jose Zepeda-Josue Vargas (weigh-in) melee lasted longer than the fight,” quipped Wainwright. “Zepeda maintains his No. 3 position behind Jose Ramirez, who edged him in a title fight.”

Added Mulcahey: “Wow, Jose Zepeda delivered some frontier justice to Josue Vargas for that press conference dust up. Was a close fight against Jose Ramirez, but given Ramirez’s more consistence performances think we have to keep Zepeda just behind him even on current form.”

Junior lightweight – Shakur Stevenson advances to No. 1. Jamel Herring drops to No. 3.

“Navarrete obviously stays at No. 1,” said Wainwright. “Although Gonzalez is at No. 10, I would keep him there. He put up a game effort, nobody banging on the door and feel Gonzalez could beat a few of the guys rated above him.”

Junior flyweight – Elwin Soto drops from No. 2 to No. 6 after suffering an upset decision loss to unrated Jonathan Gonzalez, who enters at No. 4. Jesse Rodriguez advances from No. 7 to No. 5 on the strength of an impressive fourth-round KO of unrated Jose Alejandro Burgos.

Ones to watch (by Wainwright and Mulcahey) –

“Really like Michel Rivera, and he was in against a pesky spoiler in Romero,” added Mulcahey. “Wish he could have delivered more damage or highlights but is difficult against guy like that. Agree, has good chance to be next in if put in against higher level foe.”

Bantamweight – Forget his record, Jonas Sultan is a fun watch (better than straight ahead banger Provodnikov type) and coming into his own for sure, says Mulcahey. Solid win over good prospect Caraballo, so is still a distance away from top 10 but is the type who will get by on fan appeal instead.