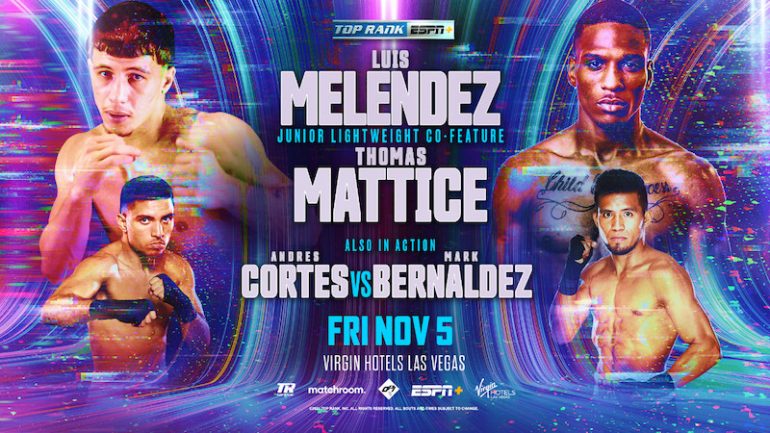 The eight-round bout will take place at The Theatre inside the Virgins Hotel Las Vegas and will precede the main event unification bout between women’s WBO junior lightweight titleholder Mikaela Mayer and IBF titleholder Maiva Hamadouche. That matchup will also have the vacant Ring Magazine championship at stake.

The crossroads clash between Melendez and Mattice replaces the middleweight bout between Janibek Alimkhanuly and former world titleholder Hassan N’Dam, which has been postponed to a later date.

Melendez (16-1, 13 KOs), who is originally from Puerto Rico and now resides in Miami, Florida, knocked out former fringe contender Walter Estrada in the second round of his last bout on July 22.

Earlier this year, the 23-year-old fought four times in two weeks, going unbeaten in that span and winning three of those fights by knockout.

“I’m coming to give the fight fans a great show,” said Melendez, who has fought his last seven bouts in Colombia. “When you stay ready, good things happen. I’m always in the gym and in shape, and I give credit to Mattice for being ready as well.”

Mattice (17-2-1, 13 KOs), who resides in Cleveland, Ohio, last fought on June 19, when he stopped Deivi Julio in four rounds. He has won back-to-back fights since losing by majority decision to Isaac Cruz of Mexico on February 14 of last year.

The 31-year-old, who is promoted by Vick Green, notched his most important win in September 2019, when he stopped prospect Michael Dutchover in eight.

“I’ve been staying ready, and when the opportunity came to fight Melendez, I did not hesitate,” said Mattice, who has fought a handful of times on the ShoBox series. “Everybody has been turning me down at 130 pounds. This (fight against Melendez) is a big opportunity.”

Also taking place on the Top Rank card will be an eight-round junior lightweight bout between Las Vegas resident Andres Cortes and Mark Bernaldez of the Philippines.

Cortes (15-0, 8 KOs) last fought on August 14, when he knocked out former featherweight title challenger Genesis Servania in the opening round. The 24-year-old has been fighting under the Top Rank banner since last year.

Bernaldez (23-4, 17 KOs) stopped Juan Kantun in his last bout on July 9. The 27-year-old has won his last three fights since losing on points to the unbeaten Albert Bell on July 2 of last year.