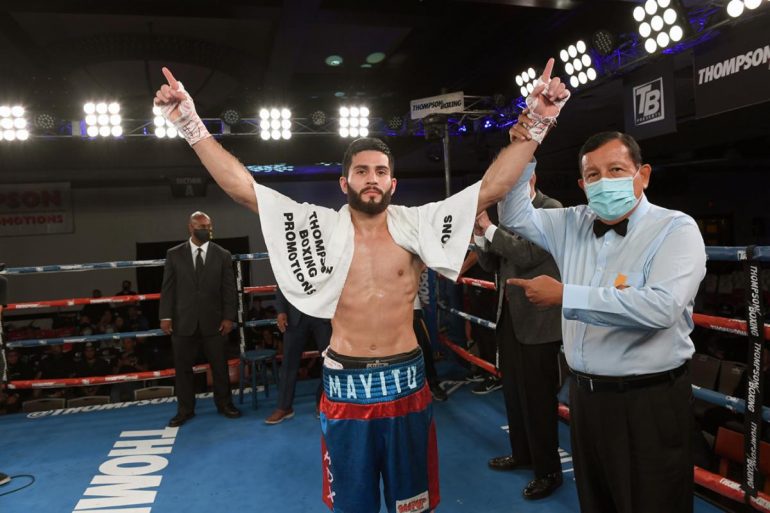 Madueño (26-0, 24 KOs) ruthlessly attacked the body of Rodriguez (25-15-1, 13 KOs) with both hands until a series of rights  sent the veteran to the canvas early in Round 5. Madueño followed up with a barrage of hooks to the head and body until referee Raul Caiz Sr. ended the fight at the 2:46 mark.

“I wanted to send a message to the rest of the lightweight division by stopping Rodriguez,” said Madueño, show scored an impressive 10th-round stoppage of tough gatekeeper Sonny Fredrickson in September. “He’s only been knocked out by a few guys, so it was very satisfying to get the victory by pounding him out of there. I’m grateful to my promoter Thompson Boxing for keeping me busy throughout this pandemic. When my name is called to fight for a world title, I’ll be more than ready, my time is coming.” 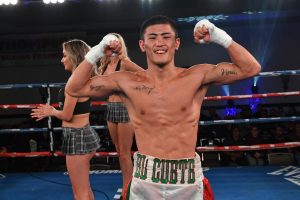 In the eight-round co-main event, Katsuma Akitsugi (7-0, 1 KO) outworked and outlanded Eros Correa (10-1, 7 KOs) to a majority decision victory. In the early rounds, Correa landed his overhand right, while Akitsugi was applying pressure, however, after an even first half of the fight, it was Akitsugi who made the adjustment, and flourished in the final rounds. Scorecards read 78-74 twice and 76-76.

“I knew Eros was going to be the toughest fight of my career, but I had confidence in myself that I would come out victorious,” stated Akitsugi, whose last four bouts have been on Thompson Boxing Promotions cards. “This is the second undefeated fighter that I’ve defeated. I’m hoping with a few more fights, I’ll be able to get ranked or maybe fight for a regional title.”

In the second fight of the evening, Esteban Muñoz (5-1, 3 KOs) defeated Manuel Martinez (6-5-4, 3 KOs) by way of a first-round knockout, in a junior welterweight bout scheduled for four-rounds. Muñoz landed a picture-perfect right hook to the midsection, sending Martinez to the canvas. Martinez could not recover, and the bout was over at the 1:50 second of the opening round.

“I knew the fight was over when I landed that body shot,” said Muñoz. “There was a lot of power behind that punch and I was glad I got the knockout. I’m hoping I can get one more fight in by the end of the year, and finish 2021 off strong.”

In the opening four-round junior featherweight bout, Lazaro Vargas of Coachella, Calif (4-0, 2 KOs), defeated Ulises Rosales (0-5), of Tijuana, by way of a unanimous decision. Vargas was the aggressor throughout the fight as he landed a lot of power shots to the head and body. To Rosales credit, he withstood the pressure that Vargas was applying and held on to make it to the final bell in a spirited effort. Scorecards read 40-36 across the board.

“I’m happy that I got the win, and my opponent took a lot of punishment,” said Vargas. “I was hitting him with a lot of big shots, and he hung in there, so I give him a lot of respect for being a warrior. I got some good rounds in and now it’s back to the drawing board as I know I must improve in some areas of my game. I’m still learning and I’m getting better with each fight.”