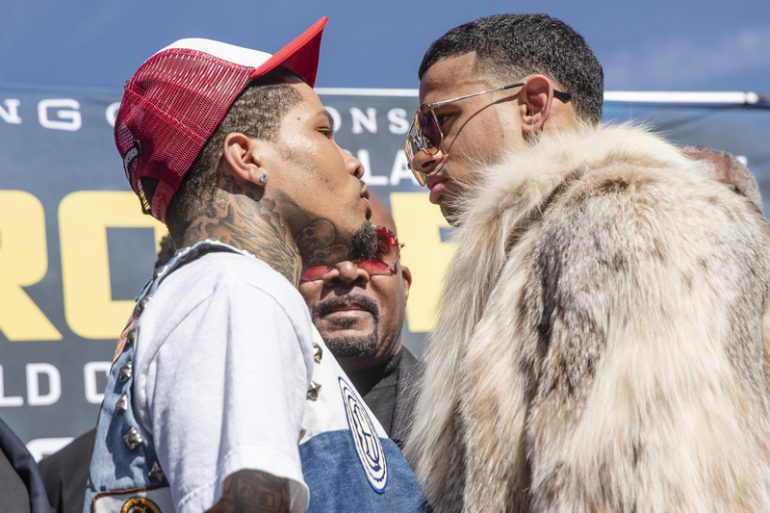 Tank and Rolly engage in a heated staredown prior to their original fight date late last year. Photo by Esther Lin/ SHOWTIME
21
Oct
by Diego Morilla

If you logged in to read a verbatim transcription of the Davis-Romero press conference that took place earlier today via YouTube, please accept your apologies.

After some 30 minutes of preliminary comments from the TV executives and promoters du jour (including a gabby Floyd Mayweather taking the podium for a 20-minute rant), Gervonta “Tank” Davis and Rolando “Rolly” Romero finally took the mics to promote their lightweight bout to take place in L.A.’s Staples Center on Dec. 5.

What transpired afterwards was a distasteful exchange of every insult in the book, most of them unfit to either print or repeat. The video of the entire presser is included below.

Amidst an avalanche of F-bombs and N-words going both ways, including a graphic and coarse description of a “skull sodomy” threat by Romero, a few quotes were produced that show the deep distaste that both fighters profess for each other.

“In the lightweight division right now, we have fighters with great names, but not drawing power. And Tank has drawing power,” said Mayweather when introducing his charge. Davis will clearly be the A-side of a fight in which he will once again be facing what most critics believe to be sub-par opposition, given Romero’s limited experience of barely a dozen professional bouts.

Romero saw only the positive side of that fact.

“I must be the PPV fighter with the least amount of fights,” he claimed in his opening statement, “and still I am gonna knock you the f— out. You hear that?,” he finished.

“This guy is here to talk, that ain’t gonna work. He doesn’t talk about the skills, he talks about how hard he punches, that’s all”, said Davis, while pointing out at the ridiculousness of Romero’s fur coat (his only upper body garment for the occasion) under the blazing sun of the outdoor event. “It’s not personal. It ain’t beef. It’s business. It’s like that.”

Romero made sure to let everyone that this is, indeed, a personal issue.

“I am going to knock this chump the f— out. That’s what’s up,” said Romero. “I am not angry, just focused. He got a big f—–g head, it’s gonna be hard to miss,” he added, while rambling about an occasion in which Davis allegedly failed to show up to a pre-arranged sparring session with Romero, who alleged that Davis has been afraid of him since then.

In a final attempt to defuse the situation, Davis closed the show with a cliché that we can only hope will become true.