Dillian Whyte suffers shoulder injury, his Oct. 30 fight against Otto Wallin is off 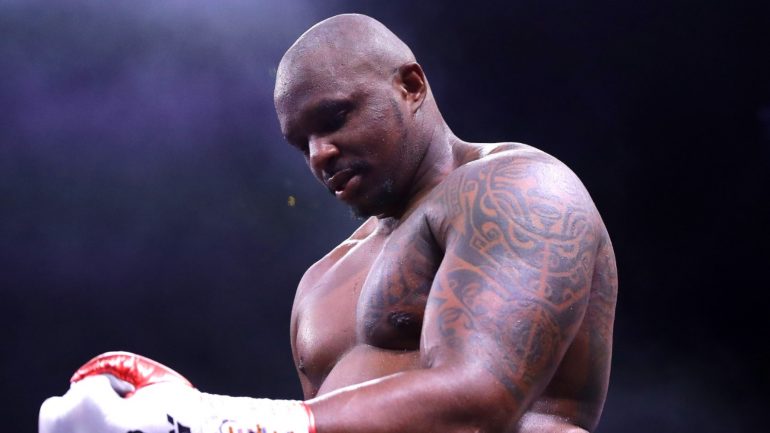 The Dillian Whyte-Otto Wallin fight scheduled for October 30 has been cancelled due to a shoulder injury suffered by Whyte during training. Boxing Scene’s Keith Idec was the first to report on the cancellation.

The nature and extent of the injury have not been revealed, but a case of Fury-itis has not been ruled out.

On Oct. 6th, Whyte was declared the mandatory challenger for Tyson Fury’s WBC belt, provided that Whyte would defeat Sweden’s Wallin in the main event of a card that still appears to be on, and which will take place in London’s O2 Arena and broadcasted by DAZN.

The cancellation means that Whyte will now have no further roadblocks on his path towards an eventually much more profitable match against Fury, provided that the Wallin fight be called off completely and that his injury heals properly in time for a showdown with the current Ring heavyweight champion down the road.

Wallin, however, released a statement indicating that he will be requesting Whyte’s injury to be considered grounds for a postponement and not a cancellation, pleading with both the promoter and the sanctioning body in charge of the fight to guarantee that the bout will be merely kicked down the road and not called off altogether. 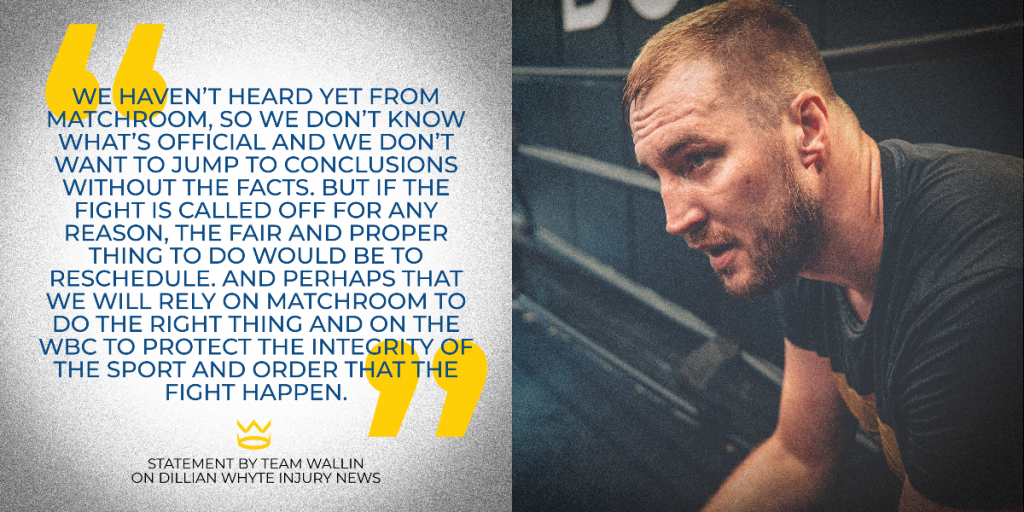 “We haven’t heard yet from Matchroom, so we don’t know what’s official and we don’t want to jump to conclusions without the facts,” said Wallin in a press release. “But if the fight is called off for any reason, the fair and proper thing to do would be to reschedule. And perhaps that we will rely on Matchroom to do the right thing and on the WBC to protect the integrity of the sport and order that the fight happen.”

DAZN: The card will go on as planned

In a press release later in the day, DAZN confirmed the injury and the cancellation, as well as the fact that the rest of the card will go on as planned.

The press release reads as follows:

A shoulder injury has forced Dillian Whyte to cancel his Interim WBC Heavyweight World Title defence against Sweden’s Otto Wallin scheduled for The O2 in London on Saturday October 30.

“I am devastated as I had a great camp, was in great shape, and had great sparring,” saidWhyte. “I was looking forward to knocking Wallin out and would have done so in the first half of the fight.

“I am devastated about not being able to fight on October 30 but I want to thank everyone for all of their support.”

Dillian Whyte’s Physician, and leading Sports & Exercise Medicine Consultant, Dr Harjinder Singh, said: “Dillian sustained a shoulder injury during training in preparation for his planned fight on October 30 2021, which I have assessed and confirmed with diagnostic imaging.

“I have treated the injury, but the injury will unfortunately prevent him from fighting on October 30 2021. With immediate rest, physiotherapy and rehabilitation there should be no enduring concerns.”

“Dillian carried this injury for the last couple of weeks but it worsened in sparring on Monday night and it was impossible for him to continue,” said Matchroom Sport Chairman Eddie Hearn. “It’s a huge shame because Dillian had a great camp before the injury and was ready to go. The show will continue on October 30 without Dillian and we wish him a speedy recovery and look forward to seeing him back in the ring very soon.”