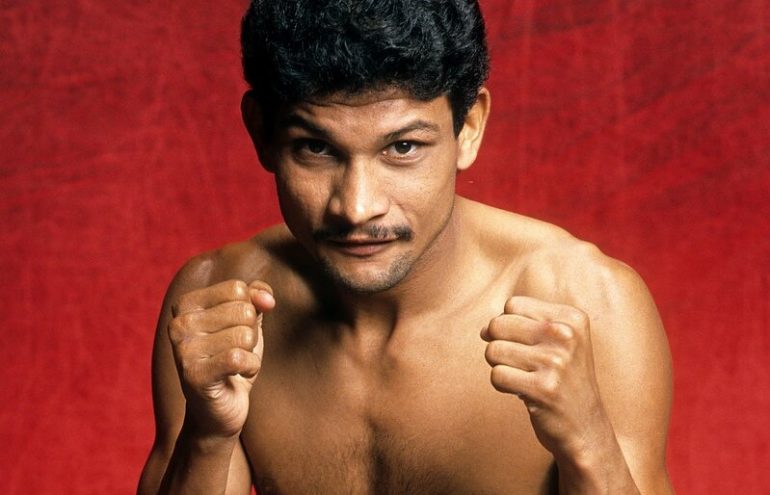 Highly underrated Antonio Esparragoza won the WBA title in the late 1980s and held the title for four-years. He almost always fought in his opponent’s backyard and showed his vaunted power en route to making seven successful defenses.

Esparragoza was born in Cumana, Venezuela on September 2, 1959. He was one of 14 children and despite a difficult start to life he enjoyed his childhood.

“All boxers grow up in exclusive neighborhoods,” Esparragoza told The Ring through Mauricio Gonzalez. “We grew up exclusive from water, from money, opportunities. I grew up in poverty and lack of opportunities.

“I lived close to the mountains, I liked to go and eat fruit, catch butterflies and watch the birds. There’s a lot of water out there so I’d go fishing. I played a lot of sports, basketball, soccer, volleyball. They always pushed me toward boxing. I have great memories from when I was a child.”

His father encouraged him to box and he went on to have a productive amateur career, winning gold at the 1978 and 1980 Box Am tournaments in Spain. The proud Venezuelan also won bronze at the 1978 World Championships in Belgrade, Yugoslavia. However, he was unable to win a medal at the 1980 Moscow Olympics, losing in the second round.

Esparragoza went 78-22 as an amateur.

Esparragoza turned professional against Anthony Wanza with a second-round knockout in his hometown in February 1981.

The rising star was stopped in his fifth fight by Angel Torres. Esparragoza got back to winning ways halting his next four opponents before he was matched with fellow Venezuelan amateur standout and Olympian Bernardo Pinango, who later won world titles at 118 and 122-pounds. The two couldn’t be separated on the scorecards and had to settle for a 10-round draw.

Esparragoza won nine consecutive fights before a 10-round draw with skilled Panamanian Bernardo Checa in October 1984.

Four wins followed including a third-round stoppage over talented Johnny De La Rosa in Aruba. He then stopped Checa in two-rounds in their rematch.

The big-puncher was well positioned for a shot at Barry McGuigan’s WBA title but had to wait.

“I was the No. 1 ranked [featherweight] for a year by the WBA,” he explained. “At that time, the No. 1 had to get an opportunity to fight for the title within nine-months. When the fight came up with either [Steve] Cruz or me, Barry’s camp took Cruz even though he wasn’t No. 1. He fought Cruz and Cruz beat him.”

In early 1987, Esparragoza made his American debut, scoring a third-round stoppage over Octavio Quinones in a stay busy fight and then he met Cruz in the defending titleholder’s hometown of Fort Worth in March 1987.

“It was a tough fight in Texas,” said Esparragoza, who stopped Cruz in Round 12. “Cruz had many fans, there were like seven of us versus 10,000 Cruz fans. I felt great with all my preparation for that fight. I went from Venezuela, to New York, Los Angeles and Texas. I felt that was one of my best preparations.” 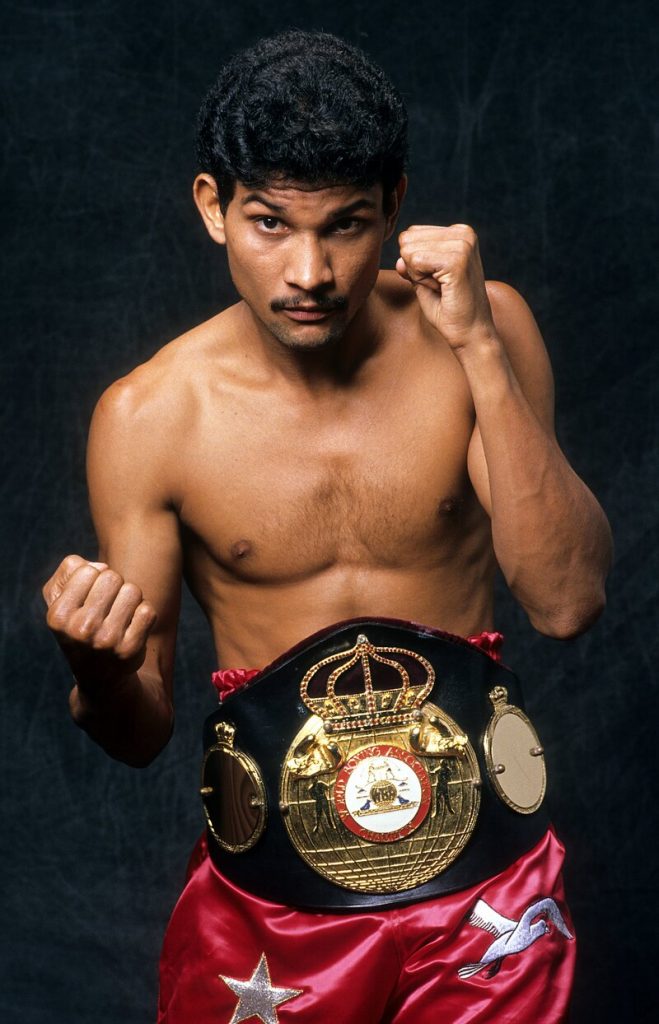 The new champion’s calling card was to defend his title on the road in the challenger’s backyard. He knocked out Pascual Aranda in front of the Houston native’s fans and then fought a savage 12-round draw with teak-tough Marcos Villasana.

“That fight was difficult,” he said. “[There was a] handful of Venezuelans and at least 10,000 Mexicans in L.A at the fight. They threw money into the ring, the ref told me, ‘All the money that came in is yours.’ It was their way of saying they enjoyed the fight.

“There was a lot of low blows in that fight, I was hit at least 30, 40 times below the belt to the point when I took of my shorts, there was blood all over. When I got back to Venezuela, I surgery because I’d been hit so much below the belt that it effected one of my testicles.”

When Esparragoza returned he faced Jose Marmolejo in Italy.

“I remember that fight so much because that was supposed to take place several times, in Belgium, Spain, in the U.S. and Marmolejo would cause issues, he didn’t want to fight,” recalled Esparragoza. “It was like he was the champion. Finally, when that fight came through, I had an Argentinean trainer, Amilcar Brusa and he told me, ‘This guy’s speed is very fast, but we’re going to punish him for all he’s put us through.’ We finally caught him in the eighth round and knocked him out. It was one of the more satisfying victories because of everything that had taken place before.

“I knocked him out so bad that when I saw him the next day at the airport, as we were leaving, I went to say, ‘Hello’ to him out of respect and when Marmolejo went to get up he almost fell back down. I told him to stay seated.”

After outpointing Chan Mok Park (UD 12) in South Korea, he returned and was out-hustled by the younger Young Kyun Park (UD 12).

Esparragoza decided to retire from boxing with a record of 30-2-4 (27 knockouts).

“I felt during that fight my drive had gone, the so-called. ‘Eye of the Tiger’ was missing so much so that I did not even feel like hitting him during the fight,” he said of his reason for retiring. “I knew that was it for me, I was offered four other lucrative fights but I did not want to fight any more.

“[Then WBA President] Gilberto Mendoza even called me and said you are ranked No. 3, one more fight and you can go for the title but again. I said, ‘The drive to fight was gone.'”

Bob Yalen, who worked for ABC in the 1980s, remembers a fight with Jeff Fenech was floated in the late 80s but Fenech broke his hand and the fight was not able to be made.

During his championship reign, Esparragoza was linked with several rival champions but for a myriad of reasons he was never able to secure a superfight.

“I did have an opportunity to fight Azumah Nelson,” he recalled. “Don King came to Venezuela and offered us a fight but the terms weren’t fair. I wanted to fight him but $2.5million was going to go to Azumah Nelson and $500,000 for me. I rejected it, I wanted 50-50. A couple of times there was talk of facing [Jorge] “Maromero” Paez but when I fought [Eduardo] Montoya, Paez went in the ring and challenged me but that fight never materialized.” 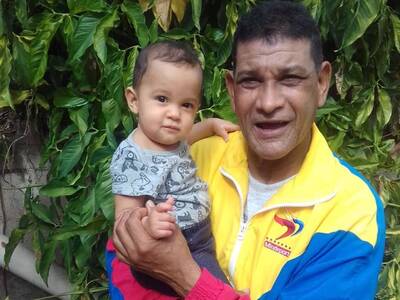 The former champion with his youngest grandson. Photo courtesy of Antonio Esparragoza

Esparragoza, now 62, still lives in Cumana. He is married, has three children and five grandchildren. Esparragoza is qualified lawyer and was the president of the Venezuelan boxing federation for four years. He is currently the president in his region of Sucre for over 850 various sporting facilities. His next goal is to be the Sports Minister for Venezuela.

“I also have aspirations to enter politics and take a strong role if the people want it,” he said. “I have a bigger responsibility now out of the ring than I did in the ring.”

BEST JAB
Steve Cruz: It was a strong consistent jab, always coming. I was able to figure it out to knock him out to win the fight.

BEST DEFENSE
Young Kyun Park: He was the toughest for me to hit. He was so unorthodox; he was definitely not the best boxer I faced. He kept on coming from weird angles, it was tough for me to find at times because his style was so awkward.

BEST HANDSPEED
Jose Marmolejo: I remember that guy was tough to find, he was so fast. Marmolejo’s speed was like Ernesto ‘Nato’ Marcel from Panama. He had great height and a long reach, taller and more reach than myself.

BEST FOOTWORK
Marmolejo: His speed and awkwardness was just tough to deal with but I was able to figure him out and take him out in eight rounds.

SMARTEST
Park: I tried to fight my fight but I could see the shifts he made in the fight. He was the smartest fighter I faced because of the way he would come at me and the different things he would do in the fight. The conditioning and intelligence he would try to use was probably the best.

STRONGEST
Jean-Marc Renard: I felt like I was a flyweight going in there. [He was] unbelievably strong, he was a big guy for the weight class. The blows would glance off him but when I was able to hit him in the mid-section, he winced and I saw the opportunity but he was physically strong.

BEST PUNCHER
Mitsuru Sugiya: Sugiya hit me in the fourth round and when people say you see stars they say it is a joke but I saw stars. I hung on to knock him out but that was definitely the hardest shot I was ever hit with.

BEST BOXING SKILLS
Bernardo Pinango: Pinango had unbelievable boxing skills. I fought Bernardo many times in the amateur ranks and his skill level was the best around. Every time we fought in the amateurs and pros it was a fight of the year candidate.

Mauricio Gonzalez helped coordinate and translate this feature. The Ring appreciated his assistance.