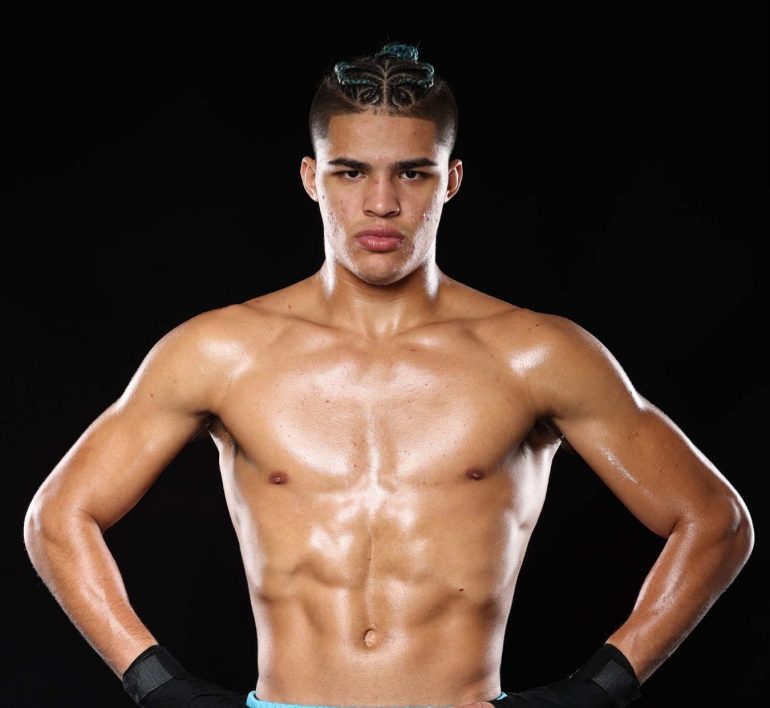 You get lost remembering that Xander Zayas is still just 19. The 5-foot-10 junior middleweight has the skills, the smile, the looks, to capture boxing stardom. But Zayas who will stop and remind you, that he is only 19. It’s Zayas who will remind you that he’s still honing his skills.

It’s Zayas who will remind you that his success is a group effort—a triumvirate of fathers, manager Peter Kahn, his trainer, Javiel Centeno and his father Orlando Garcia—creating a successful path.

Zayas (10-0, 7 knockouts) will be fighting sometime Saturday night in his ESPN debut on the Jamel Herring-Shakur Stevenson undercard from the State Farm Arena in Atlanta, and by the projection of the budding star’s career, he’ll probably win.

But he isn’t who he is, and he wouldn’t be where he is going without those around him.

“All three of the men in my life are super close to me, they’re like my best friends and I let them know everything,” Zayas said. “They’re with me through all times. Any questions that I have, I have three people that I can count on and three people who I can really trust.

“Every situation, we sit down as a team and we think about it. They always give me good advice. They will tell me ‘no, Xander’ and I understand it, because these are three people who are looking for the best for me. When they say they know, I know not to argue.”

“Peter has a son my age and he has some of the same interests I have and he’s a great part of me,” Zayas said. “I trust him. He treats me like his son. I feel comfortable with his family around, and he feels comfortable with my family around. Before we started working with each, we built that trust.

“Peter looks at me as his fourth son. When we first started looking for managers, my dad and I spoke with Javiel, and he knew Peter for over 20 years. Everything Javiel told us has come out to be true.” 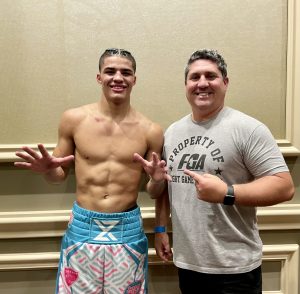 Xander Zayas with two-time BWAA Manager of the Year nominee Peter Kahn form a strong bond (Photo by Patrick Corley/Fight Game Advisors)Having his support system has made Zayas’ life as a young fighter that much more bearable. All he does is eat, sleep, train and fight.

Having his support system has made Zayas’ life as a young fighter that much more bearable. All he does is eat, sleep, train and fight.

“That’s because my support system takes care of everything else, which makes like easier for me,” Zayas said. “I know I can say, ‘Hey Peter, can you do this?’ ‘Hey Javiel, can you do that?’ ‘Hey pops, I need this.’ They take care of the little things and that allows to focus on only fighting. They work as one and they know that we’re here for one job and one job only—to make me one of the greatest boxers ever.”

Kahn, a two-time BWAA Manager of the Year nominee, has it easy, too, because Zayas isn’t someone his team is going to have to look for at 2 a.m.

“Trust is everything, and it’s everything that goes into every single fighter I have, and my fighter’s belief in me is what drives me,” Kahn said. “If you do the right things by your fighters, the one thing you know is that they’ll trust you back.

“I don’t say yes to everyone. Once I see the fighter and their team core, that tells me a lot. It starts with the right support system at home and who the fighters have around them. I’ve parted ways with undefeated fighters with great amateur pedigree, and either you follow my way, or you don’t.

“Xander is easy, because he wants to fight and he wants to be great. You don’t have to track him down and worry where he is and what he is going to do. He’s a really mature young man who knows the kind of future he has in front of him. Javiel and Orlando are great to work with because they’re straight shooters. Everyone says what is on their mind and there is mutual respect all around for each other and our respective roles on this team.”

Zayas is scheduled to fight Dan Karpency (9-3-1, 4 KOs) in a six-round bout, scheduled as the co-main event under Herring-Stevenson. Karpency has not fought since February 2020 and is 1-1-1 over his last three fights.

But this will be Zayas’ fifth fight this year, and he’s looking to get another one in before 2021 ends.

“I know this guy is coming to fight and commits a lot of mistakes, and leads with his head too much, and there are some things to make him pay for his mistakes,” Zayas said. “I’m ready to show the world that I want to win Prospect of the Year for 2021 and this fight will show it. It’s my ESPN debut and I’m excited about this.”