Camden Honors the legendary Jersey Joe Walcott with a statue 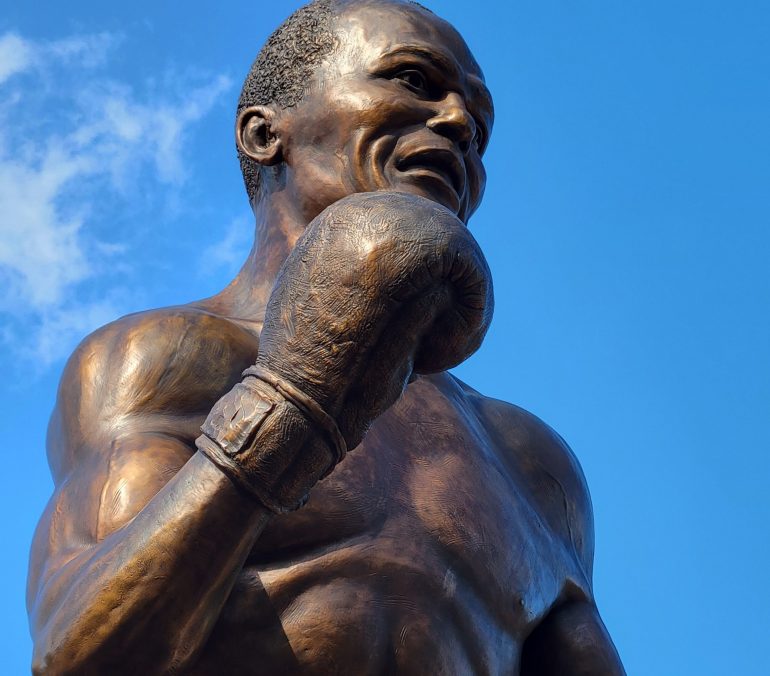 Ruth Cream reached for a tissue to dab the tear falling down her left cheek. It had been close to three decades since she last saw her father, Hall of Fame former heavyweight champion Arnold Cream (known by the sobriquet Jersey Joe Walcott), alive.

Yet, Cream, 82, kept looking up because at any moment her dad was going to step down from the five-foot high pedestal he was immortalized on the Camden, New Jersey, waterfront and give her a hug. 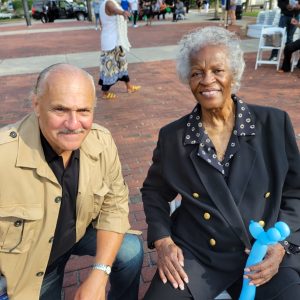 Camden County Historical Society, along with the county’s Board of Commissioners, made sure the legacy remained of one of the more underappreciated all-time greats by unveiling an 8-foot tall bronze statue of the Camden County native.

“I miss him so much, I feel like any moment my dad is going to come down here,” said Cream, who hosted a group of reporters in their Pennsauken, New Jersey, home the night of July 18, 1951, when her father stopped Ezzard Charles in the seventh round to win the heavyweight championship. “This is great, but it’s extremely hard, because it’s almost like he’s alive. I have tears, and I am happy, but I miss him so much.

“I was a little girl. I was 12 when my dad won the heavyweight title and there he is, so real. I remember that night like it happened clearly, I was the only one downstairs at our house with reporters in our living room watching the fight on TV. Everyone else was upstairs in bed, because they didn’t want to watch it.

“After my father won, I remember running up the stairs to tell my family, ‘Daddy won!’” 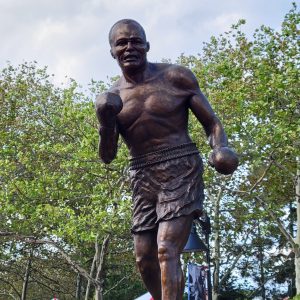 He won the heavyweight championship—finally on his fifth try, in 1951—though many boxing historians feel his chance in the sun should have come four years earlier.

Many believed Walcott won, but the judges declared Louis the winner in a 15-round decision. Four years later, at age 37, Walcott became the oldest man at that time to win a heavyweight championship fight, defeating Charles. His record stood until 1994 when George Foreman won the title at age 45.

The project was 10 years in the works, and it took sculptor Carl LeVotch 18 months to put the amazing piece of art together. LeVotch consulted with the family and he asked them how they would like to remember him. They wanted to see Walcott after he knocked Louis down for the first time in their first fight.

In 2019, LeVotch was commissioned by the Walcott Committee and the Camden County Board of Commissioners.

“When I unveiled it to the family on Monday, before anyone could see it, the family was in tears,” LeVotch said. “That told me I did a good job. I’m touched by the turnout and how people have embraced the art. Jersey Joe Walcott was an artist.”

Vincent Cream, Walcott’s grandson and Ruth’s nephew, spearheaded the cause for a Walcott statue.

“I was fortunate enough to see the statue early at the installation process, and I wanted to make sure I was composed today,” said Vincent, 61. “It was still an overwhelming moment. Everyone who never met my grandfather met him today.

“No one ever dies. He’s here with us. When I look at his statue, and you see who’s gathered around here, white, black, old, young, everyone coming together, his timelessness has come. To persevere for 23 years, it represents who my grandfather was as a man and his fortitude as a person.

“When you have a dream, it’s important to set goals between the dream and the achievement. If you think you can eat an elephant in one bite, you can wake up and accomplish your dream. But that’s not the reality. Every time I brought up the idea of a statue, people would tell me ‘Good luck with that.’ That was 10 years ago. We achieved it, a little at a time—like my grandfather.

“When the planes fly over and see William Penn across the river in Philadelphia, they can look over here and see a statue of my grandfather and know that’s Jersey Joe Walcott.”