Savannah Marshall ready for ‘tough test’ and for Claressa Shields 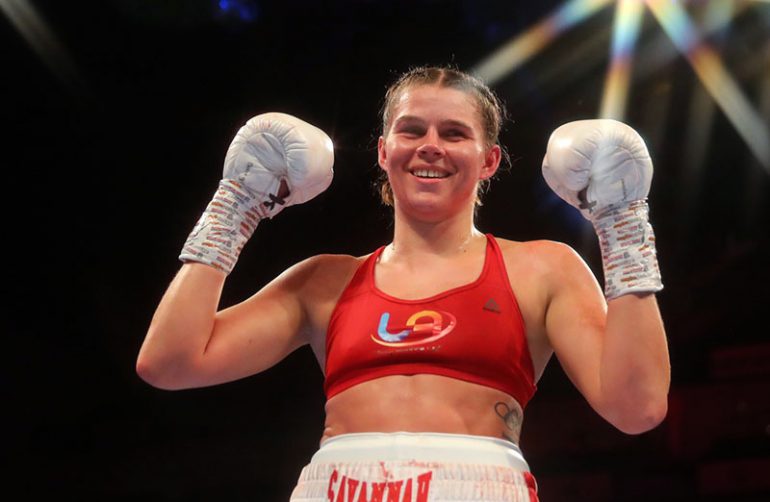 Talented boxer-puncher Savannah Marshall will put her WBO middleweight title on the line for the second time against unbeaten Lolita Muzeya at the Newcastle Arena in Newcastle, England on Saturday.

Marshall, who is rated No. 1 by The Ring at 160 pounds, behind champion Claressa Shields, isn’t taking her little-known opponent for granted.

“I think it’s a tough test, she’s never been beaten,” Marshall (10-0, 8 knockouts) told The Ring. “She’s a typical African, tough, comes to win, looks like you can hit her with the kitchen sink and she’ll still be coming forward. She’s a big puncher, she’s a big girl, in height, she’s my size.

“She’s never boxed outside of Africa so there’s not a great deal of footage on her. It is a step [up for her] but you can’t leave that to chance.”

It’s been a particularly long training camp for Marshall, who has been in Cheshire under the watchful eye of esteemed coach Peter Fury.

“This has been a tough 16-18 weeks for me,” she explained. “It’s been tough because I’ve done two back-to-back camps, with a week off in-between. I was due to fight on August 14 in Eddie Hearn’s Fight Camp and that fight literally got pulled weeks before.”

Marshall, who is nicknamed “The Silent Assassin”, won her title in October 2020 against Hannah Rankin (TKO 7) and turned back Maria Lindberg (TKO 3) in her first defense.

Not only will this fight be her first defense in front of live crowd but it is the first in her home region of the North East.

“It’s a chance for my family, friends and all my loved one’s to come and watch,” she said. “It’s lovely because the one’s close to me have seen what I’ve been through and I want them to share this moment with me.”

Although the 30-year-old from Hartlepool is focused on Muzeya, there is a lot of talk about her potentially facing highly touted American Claressa Shields.

The two ladies have back history, Marshall, who spent nine years on Team GB, is the only woman to have ever defeated the popular American. Marshall, who went 103-15 as an amateur, bested Shields 14:8 at the 2012 World Championships in Qinhuangdao, China.

“That’s the biggest fight out there for me,” she acknowledges, though says that’s not the only fight on her radar. “But I’m not in a position to wait about for Claressa, when the times right the fight will be there for her to take, if she doesn’t want it then I’d look at other options.

“The other options would be the two super middleweights [WBA and IBF] Elin Cederroos and [WBC and WBO] Franchon Crews-Dezurn. They have two belts each and they’re fighting for The Ring Magazine belt soon. I’d like to have a crack at the winner of them.”

Muzeya (16-0, 8 KOs) turned professional in 2013. The 30-year-old from Zambia has fought exclusively in his home region and will be fighting outside of Africa for the first time to date. She will be moving up in weight having previously campaigned at welterweight.

Marshall-Muzeya, plus bouts involving Hughie Fury and Chris Eubank Jr., will be broadcast exclusively on Sky Sports in the U.K.