Manny Pacquiao confirms retirement from boxing: I have just heard the final bell 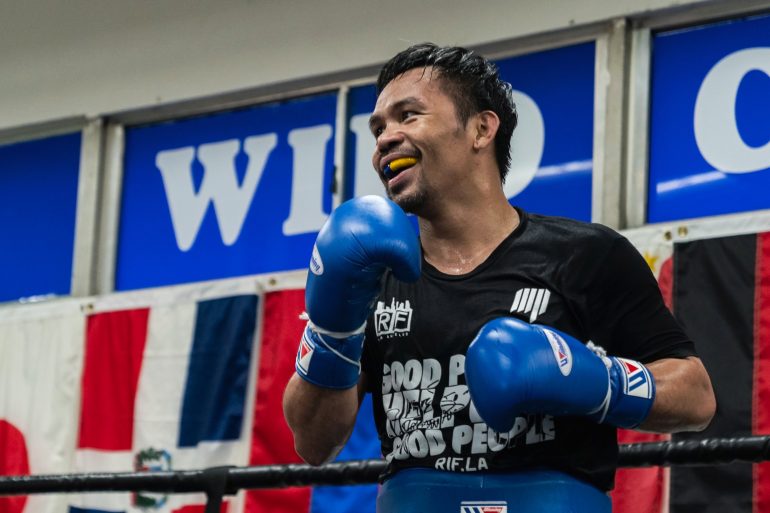 Manny Pacquiao made his retirement official Wednesday, cementing his plans in a video posted to his social media accounts.

“Goodbye, boxing. Thank you for changing my life. You gave me the chance to find a way out of poverty. Because of you, I was able to inspire people all over the world. Because of you, I have been given the courage to change more life,” Pacquiao (62-8-2, 39 knockouts), one of the sport’s greatest boxers ever, said in a 14-minute video titled “Good bye boxing.”

“I will never forget what I have done and accomplished in my life. I can’t imagine that I have just heard the final bell.”

The only 8-division champion in boxing history, who turns 43 in December, is coming off a unanimous decision loss to late replacement Yordenis Ugas last month. It was his first fight in over two years, since his thrilling split decision win over the previously unbeaten Keith Thurman.

Pacquiao, the first term senator and a former member of the House of Representatives in his native Philippines, announced earlier this month he would be running for the Philippine presidency as the nominee of his political party, PDP Laban.

Pacquiao, who made the small fishing town of General Santos City, Philippines a household location in boxing circles, turned professional in 1995 and won his first world title, the WBC flyweight belt, in 1998 with an eighth round knockout of Chatchai Sasakul in Thailand.

He later won world titles at from 122 pounds to 154 pounds, defeating the likes of Marco Antonio Barrera, Juan Manuel Marquez, Erik Morales, Miguel Cotto, Oscar de la Hoya and many others. His future as an International Boxing Hall of Fame inductee is a foregone conclusion; it’s likely that a fighter could have been inducted separately for his career at 130 and below, and 130 pounds and above.

Among his career highlights was taking part in the massive 2015 showdown with Floyd Mayweather Jr. The bout, which was several years in the making due to on-and-off negotiations, generated a record 4.6 million pay-per-view buys. Pacquiao lost a unanimous decision in the bout, citing a right shoulder injury.

“Even me, I’m amazed at what I have done,” Pacquiao said. “The only boxer to hold world titles in four different decades and became the oldest boxer to win a world welterweight title, an amazing accomplishment.”

While Pacquiao had been well known on the Asian circuit, he was a complete unknown when he stepped in on short notice to replace the injured Enrique Sanchez against IBF junior featherweight titleholder Lehlohonolo Ledwaba on the Oscar de la Hoya vs. Javier Castillejo undercard in 2001.

Pacquiao, with an upstart trainer named Freddie Roach in his corner, blitzed the better known Ledwaba before sending him crashing to the canvas in the sixth. Roach was inducted into the International Boxing Hall of Fame in 2012, due in large part to his accomplishments with Pacquiao.

This is not the first time Pacquiao has announced his retirement. Prior to running for the senate in 2016, Pacquiao said his third bout against Timothy Bradley Jr. would be his final bout. He won the seat, and fought later that year, outpointing Jessie Vargas.

“It is difficult for me to accept that my time as a boxer is over,” Pacquiao said. “Today, I am announcing my retirement. I never thought that this day would come. As I hang up my boxing gloves, I would like to thank the whole world, especially the Filipino people, for supporting Manny Pacquiao.”