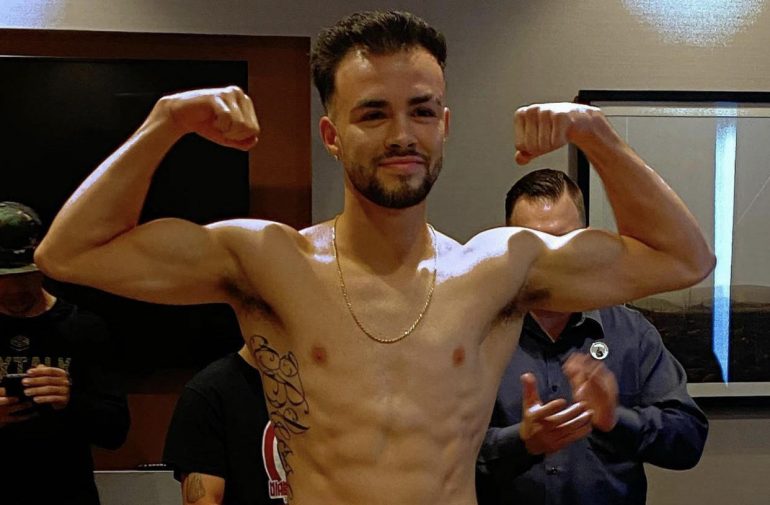 A possible future champion has a message for all of boxing’s major promoters: “Sign me!’

Flyweight prospect Anthony Clark made his case for signing with a top company following his second-round knockout of Jose Rodriguez Montemayor Saturday evening in Phoenix, Arizona.

Clark (14-0, 9 knockouts), who was born in Yuma, Arizona, but now resides in the neighboring city of San Luis, confirmed those reports in an interview with The Ring.

“It was such a great experience to spar one of the legends of the sport,” he stated of Gonzalez. “I also had the opportunity to spar the likes of Julio Cesar Martinez, Elwin Soto, and recently [Angel] Tito Acosta.

“To be able to hang in there with them for eight rounds and be able to bob and weave their punches and catch them when they make mistakes, it goes to show that my coaches are doing one hell of a job.”

The 21-year-old said that Gonzalez (50-3, 41 KOs), who has won world titles at strawweight, junior flyweight, flyweight, and junior bantamweight, including The Ring Magazine 112-pound world championship, was the most surprised by his boxing abilities.

“I provided a better showcase against ‘Chocolatito’ than I did against Martinez,” he said. “I was able to move around the ring and use my angles and my head movement, and I was able to counter more effectively against him than Martinez.

“My hard work and dedication has been paying off. We’ve been working for this for 13 years now, going on 14. Sometimes I still don’t believe that I’m living my dream.”

Clark wants to add his name to the list of the few and the proud, but he needs an opportunity.

“I was a fan of many fighters, but the one I mainly grew up watching was Oscar De La Hoya,” Clark said. “Reason being is because he was Mexican-American. All of the ladies loved him, and my mom was in love with him as well, so when I was a kid, I would watch Oscar fights with my mom.”

“My selling point to Golden Boy is that not only am I an excellent investment as a fighter, but I’m also an even better investment as a person. I respect the sport, and I respect anyone who steps into that ring. Everyone says that; I know, but we’re fighting for the people.

“I’m not the type of guy to talk smack at press conferences or take insults against another fighter’s family. Our kids are going to see that and our loved ones. May the best man win, but we need to raise the bar, not lower it. God above all.”

Clark also said that he is interested in signing with Eddie Hearn’s Matchroom Sport considering the promoter’s investment in boxers in and around his weight division. The promoter is currently working on staging the trilogy between unified and Ring junior bantamweight champion Juan Francisco Estrada and Ring No.2-ranked contender, the aforementioned Gonzalez.

“I made a statement with my win. I know I have to make a good first impression to get other promoters to pay attention to me. [Matchroom] is certainly another one that piques my interest. I want a step-up fight.”