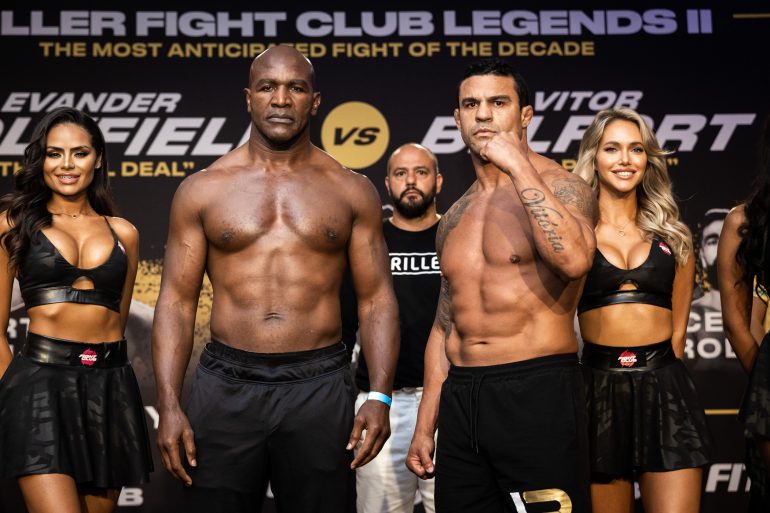 Evander Holyfield’s first competitive boxing match in a decade was just as sad as people feared it would be.

The bout, which headlined a pay-per-view card produced by Triller Fight Club, was stopped at the 1:49 mark of the first round of the scheduled eight rounder, with Holyfield still standing but offering little resistance. Holyfield was rocked by an overhand left from the Brazilian fighter less than a minute into the action. Holyfield fell through the ropes while attempting a left hook, though it was not counted as a knockdown.

Vitor Belfort tko's Holyfield in the first round. Honestly, sad to watch though. Holyfield shouldn't have been in there. #holyfieldbelfort pic.twitter.com/nR34paZsCD

Belfort would put Holyfield on the canvas moments later after a left uppercut cracked Holyfield through the guard. Holyfield rose up but was battered more by the 44-year-old southpaw before the referee stopped the bout.

It was a sad sight for Holyfield (44-10-2, 29 knockouts), a former undisputed cruiserweight and heavyweight champion, and the sport’s only four-time heavyweight titleholder. Holyfield’s last sanctioned bout was in 2011, when he stopped Brian Nielsen in ten rounds in Denmark.

If this bout were to count as an official pro fight, it would be the third time Holyfield was knocked out. The other two occasions were in his third bout with Riddick Bowe in 1995, and his loss to James Toney in 2003.

Belfort, a former UFC light heavyweight champion, was last in a competitive fight in 2018, when he was knocked out in two rounds by Lyoto Machida at UFC 224. He has one pro boxing match to his credit, a knockout win over Josemario Neves in 1996, shortly before he made his pro debut as a mixed martial arts fighter.

Holyfield had replaced another boxing legend, Oscar de la Hoya, as Belfort’s opponent after de la Hoya withdrew from the bout after being hospitalized due to COVID-19.

The event was originally slated to take place in California but was moved to Florida after California, which had refused to allow Holyfield to enter the ring, even if the bout was only an exhibition.

Belfort concluded his night by calling out his next preferred opponent for what he describes as a $25 million, winner-take-all fight.

“Hey, Jake Paul, stop running from me,” said Belfort, referring to the Youtuber turned pro boxer. “I’m gonna teach you a lesson. You can be my kid. You’re gonna meet daddy over here.”

The co-main event also featured a couple of 40-plus fighting stars in a quick blowout.

Anderson Silva made quick work of his fellow former UFC star Tito Ortiz, knocking out “The Huntington Beach Bad Boy” cold at 1:21 of the first round. Ortiz was left vulnerable while cornering Silva, throwing mostly arm punches before Silva burst out with counter punches, landing hard with a pair of right hands before a left hook sent the anti-mask activist face down on the canvas.

Both Silva and Ortiz are 46 years old.