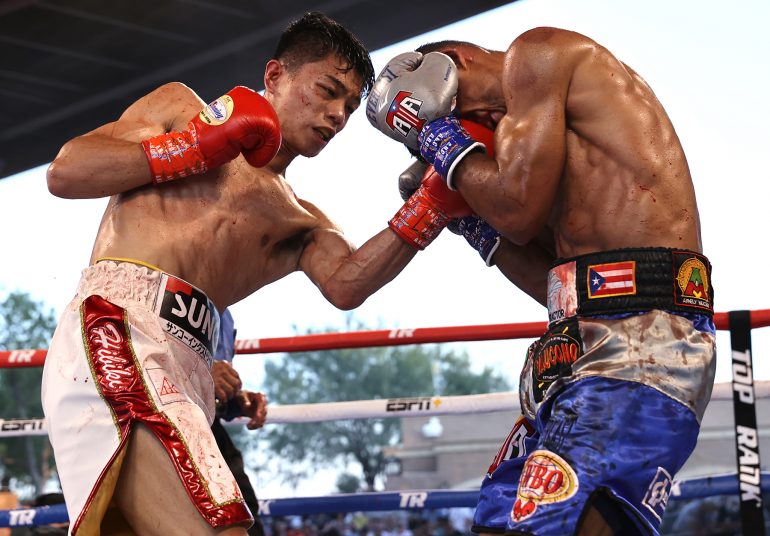 They were fighting on the undercard of the fight between junior lightweight world titlist Oscar Valdez and Robson Conceicao and many thought it might steal the show. However, it was short-circuited because Acosta was deemed unable to continue due to the excessive blood coming from an apparent broken nose.

Nakatani, who was making his first title defense and fighting outside of his home country of Japan for the first time, had a strong first round as he landed a sharp straight left hand that rocked the Miguel Cotto-promoted Acosta (22-3, 21 KOs), 30, of Puerto Rico. By the end of the round Acosta’s nose was a bloody mess.

“I caught him in the first round right in the nose and I was able to use my pace to fight him, so that worked out really well,” Nakatani said through and interpreter. “I knew (I had broken his nose).

The 23-year-old Nakatani (22-0, 17 KOs) continued the attack in the second round as Acosta’s nose continued to bleed profusely, forcing referee Rocky Burke to call a timeout and have the ringside doctor examine it with a little over a minute left in the round.

The fight was allowed to continue, and Acosta certainly seemed to feel the urgency as he went after Nakatani with abandon because it appeared as though the fight could be stopped at any moment due to the extreme amount of blood.

Former WBO junior flyweight titleholder Acosta, his face covered in blood, made it through the round and the corner went to work on his nose, but the flow of blood could not be completely stopped, and as soon as he took a shot in the third round it was flowing freely again. Burke called another timeout to have the nose examined, and again the fight was allowed to continue.

The MASSIVE left hand from Junto Nakatani that got the blood flowing out of Acosta’s nose. 😬😬#ValdezConceicao | Undercard on ESPN+ pic.twitter.com/B5zEIz2Q0n

In the corner after the third round, the ringside doctor said that if his nose continued to bleed the fight would have to be stopped because of how much blood Acosta was losing. He asked for one more round, and came out for the fourth, but when the blood continued to flow, Burke stepped in and waved it off at 32 seconds on the advice of the ringside doctor.

“I thought it was a good win,” Nakatani said. “I want to unify the titles.”

Nakatani and Acosta were scheduled to fight on May 29 in Osaka, Japan, but it was postponed because of the state of emergency in there due to the coronavirus pandemic.

Then there were issues rescheduling the fight and a June 1 purse bid was scheduled, but before the purse bid was held Nakatani promoter Teiken Boxing and Acosta promoter Golden Boy made a deal. However, due to travel restrictions that prevented Acosta from entering Japan, Top Rank, which is close to Teiken Boxing, agreed to help by putting the fight on the Valdez- Conceicao card.

Hot prospect Xander Zayas fought as junior middleweight for the first time and won a hard-fought but shutout decision against Jose Luis Sanchez.

“The heat got to me a little bit in the later rounds. We knew it would be hot here in Arizona,” Zayas said of the outdoor bout. “We also knew that Sanchez was a tough opponent. He comes from a tough fighting family, and he’s a proud Mexican warrior. I knew he was coming to fight. We did the job. I listened to my corner, boxed him, and got the unanimous decision. That’s the most important thing.”

✅ 10-0 overall
✅ UD victory right after turning 19
✅ Now 4-0 in crucial 2021 Prospect of the Year pursuit@XanderZayas gets. it. done.#ValdezConceicao | Undercard on ESPN+ pic.twitter.com/KlOQvgho3S

Sanchez’s left eye began to swell in the second round. In the third round, Zayas laid a beating on Sanchez. He nailed him with numerous clean punches, including uppercuts and right hands. But it was a clean left hook than landed directly on the chin to knock him down. However, referee Rocky Burke missed it and called it a slip. It was obviously a knockdown on the video replay but the commission does not employ to review questionable calls.

Zayas (10-0, 7 KOs), 19, a Puerto Rican from Sunrise, Florida, had Sanchez (11-2-1, 4 KOs), 28, of Albuquerque, New Mexico, reeling early in the sixth round after hammering him with right hands. Sanchez took many more shots, including yet another uppercut and a left to the body, and in the final minute, Zayas landed a combination that left Sanchez with a bloody nose.

Assuming Zayas came out of the fight with no injuries, Top Rank is hoping to next have him fight on the Jamel Herring-Shakur Stevenson undercard in Atlanta on Oct. 23.

Junior welterweight prospect Lindolfo Delgado, a 2016 Mexican Olympian, had his second bout in 83 days since signing with Top Rank and absolutely mauled an overmatched Miguel Zamudio in a second-round knockout victory in their scheduled eight-rounder.

Delgado (13-0, 12 KOs), 26, was merciless as he pounded Zamudio (45-17-1, 28 KOs), 30, of Mexico, from pillar to post through the fight. He spent almost the entire first round teeing off on Zamudio as he landed every shot in his arsenal. Zamudio’s only reprieve was brief break when Delgado was warned for hitting him below the belt by referee Robert Velez.

Delgado, who made his Top Rank debut on June 19 to end a 21-month layoff caused by promotional issues and the coronavirus pandemic, continued to pound the game Zamudio in the second round before dropping him with a right uppercut-right hand combination. He beat the count but it was very obvious the fight was just about over. Moments later, as Delgado began to tee off on him again, Valdez intervened and waved off the fight at 50 seconds.

Lightweight Rene Tellez Giron took it to Eduardo Garza in a one-sided seventh-round knockout in their scheduled eight-round bout.

Tellez Giron (16-1, 10 KOs), 22, of Mexico, who is best known for his upset sixth-round knockout of 2016 U.S. Olympian Karlos Balderas in December 2019 and has only lost by eight-round unanimous decision to rising lightweight contender Michel Rivera in June 2019, was in his first fight since signing with Top Rank.

Both fighters had their moments, but it was Tellez Giron who forced the pace, dictated the action and dominated the fight from the second round on. He regularly maneuvered Garza into the ropes and ripped combinations, uppercuts and body shots that often found their mark.

Early in the seventh round, Tellez Giron landed a digging left hook to the liver that crumpled Garza (15-5-1, 8 KOs), 32, of Mission, Texas, to the mat in agony. He rolled over and got to all fours but was frozen in place and referee Rocky Burke counted him out at 44 seconds.

Just as the first round was coming to an end, Aguilar landed a combination, including a hard right hand that second Portillo to the canvas, but the round then ended. But Aguilar was all over Portillo in the second round. He landed a left hook that dropped him to all fours and moments later landed two left hands, including one that caught Portillo under the right eye, which immediately began to swell, to drop him for the third time. Portillo was pawing at his eye on his knees as referee Tony Zaino counted him out at 55 seconds.