Oscar De La Hoya is out of Sept. 11 date vs. Vitor Belfort due to contracting COVID-19 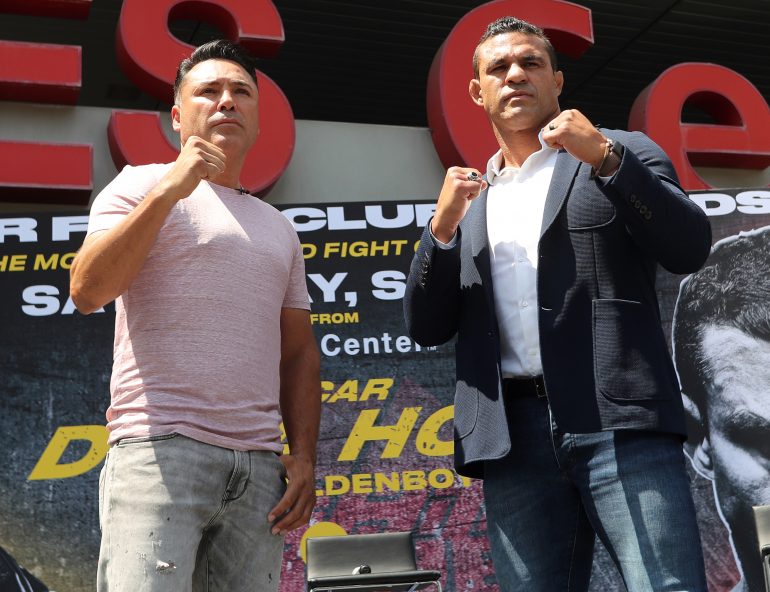 International Boxing Hall of Famer Oscar De La Hoya’s exit from 13 years in retirement will have to wait.

De La Hoya has been ill for the past few days – with Covid-19, a source told The Ring and confirmed later by De La Hoya – and has been forced to pull out of his fight with MMA legend Vitor Belfort.

De La Hoya and Belfort were scheduled to fight in the main event of a Triller Fight Club pay-per-view card on Sept. 11 at Staples Center in De La Hoya’s hometown of Los Angeles.

But now De La Hoya, who was vaccinated this past spring, is in the hospital with a fever.

“Wanted you to hear directly from me that despite being fully vaccinated, I have contracted Covid and am not going to be able to fight next weekend,” De La Hoya wrote on Twitter. “Preparing for this comeback has been everything to me over the last months & I want to thank everyone for their tremendous support.

Wanted you to hear directly from me that despite being fully vaccinated, I have contracted Covid and am not going to be able to fight next weekend. Preparing for this comeback has been everything to me over the last months, & I want to thank everyone for their tremendous support. pic.twitter.com/0wKEnr5Jzv

“I am currently in the hospital getting treatment and am confident I will be back in the ring before the year is up. God bless everyone and stay safe.”

The fight was supposed to be an official eight-round official boxing match, but one in which the rounds would be two minutes in duration instead of the usual three and at a contract limit of 185 pounds to accommodate the bigger Belfort, even though De La Hoya had never boxed above 160 pounds.

With De La Hoya out of the fight, Triller has been calling around seeking a new opponent to replace him against Belfort.

One of the fighters Triller made an offer to on Thursday night was four-time heavyweight champion Evander Holyfield, a source with knowledge of the offer told The Ring.

Holyfield has been in a dispute with Triller because he is under contract with the company to fight fellow Mike Tyson conqueror Kevin McBride in an exhibition bout, but it has been postponed multiple times with Triller not having committed to rescheduling it. Because of that, Holyfield this week filed a demand for arbitration, claiming breach of contract in an effort to get the more than $5 million he claims he is owed for the fight, multiple sources told The Ring.

If he winds up facing Belfort, it would likely be a way for Triller and Holyfield to work out the dispute, although it remains to be seen if the California State Athletic Commission would agree to sanction the match.

The 58-year-old Holyfield (44-10-2, 29 KOs), the only four-time heavyweight titleholder in boxing history, has not has fought since stopping Brian Nielsen in the 10th round in his home country of Denmark in May 2011, although he has been training for months in anticipation of facing McBride.

The 48-year-old De La Hoya (39-6, 30 KOs), 48, who won world titles in six weight classes from junior lightweight to middleweight and was the biggest boxing star of his time, has been out of the ring since he was stopped in the eighth round of a one-sided major upset loss to Manny Pacquiao in a 2008 welterweight fight. 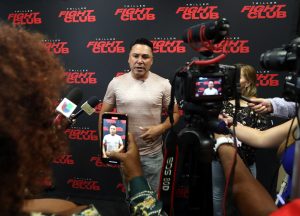 Oscar De La Hoya held court with the media prior to the kick-off press conference for his September 11 showdown with Vitor Belfort at the Staples Center in L.A. Photo by Chris Farina / Triller Fight Club

De La Hoya, however, has been talking about a comeback for quite some time and been training for months before finally making the fight with Belfort official this past spring.

The 44-year-old Belfort, a southpaw from Brazil, is a former UFC light heavyweight champion who has faced many top MMA opponents. He has had one previous boxing match, a first-round knockout win in Brazil in 2006.

If the card does go forward, the pay-per-view is also slated to include an eight-round cruiserweight boxing match between Anderson Silva and Tito Ortiz, two of MMA’s most famous fighters; an eight-round heavyweight exhibition bout between former heavyweight titleholder and cruiserweight champ David Haye (28-4, 26 KOs), 40, of England, who hasn’t fought since 2018, and his friend and countryman Joe Fournier (9-0, 9 KOs), 38, a fitness industry billionaire and novice boxer; and junior lightweights Andy Vences (23-2-1, 12 KOs), 30, of San Jose, California, against former world title challenger Jono Carroll (19-2-1, 5 KOs), 29, of Ireland, in a 10-rounder.