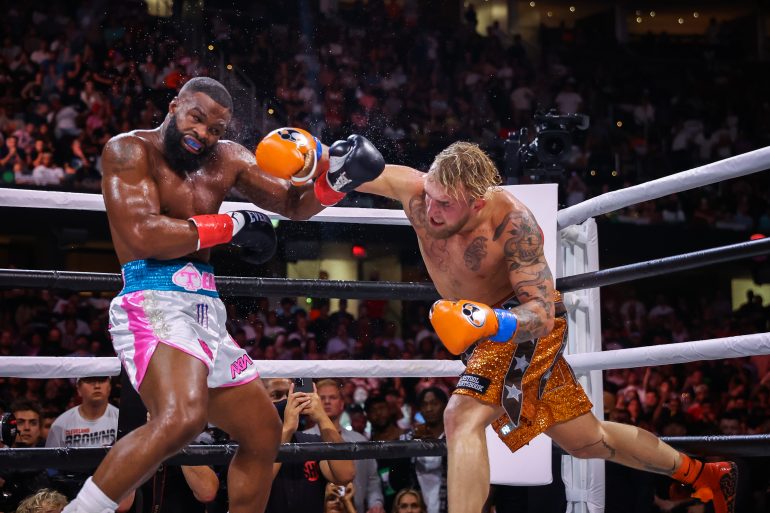 It was supposed to be a celebrated homecoming. It turned into a boofest. By the second round of the hyped Jake Paul-Tyron Woodley boxing match, the announced crowd of 16,000 that filled Cleveland’s Rocket Mortgage FieldHouse Sunday night were booing the fighters.

Paul (4-0, 3 knockouts) remained undefeated, though it’s the first time he went the distance in the YouTuber’s budding boxing career, beating Woodley by eight-round, split-decision in their cruiserweight bout, winning the scorecards of Dana DePaolo (78-74) and Jaime Garayua (77-75), while judge Phil Rogers scored it for Woodley, 77-75.

A week ago, sort of tongue-in-cheek, Paul, 24, from nearby Westlake, Ohio, who calls Cleveland home, had announced a wish list that included The Ring and the world’s No. 1 pound-for-pound fighter Canelo Alvarez.

He may need to reconsider after struggling with a 39-year-old former MMA fighter who was boxing for the first time after losing his previous four UFC fights.

“He’s a tough opponent,” Paul told the crowd about Woodley during his in-ring post-fight interview. “He’s been boxing, fighting, whatever you wanna call it, for several years. I’ve been doing this for three years. It was a tougher fight than I expected. My legs felt weird in the locker room. I don’t know what was wrong with me, but he’s a tough opponent. All respect to Tyron. You know, he’s a Hall-of-Famer. He put up a good fight. He’s a good boxer. He came in shape. I have nothing but respect for him. There was a lot of s–t talk back and forth.”

If anyone came out a winner, it may have been Woodley, who held up well, considering he was supposed to be splashed in his pro debut by the taller, bigger, younger Paul. Woodley, apparently, defied what the expectation was. Woodley did think he won, and he had an argument.

Otherwise, the exhibition served as a blatant portrait of where Paul is in his development as a novice boxer and how much further he needs to go if he ever thinks he would ever step into the ring with the likes of a Canelo Alvarez, who might have beaten down both Paul and Woodley in the same ring Sunday night.

Now, that may not have garnered the kind of boos Paul-Woodley did.

As for the real fighters on the card, Amanda Serrano (41-1-1, 30 KOs) looked incredibly impressive in a 10-round unanimous decision over the hesitant WBC junior featherweight titlist Yamileth Mercado (18-3, 5 KOs) to retain the WBC and WBO featherweight titles. 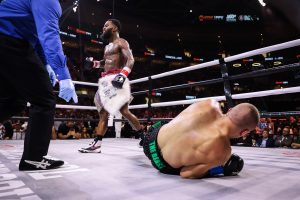 Montana Love pulled off a shocker by stopping Ivan Baranchyk in seven (Photo by Amanda Westcott/Showtime).

In a semi-shocker, light-fisted Montana Love (16-0, 8 KOs) stopped Ivan Baranchyk (20-3, 13 KOs) in seven rounds. It marked the second-straight stoppage loss for Baranchyk, who was one half of the universal 2020 Fight of the Year with Jose Zepeda. Baranchyk, 28, may need to rethink about his future in the sport.