Jake Paul is brilliant, whether you like him or not 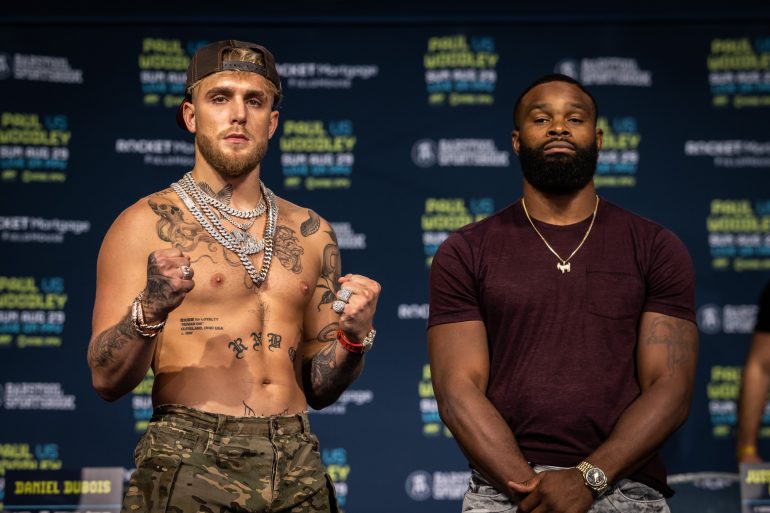 Love him. Hate him. Embrace him. Annoyed by him. Choke on the mere mention of his name. Scoff at his spelling and his aversion for vowels.

As long as you’re talking about him. Many, apparently, are. FOX and TMZ video his every move, it seems. ESPN has a crew following him.

Paul describes himself as a renowned content creator, more known among the young cell phone-addicted as a YouTuber and internet personality—and now he’s obviously added professional boxing to his list of schticks.

He has billions upon billions of twitter followers and social media devotees. This Sunday, he’ll be taking on former UFC champion 39-year-old Tyron “The Chosen One” Woodley, who has lost his last four mixed martial arts fight, at the Rocket Mortgage FieldHouse in Cleveland, Ohio, to headline the SHOWTIME pay-per-view (8 p.m. ET/5 p.m. PT). 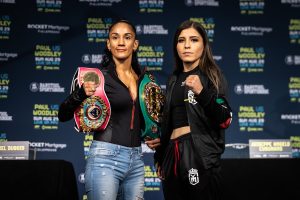 Real fighters like Amanda Serrano and Yamileth Mercado will be on the Paul-Woodley undercard (Photo by Showtime/Amanda Westcott).

Ivan Baranchyk, one half of The Ring and BWAA 2020 Fight of the Year (with Jose Zepeda) returns to take on unbeaten Cleveland-native Montana Love in a 10-round junior welterweight bout, while British heavyweight Daniel “Dynamite” Dubois continues to bounce back from his 10-round TKO loss to Joe Joyce in Nov. 2020 against Joe Cusumano in a 10-round fight.

And Cleveland-native and 2016 U.S. Olympian Charles Conwell will take on Juan Carlos Rubio in a 10-round junior middleweight tilt in a battle of unbeatens.

But Paul is the headliner—for better or worse.

Many on the boxing community say it’s worse. Those in the mainstream say it’s better.

Paul does not care.

You’re talking about him and that’s all that matters to him.

He can come off like Vanilla Ice in boxing gloves.

“This card is filled with fighters who didn’t listen when they were told no. No one on this card has been handed anything,” said Stephen Espinoza, President, Sports & Event Programming, Showtime Networks Inc. “They’ve all beaten the odds. I’m proud to have every one of them on this card.

“The great thing about boxing, is that on some level, nothing matters until you get into the ring. To borrow a phrase, ‘boxing don’t lie.’ Boxing is the ultimate truth-teller. When Sunday night rolls around, your resume and your following doesn’t matter. For all the hype and hoopla, make no mistake, these are fights. The purest form of competition. The great thing about boxing is, when two competitors enter that ring, each fighter gets a chance to rewrite their own history. It all comes down to that moment of truth on Sunday night.”

What boxing has to like about Paul is that he’s an advocate for fighters to get paid their worth, and he is giving lesser-known fighters a chance to garner personal-high paydays and throwing greater attention to their brand that a mainstream, younger audience wouldn’t know nor otherwise care about.

“I couldn’t have thought about this and I could not have dreamed about it, fighting here in Cleveland, my hometown, and I’m trying to soak this all in, you can’t get chances like this twice in life,” Paul said. “Woodley is looking good. He’s not messing around. The whole MMA community is counting on Woodley to represent them. I love boxing. My whole life has been a fight. I love knocking someone out.

“I never got anything handed to me. I’m driven by challenges. I grew up and wanted to be a professional athlete. I get a chance to do something once a century. Apparently, I’m a fighter-paid advocate. I’m the only person who has a big platform to speak up on it about MMA, even boxers.

Paul admits his job is to “troll” people. He likes twisting things and flipping it back on people. He takes great pleasure in “pissing off the community,” whether it’s boxing or MMA. At first, he also admits, he comes off loud and obnoxious. But he says there is a method to his levels of crazy.

Paul plays it all very well—like in the WWE, with what they call “a work,” where they play the crowd into thinking what is happening is real.

What is genuine is that Paul can fight. He is 3-0 with victories over nobodies. Woodley may be his fourth victim. He has the skills to be a very good club fighter. Is ready for Canelo Alvarez, well, absolutely not.

Alvarez would probably seriously hurt Paul to the point where a fight like that wouldn’t even be sanctioned anywhere.

But the truth is—people would pay big dollars to see it.

Love him. Hate him. Embrace him. Annoyed by him. Choke on the mere mention of his name. Scoff at his aversion for vowels.

“When I started boxing, I didn’t think I’d be here this fast. My original goal was to fight Conor McGregor or Floyd Mayweather, because I knew I would have a big enough pay-per-view draw to do those things,” Paul said. “Now I want to become world champion. I want to fight and beat Canelo Alvarez. This has been a fast, quick roller coaster ride, but I didn’t expect to be here. I just knew I loved fighting and I knew I was good at it.

“This is an exciting time. I’m bringing it home for Cleveland. We knew that when we teamed up with SHOWTIME, that this would be a huge event. This is turning into a historic moment.”