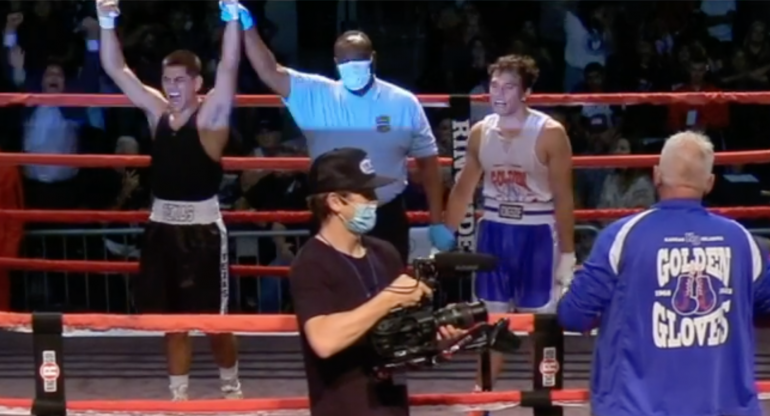 For the first six minutes of their National Golden Gloves final, Giovanni Marquez and Carlos Hernandez showed off their individual skillset, with Hernandez of the Kansas-Oklahoma team showing off his quicker hands and combinations, and the Texan Marquez bullying forward with his stronger punches and stiffer jab.

With the men’s 152-pound title on the line, the two young men were forced to show their heart. What transpired on Saturday evening was a classic round in American amateur boxing.

Marquez, the son of former IBF junior middleweight titleholder and 1992 U.S. Olympian Raul Marquez, sensed that Hernandez was fading, and charged out of the corner swinging for the fences. Marquez landed with several haymakers to score a standing eight count. But Hernandez wasn’t finished just yet, and when Marquez came out for the finish, Hernandez caught Marquez with an overhand right counter to score a standing eight of his own.

The two traded blows to the final bell. But when it was all said and done, it was Marquez of Houston, Texas whose hand was raised, winning by a 4-1 decision. The 20-year-old Marquez joined women’s 132-pound champion Neida Ibarra of Kansas/Oklahoma as the Outstanding Boxer of the Tournament.

Though he couldn’t be at the bouts in Tulsa, Okla. due to his work commentating fights for the Showtime Championship Boxing card in California, Raul Marquez says he is overjoyed at his son’s first national tournament victory.

“I’m the happiest Dad in the world,” said Raul Marquez, whose own amateur pedigree includes earning a bronze at the 1989 World Championships in Moscow, plus U.S. national titles in 1989 and 1991.

“Gio and I worked so hard for this. I told him we are going to win National Golden Gloves and get the Outstanding Fighter award. It happened. He deserves it. Hard work and dedication.”

Marquez, who has been fighting since age 12, fell short in the 2020 U.S. Olympic trials, losing a 4-1 split decision to eventual Olympic representative Delante Johnson, but Marquez says he plans to pursue qualifying for the 2024 Olympics in Paris.

Marquez was one of seven champions Saturday from Texas, leading all off the participating Golden Gloves franchises. They were followed by Florida, NY Metro and Omaha, which all had two.

The National Golden Gloves tournament, which began on August 9, was the first since 2019, as the tournament was canceled in 2020 due to the COVID-19 pandemic.