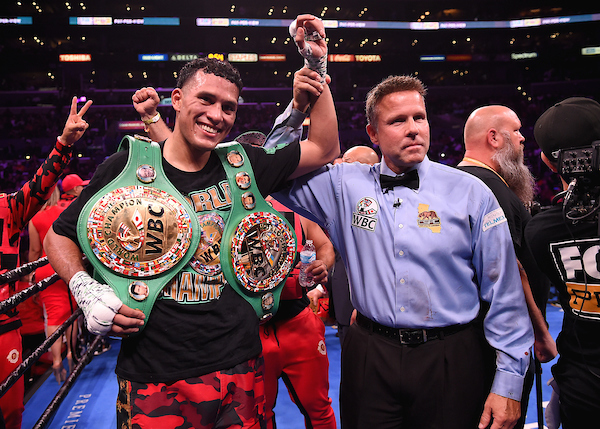 David Benavidez, The Ring’s No. 1-rated super middleweight, has tested positive for COVID-19, and his scheduled August 28 Showtime main event against Jose Uzcategui is off.

ESPN’s Mike Coppinger was the first to report the story.

This is just the latest setback for Benavidez, one of boxing’s rising young talents who has endured several bumps in his career due to his own making.

He was stripped of the WBC 168-pound title in 2018 following a positive test for cocaine. After regaining the belt, he was stripped a second time in 2020 after he missed weight for his bout against Roamer Alexis Angulo. In both reigns, the 24-year-old Arizona native failed to make a single defense.

Benavidez (24-0, 21 knockouts) last fought on March 13, when he scored an 11th-round knockout of Ronald Ellis in Connecticut.

Uzcategui (31-4, 26 KOs) is a Venezuela native based in Mexico. He held a super middleweight title before losing it to Caleb Plant in 2019. He then suffered an upset defeat at the hands of Lionell Thompson 11 months later, following a knockout victory over a journeyman.

Overall, it has been a dismal summer for boxing fans around the globe. The undisputed heavyweight clash between Anthony Joshua and Tyson Fury never got off the ground due to a court order that required Fury to face Deontay Wilder for a third time.

Speaking of Fury-Wilder III, that was initially slated to happen on July 24, but the Englishman tested positive for COVID-19 and was rescheduled for October 9. Furthermore, superstar Canelo Alvarez and the aforementioned Plant could not secure a date for September 18, and fans may have to wait until November for those two to vie for the undisputed super middleweight world titles.

And then came the devastating news on Tuesday as the highly-anticipated megafight between eight-division champion Manny Pacquiao and unified welterweight titlist Errol Spence was off after doctors discovered Spence had a retinal tear in his left eye.

Thankfully, the card will go on as Pacquiao will take on WBA “super” titlist Yordenis Ugas.

But there could be some good news on the horizon. Vadim Kornilov, manager of WBA light heavyweight titlist Dmitry Bivol, confirmed to The Ring Wednesday morning that they are looking at two options for a possible October return to the ring: unified champion Artur Beterbiev and contender Zurdo Ramirez.