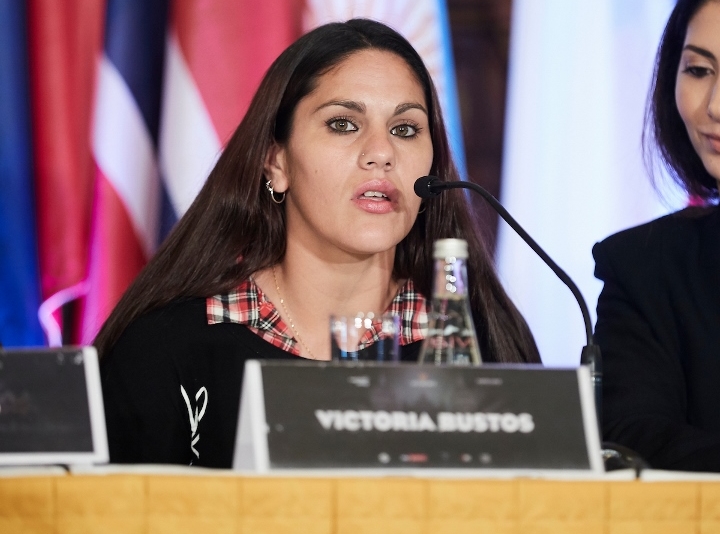 Victoria Bustos has a new opponent for her August 20 bout.

Bustos will now face Jessica Camara at the Sycuan Casino in El Cajon, California, promoter Lou DiBella announced. The 10-round bout, which will have the vacant WBO Female junior welterweight title on the line, headlines a four-bout ‘Broadway Boxing’ card that will stream live on UFC Fight Pass (11 p.m. ET/ 8 p.m. PT).

The 32-year-old Bustos (21-6), who resides in Santa Fe, Argentina, was originally scheduled to fight IBF world titleholder Mary McGee in a unification contest, but McGee had to withdraw after suffering a knee injury during training camp.

“It’s unfortunate that Mary McGee was injured in training,” said DiBella, who is the president of DiBella Entertainment. “I know how excited she was for this title unification against Victoria Bustos. However, Jessica Camara, who will be stepping in for McGee, has earned this opportunity, following her tremendous performance against Heather Hardy.”

Bustos last fought on June 12, defeating Maria Soledad Capriolo by majority decision. She has won her last two bouts since a decision loss to then-undisputed welterweight champion Cecilia Braekhus. Her other notable loss was by unanimous decision to Ring Magazine lightweight champion Katie Taylor in April 2018.

In her last bout, on May 21, Camara (8-2), who resides in Montreal, Canada, overcame a knockdown in the opening round to defeat Hardy by unanimous decision. The 33-year-old has won four of her last five bouts.

The Bustos-Camara fight will be the co-feature to the main event between WBA Female junior welterweight titleholder Kali Reis and Diana Prazak.

The 34-year-old won the vacant WBA title in her last bout, on November 6, defeating Kandi Wyatt by unanimous decision. Reis has won her last four bouts since losing to Braekhus in May 2018, a fight in which Reis dropped Braekhus in the seventh round.

Prazak (14-3, 9 KOs), who is originally from Melbourne, Australia and now residing in Los Angeles, defeated Milagros Gabriela Diaz by unanimous decision in her last bout, on March 13. The victory over Diaz was Prazak’s first fight since losing by knockout to then-WBC titleholder Delfine Persoon.

In an eight-rounder, Alma Ibarra of Monterrey, Mexico will square off against Kandi Wyatt.

Ibarra (8-1, 4 KOs) outboxed Maricela Cornejo over eight competitive rounds to win by unanimous decision in her last bout, on March 18.

Also on the card, heavyweight prospect Elvis Garcia (11-0, 8 KOs) of Xalisco, Mexico will face an opponent to be determined in an eight-round bout.