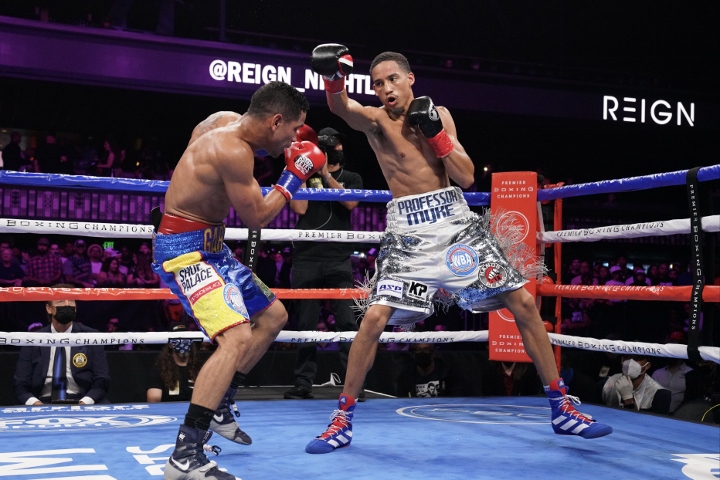 The FOX production assistant was on a special mission. She was asked to go find Mykal Fox Saturday night at The Armory, in Minneapolis, Minnesota. It took her about 30 minutes to track him down.

Fox, the 25-year-old, 6-foot-3½ welterweight southpaw, had poured out his heart out only to get it trampled on an hour earlier in a highly dubious 12-round decision loss to two-time Venezuelan Olympian Gabriel Maestre for the interim WBA world welterweight title.

Maestre (4-0, 3 knockouts) remained undefeated. Fox (22-3, 5 KOs) won the popular vote, even though he should have won the fight after a second-round knockout and thoroughly outboxing 34-year-old Maestre.

Days after the controversial loss, what still resonated with Fox remained being summoned by Hall of Famer Lennox Lewis, who was one of two analysts on the FOX broadcast team, along with noted trainer Joe Goossen, in the FOX production green room.

The production assistant told Fox, “Lennox Lewis wants to see you. He sent me down here to find you.”

Fox and his team followed her.

“Both Lennox and Joe Goossen told me to my face how much improvement they saw from my last fight until now, and that meant a lot, considering how I watched Lennox growing up,” Fox said. “Joe Goossen had me winning 11-1, and Lennox told me he thought I won, 10-2. That was a big moment for me and it told me how people I respect really thought of what I did—and that they thought I won.

“They told me to keep my head up and to keep doing what I’m doing.”

Now, what is boxing going to do about it?

Fox received over 100 text massages, his voice mailbox was filled, and he got thousands of favorable tweets and social media messages seconds after he returned to his dressing room.

When you see decisions so cold like this, it really hurts the sport–Lennox Lewis

“I was gobsmacked, bringing back memories of past fights where people got ripped off, like my fight against Evander (Holyfield, in the draw on March 13, 1999 at Madison Square Garden),” Lewis said. “You look around and you start thinking something fishy was happening here. I wasn’t the only one gobsmacked.

“This is the kind of decision that makes us all look bad. This is a young guy and this could have wrecked his career. No one wins here. Maestre deserves no blame, either. When I got ripped off against Evander, I remember Emanuel Steward saying, ‘This is the kind of thing that is ruining boxing. It’s giving boxing a bad name.’ I’m in this sport, it made me who I am and I don’t want boxing to have a bad name. When you see decisions so cold like this, it really hurts the sport.

“Maestre’s corner knew they were losing the fight. They knew they had to knock Fox out to win.”

Goossen made a cogent point that Fox could greatly benefit from the decision.

“There’s no question Mykal Fox won that fight,” Goossen said. “It was a horrible decision and I’ve seen horrible decisions before. Have I been on the receiving end of some questionable decisions, absolutely? I’ve often said this is one of those rare occasions when a loss is really a win.

“Right now, Mykal has overwhelming support from the boxing community. Mykal Fox’s stock did not go down. If anything, his stock skyrocketed Saturday night. Nobody is going to say Mykal Fox can not fight. I thought he put on a brilliant performance, and Maestre was dangerous the whole night.

“It reminded me of the night Julian Williams beat Jarrett Hurd (May 2019). There were no doubts ‘J-Rock’ won that fight and he rightfully got the decision. But Hurd was a threat every single round. I feel the same way about this fight, even though Maestre kind of stalled in rounds 9 and 10. Mykal Fox stymied Maestre.”

What pisses me off is that you have fighters like Fox who do everything right. He’s a last-minute replacement, he goes out and puts on the fight of his life and gets it stolen from him–Ray Flores

Broadcaster Ray Flores, who was doing the international feed, saw what everyone else in the building saw on Saturday night.

“Maestre knew he lost, just one look at his face tells you that,” Flores said. “After the fight, Maestre wasn’t jumping for joy. He wasn’t happy, because he knows he didn’t win the fight. I don’t blame Maestre for anything. It was clear as day that Fox won that fight.

“What pisses me off is that you have fighters like Fox who do everything right. He’s a last-minute replacement, he goes out and puts on the fight of his life and gets it stolen from him. On top of that, with Maestre, the fact is people are going to look at him in a villain’s role and he doesn’t deserve that. He wasn’t involved in the decision that made him the winner.

“We all lose. We have to do something about the terrible judging in this sport. It has to stop. It’s killing the sport. The guys who deserve to win need to win. Fox had his moment ripped away from him, and it doesn’t matter what the eyes of the public think. As for Maestre, he’ll get booed for no reason because he’s also involved in this.”

Repeated calls to Matt Schowalter, from the Minnesota Department of Labor and Industry Office of Combative Sports, went unanswered by The Ring.

“We are going to take a closer look at the judging overall, because something has obviously gone wrong, so we are looking into it,” Mendoza told The Ring in an exclusive conservation. “We’re also trying to reduce the number of titles for all weight classes. We have to get new judges. I’m really concerned with what is happening.

“This controversy has released a red flag and it has alerted me. We need to make this clean for the public to see and we definitely want to reduce the number of titles. We’re going to do something about this.”

Fox is hoping to get in the ring one more time before the end of the year. He hopes it’s against Maestre, though he doubts it. Fox looked at the replay of the fight twice since he returned home to Upper Marlboro, Maryland. When most fighters usually cringe, picking out their deficiencies while watching replays, Fox saw himself winning 9-3.

“I don’t know if Maestre will take the fight again,” Fox said. “This is what I would call winning a fight without coming out with the decision. It fuels you, because you have a desire to fight for everyone who is fighting for me now.”