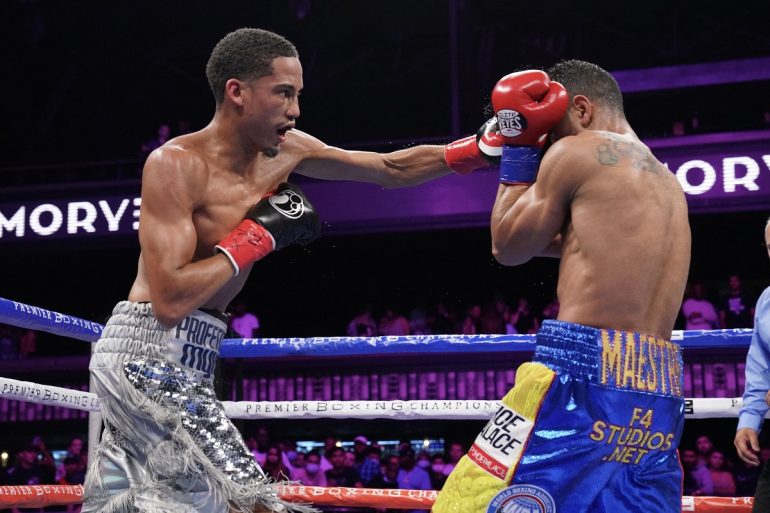 Storyline: Venezuela’s Maestre competed in both the London 2012 and Rio 2016 Olympics. With just three-straight wins (all by knockout) under his belt, the 34-year-old has limited professional experience, but his exceptional amateur pedigree – and advancing age – has convinced his team to take the fast track approach.

Originally, Maestre was to be matched against Canada’s unbeaten southpaw Cody Crowley. However, less than a week prior to the fight, Crowley tested positive for COVID-19 and a late-replacement was sought. Enter 25-year-old Mykal Fox (22-2, 5 KOs).

In Crowley, Maestre had prepared for a 5-foot-10 southpaw with a 72-inch reach. Fox is a 6-foot-3 ½ southpaw with an 81-inch reach. What was the matchmaker thinking? That’s easy! A non-puncher. Fox had been inactive for a full year and was coming off a 10-round decision loss to Lucas Santamaria. If that’s not safe enough, the Maryland-based southpaw suffered a broken left hand in that contest.

With all those champions in one division, the Venezuelan organization (remember where Maestre is from?) thought it necessary to put a WBA 147-pound interim championship up for grabs in this fight. They obviously require a provisional welterweight champ just on the off chance that they lose the other four.

Oh, and after just three professional fights, isn’t it interesting that Maestre entered the ring as the WBA’s No. 4 rated welterweight?

Fight: Fox scored a sharp left-hand knockdown in the second round and boxed beautifully throughout. He had Maestre eating out of his hand for at least nine sessions and was never troubled. His lateral movement was terrific, he controlled distance, he counter punched well, he mixed up his shots and he was defensively sound. Maestre did manage to close the gap and punish the body on a few occasions, but he was outboxed and soundly beaten. At the end of Round 9 I wrote the words “virtual mismatch” in my notes. 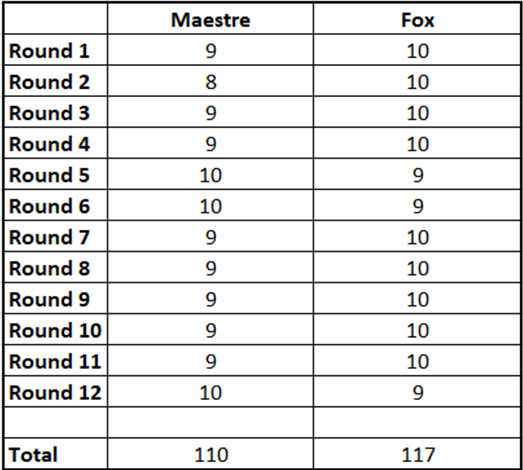 I gave the fight to Fox by a score of 117-110 (nine rounds to three, plus the second-round knockdown). Of the nine rounds I awarded to Fox, I thought eight of them were won decisively. In the fifth and sixth, I felt Fox did more moving that punching, but normal service resumed in the seventh. I had him winning all of the remaining sessions with the exception of the 12th, which he coasted through.

Offending Scorecard: All of them. This was literally one of the worst decisions I’ve seen in my life. How dare anyone suggest that Maestre won this fight. After the decision was announced, the winner signaled that his opponent had moved too much, but Fox was punching off the movement and – for the most part – Maestre’s aggression netted him a sore face. This was a boxing lesson.

Here’s what we had in terms of the officials: Mariano, who had never judged a 12-rounder before, has worked 482 bouts in a 17-year career, predominantly on a preliminary level. He gave Fox four rounds, which suggests that the 12-round distance was too much for him. Rizzo has judged 158 fights in a 14-year career, which is the resume of a part-time official. Obviously she’s out of practice because the numbers she turned in would make someone throw up. Taking the knockdown into account, Rizzo gave Fox just two rounds. Singh has judged 480 fights in a 16-year period, but despite this breakneck schedule he hasn’t learned very much. From what I could find, this was Singh’s first judging assignment on U.S. soil.

Fan/ Expert opinion: The PBC announcing team, who did a fantastic job on the call, was collectively aghast by the official decision. Highly respected broadcaster Brian Kenny asked, “How is it possible?” Acclaimed trainer Joe Goossen called the verdict “horrible!” And former undisputed heavyweight champion of the world Lennox Lewis was “shocked.” The PBC’s unofficial scorer, Marcos Villegas, gave Fox 11 of 12 rounds, awarding Maestre nothing after round one.

Final Analysis: I began this column to place the spotlight on poor scorecards, but more is needed to prevent this craziness. This verdict was so bad that it literally requires government intervention. Unfortunately, the world is so messed up right now that boxing is pretty far down the pecking order.

Last night was not about sport, it was about politics. There is literally no point in a kid like Fox training his heart out for last-minute opportunities if he’s lost before he enters the ring. The numbers say it all. It was literally impossible for Fox to win unless he scored a knockout last night and no one will convince me otherwise. None of those officials should work again and the decision should be overturned.