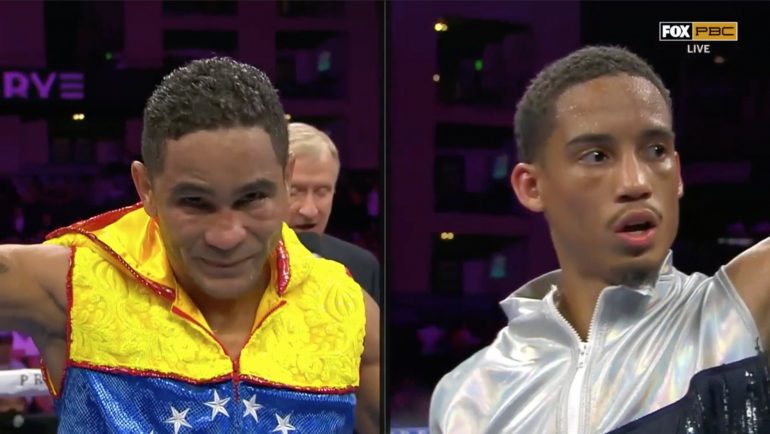 Mykal Fox dominated and outboxed two-time Olympian Gabriel Maestre, which will undoubtedly raise many eyebrows. He dropped the Venezuelan with a beautiful left hook in the second round and barely broke a sweat the rest of the way.

When it came time for the judges to do the right thing, they did the opposite. Judges John Mariano (115-112), Gloria Martinez Rizzo (117-110), and David Singh (114-113) all scored the bout in favor of Maestre in what can only be seen as one of the worst decisions in recent memory.

“I was stunned by the decision,” said Fox. “There’s no way he won more rounds than me. I knocked him down. I hurt him. I don’t know what else I was supposed to do. I don’t know what the judges were looking at. Look at his face and tell me he won that fight.”

The bout, which was the chief support bout of the PBC on Fox card headlined by Eimantas Stanionis vs. Luis Collazo, was initially delayed for ten minutes due to a tape issue that was flagged by Fox’s father and head trainer, Troy Fox. Referee Mark Nelson openly questioned how a Minnesota commissioner signed and approved the taping job.

Early in round two, the 6′3″ Fox sent Maestre to the canvas. However, the Venezuelan quickly recovered and hurt Fox to the body.

Fox (22-3, 5 knockouts), of Upper Marlboro, Md., went back to boxing in round three, dictated the pace behind a stiff jab, and followed up with a slew of shots downstairs that Maestre took well.

Fox continued to outbox Maestre in the seventh round, as he touched him with short shots and evaded danger before his shorter opponent could land a counter.

For a brief moment during the round, the 34-year-old Maestre (4-0, 3 KO) went southpaw in a moment of frustration but could not muster any momentum.

Maestre’s head snapped back late in round nine from a crisp Fox left hand off the jab. As time expired to end the frame, it became clear that Maestre needed a miracle to win the fight.

And that miracle did come, courtesy of the judges.

“Fox fought very well and he deserves a rematch,” said Maestre. “It was a very close fight. If my team says that’s what they want, I’ll be ready to fight him again.”